“A flashback to the 1380th (Persian calendar) shows that this story is still being repeated. There have been reports of large-scale violations by governments, but the result was zero, and in principle, the governments have not taken any responsibility, from Mahmoud Ahmadinejad to Hassan Rouhani.”

Aftab Yazd adds: “As an example, according to the statistics of ‘Abdolreza Rahmani Fazli’, the head of the Court of Audit in February of 2009, during the presentation of the report on budget deduction in 2007, he said: In the report of the budget deduction this year (2007), there are two thousand deviations from the clauses, notes, and rules, that in the shadow of these debates $1 billion has been neglected.

“Ahmad Tavakoli, the head of the Parliamentary Research Center at that time, also wrote in a note to some violations in the import of petroleum products: ‘In 2009, the government imported $ 5.8 billion worth of petroleum products instead of the legal limit of $ 3.8 billion. The law was broken clearly, the parliament was silent in the face of this blatant breach of the law, billions of dollars more than allowed by the law, foreign exchange resources were wasted, and all the damage from increasing gasoline consumption was imposed on the people.’

“Ali Larijani, the then speaker of the parliament at that time, after reading the report on budget deduction in 2007 in the parliament, demanded the investigation of the $1 billion surpluses of oil prices that were not deposited in the country’s treasury. But no investigations have happened.”

The newspaper further wrote: Shahrbanoo Amani wrote in a note in this regard last Thursday: “In general, it seems that the Court of Audit, for whatever reason, does not use its legal powers as it should and perhaps does, and has contented itself with reporting. The Court of Audit must say what practical steps its prosecutors have taken to prevent and oversee the events, that only reports behind the podium were announced, will be a sign of helplessness, and that the result will only be distrust among public opinion and will not be particularly effective.”

Aftab Yazd newspaper wrote: “In the media and the public, it has become clear that an amount of nearly 768 trillion rials has been lost. For an economy that is struggling in recent years, such a figure is staggering.

“The report quickly made a lot of noise, and faced many with the question, when the fate of such money is unclear and no one knows about it, how the government has been consulting for more than a month, that the International Monetary Fund (IMF) should lend $ 5 billion in loans, to be a cure for the corona pains in health and economy.”

In tandem with this news is the shocking act of the regime’s supreme leader Ali Khamenei. While in recent days the non-use of large financial resources of foundations and monetary giants under Khamenei’s control to counter the corona has been severely undermined inside and outside Iran, Khamenei has launched a special section to receive financial assistance for the victims of the coronavirus on his website. 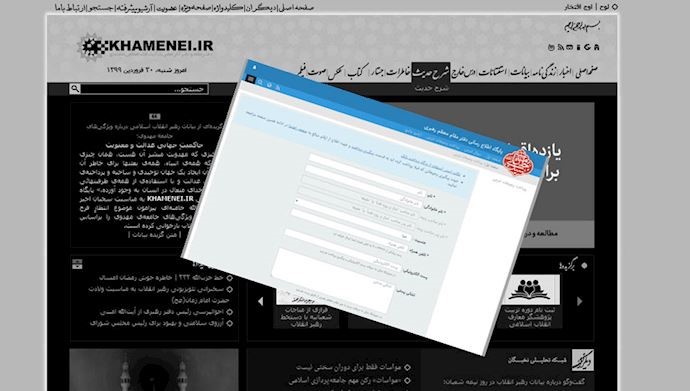 On 16 April, Khamenei’s website wrote in an ad under the pretext of confronting the coronavirus:

“The information office of the Supreme Leader’s Office has activated the option of financial assistance to the victims of coronavirus. Those who are interested in entering the site and referring to the payment section of Sharia funds should choose the section to help the victims of Corona.”