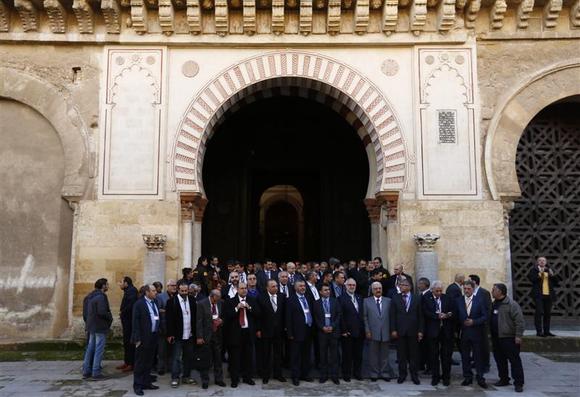 After nearly three years of conflict the opposition has fractured into competing groups with different regional backers and the West is pushing to gather a unified body of opposition members to attend negotiations on January 22, dubbed "Geneva 2".

Prospects for progress at the talks in Switzerland appear dim. Assad, buttressed by recent military gains and a wave of rebel infighting, has flatly ruled out demands from the weakened opposition that he stand aside.

The two-day meeting in Spain brings together members of the Western-backed National Coalition but also delegates from opposition groups inside Syria that are tolerated by Assad as they do not call for his removal - and are therefore distrusted by many exiled opposition members.

"Most colors from Syria are represented here. There is even one person from Syrian security who supports Assad," said veteran dissident Kamal Labwani.

At least three members of the Islamic Front had also come, he said. The front is made up of several Islamist brigades which represent a large portion of fighters on the ground and reject the authority of the National Coalition.

"We want them to be here. We will listen to them," Labwani said. Differences between the delegates were too deep to bridge at the meeting, he added, but it would aim to create a dialogue among them.

Diplomats say the gathering is recognition that the divided National Coalition - which has yet to formally accept an invitation to attend Geneva 2 - is losing influence on the ground and a more comprehensive grouping is needed ahead of the talks.

Rebels from the Western-backed Free Syrian Army were also at the meeting in Cordoba, a venue chosen by the Spanish government because of its historical importance as the capital of the Islamic caliphate during the 10th and 11th centuries AD.

Delegates, including the rebel representatives, toured Cordoba's Mezquita, a medieval mosque encompassed by a cathedral.

A representative from Liwa al-Islam, a brigade that works with the Islamic Front, told Reuters he was attending the meeting but gave no further details of his role.

Opposition figure Fawaz Tello, one of the meeting's organizers, said Cordoba was prepared three months ago to encompass the "whole spectrum of the Syrian opposition. To sit together and define a mutual vision".

"This is not for the election of another leadership or to decide the delegates for Geneva," he said.

Assad's forces have recently been gaining ground against rebel fighters backed by the opposition and he faces little pressure to make concessions. At the same time, radical Islamists distrusted by the West have taken a bigger role in the campaign to oust Assad.

"We are gathered here today despite our different views to try and reach a consensus that can save our people," Sheikh Mohammed al-Yacoubi, an opposition Muslim cleric, said at the start of the meeting, which will last until Friday evening.

Syria was plunged into civil war after an uprising against four decades of Assad family rule erupted in March 2011 and descended into an armed insurgency after the army cracked down on protests.

More than 100,000 people have been killed, more than 2 million refugees have fled abroad and another 6.5 million are displaced inside Syria.

The opposition wants the talks in Switzerland to create a transitional authority for Syria in which Assad plays no role, but his government says it will not surrender power and that the president will remain in control.

Geneva 2 has been plagued by delays and sticking points, such what role there might be for Iran, Assad's main backer. The United States does not want Tehran to participate directly, suggesting it might be involved on the sidelines.

A copy of the invitations for the Geneva 2 meeting obtained by Reuters said the talks should implement an international accord in Geneva 18 months ago which called for the establishment of a fully empowered transitional body - a phrase which Assad's opponents say means he must relinquish power.

The invitations say confirmation of attendance will be interpreted as acceptance of the conference goals and the "principles and guidelines for the transfer of power by Syrian hands".

Damascus says the talks should focus on combating terrorists, the label it gives to all armed fighters battling to overthrow Assad.

But French Foreign Minister Laurent Fabius said on Thursday it was clear that Geneva 2 - if it did take place - should be about creating the transitional authority which would assume Assad's authorities.

"I hope (Geneva 2) will take place, but I'm not sure that it will," he told parliament.