Iran: Who Is Kazem Gharibabadi?

Following the recent protests in various areas, particularly in the southwestern province of Khuzestan and the capital Tehran, authorities severely try to restrict citizens’ access to the internet and social media.

“With the study of the plan for preserving users’ rights in cyberspace and organizing social media under article 85 of the constitution, members of the Parliament (Majlis) agreed with referring the plan to a special commission for more assessment and potential reformations,” wrote ICANA news agency, affiliated with the Majlis, on July 28.

According to the plan, which was already published by Hamshahri daily, not only does the method not ensure users’ rights in cyberspace, but it also intends to abolish the entire users’ rights through censorship and filtering. In this respect, Morteza Agha-Tehrani, Chair of the Majlis Cultural Commission, explained that the plan belongs to the entire government rather than the Majlis.

“Agha-Tehrani has claimed that the National Center had approved the Majlis’s plan for restricting the internet for Cyberspace, real members of the Supreme Council of Cyberspace, and executive apparatuses,” Jamaran website published Agha-Tehrani’s handwritten note on July 27. 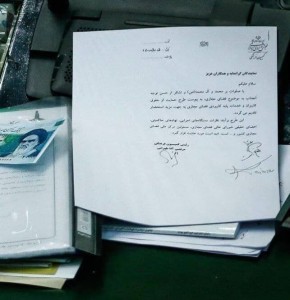 On the other hand, officials and state-run media expressed their concerns over the implementation of this plan. They warned officials about the eruption of public ire against the entire ruling system, demanding the Majlis avoid executing the plan.

The confusion even opened its path into the Majlis, and several lawmakers issued warnings over the plan and its social consequences. “This is a bitter day for the Majlis. The Majlis that avoided holding an unofficial session for the water shortage in Khuzestan province, coronavirus in Sistan & Baluchistan and Golestan provinces, and general vaccination process, today holds a session behind the closed door for ‘preserving users’ rights,’” said Moin al-Din Saeedi, MP from Sistan & Baluchistan province, on July 28. “I apologize the great nation of Iran. Today was not a good day for our Majlis.”

“If we would like to genuinely see the real concerns of users, who are the people, in cyberspace, today, we witness a large number of referees, who declare their concerns following the discussion over the plan. Currently, cyberspace has become one of the main fields for business, and with a glimpse at the plan’s clauses, we realize that it will harm many small businesses,” said Hassan Mohammad Yari, MP from the northern province of Gilan, on July 28.

In this respect, it is noteworthy that the plan will endanger at least three million small businesses, according to official stats. On November 21, 2019, the Persian-language edition of Euro News quoted NetBlocks.org as reporting, the expenditure of four-day internet blackout was tantamount to $244.7 million.

Moreover, Setareh-e Sobh daily described the Majlis’s attempts for passing the plan as ‘milk the ram.’ “Milk the ram is not a good action. The people will finally find a path for circumventing it, and this legislation will be futile such as many laws about prohibition and restriction of internet, which have been passed in the past decades. They were expensive in implementation and fruitless in the outcome,” wrote Setareh-e Sobh on July 28.

Also, Hamdeli daily blamed lawmakers, writing; the Majlis has ‘lost priorities.’ “During recent years and in various landmarks, the Majlis has proved that not only has it forgotten its task and refused to stand along with the people, but also it has stood against the people in several cases. Hence, it is not an ignorance of priorities alone. The behavior of several lawmakers is considered as an insult to the people and a pertinacity to the nation,” Hamdeli added.

Furthermore, some media and officials describe the plan as playing with fire and express their concerns over its social consequences. For instance, Ali Reza Zakani, the former Presidential candidate, said, “Filtering is a devious path shows [the planers] are unaware of cyberspace.”

In a video, Hassan Khomeini, the grandson of Islamic Republic founder Ruhollah Khomeini, mentioned that the dogmatic confrontation with technology and cyberspace is fruitless. “The main parameter for a law to succeed is that the people realize that it is a necessary norm. Otherwise, society sees it as an unnecessary imposition,” he said.

Also, Mohsen Rezaei, the former Presidential candidate, declared his objection to the plan. “The dear people of Iran have rights to ask, ‘while the society faces various economic dilemmas and difficulties, what is the necessity for passing the so-called plan of preserving users’ rights in cyberspace?’” Rezaei tweeted on July 28.

However, Yadollah Javani, the IRGC deputy chief for political affairs, highlighted the state’s actual concern, pointing to the organized opposition to the Islamic Republic. “According to Javani, youths and the people who are under the effect of cyberspace and satellite channels should be careful not to be deceived by the Mojahedin-e Khalq (MEK/PMOI) tricks and slogans,” Dana website quoted Javani as saying on July 28.

Moreover, the Young Journalists Club (YJC), affiliated with the IRGC, showed the real concerns of the entire ruling system over the MEK’s influence on society. To demonize the MEK and pave the path for suppression, the website falsely accused the MEK of driving social protests to violence. This is while authorities mercilessly respond to any objections by tear gas and live ammunition.

“MEK members attract their targets’ opinions, then recruit them. With a close relationship with their targets, they radicalize their thoughts for social activities. Disappointing people and exaggerating the events, which fuel the people’s protests, are one of the most important tasks for the MEK in cyberspace,” YJC wrote on July 27.

Indeed, the IRGC and different media explicitly clarify that their main concern is about the MEK’s popularity among citizens, particularly the young generation. In this respect, to prevent social protests, they try to completely ban cyberspace and social media, making Iran such as North Korea, and keeping the people in the dark to ensure their illegitimate and outdated ruling system.

Iranian Cleric: Coronavirus Is a Misunderstanding