Iran: An Anniversary of Religious Persecution 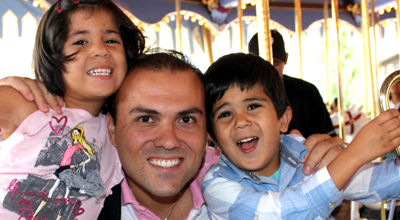 INU - Friday marked exactly two years since the arrest of Iranian Christian convert and pastor Saeed Abedini. In those two years, he has been subject to lengthy solitary confinement, repeat beatings by prison officials, denial of medical treatment, and death threats from Muslim militant co-prisoners, all stemming from his arrest on charges of proselytizing for Christianity.

Iranian by birth, Abedini moved to America with his family after his conversion, in order to escape religious persecution. However, he returned to his native country in order to help support the system of home-based worship that the Christian population relies on in absence of the right to practice their faith in public. Despite having been previously arrested and forced to abandon his home-church activities in 2009, Abedini returned to Iran in 2012 to help build a non-sectarian, state run orphanage, at which point he was arrested and accused of undermining state security by spreading the Christian faith.

The two year anniversary of that arrest, which brought an eight year prison sentence for the Christian pastor, has been marked by worldwide Christian prayer gatherings on his behalf. Christian News Network reports that 500 such gatherings were scheduled for locations in the United States, Mexico, Kenya, and elsewhere. They were preceded on Thursday by a similar prayer gathering in front of the White House, attended by hundreds, including Abedini’s wife Naghmeh.

It is unclear whether Iranian Christian communities will participate in this international prayer vigil, though it is likely that they will, even if their gatherings must be held in secret. According to the Christian Institute, the latest figures indicate that there are currently about 400,000 Christians in Iran, and that that number grows by approximately 20 percent every year. This has naturally led to increasing demand for Christian resources, and the Christian Institute reports that a project is underway to deliver 300,000 copies of a new Farsi translation of the Bible to members of the underground Iranian Christian community.

These communities face institutional oppression if they make themselves socially visible, but in Iran even being allowed to practice one’s faith publicly does not eliminate the possibility of later religious oppression. This fact was tragically on display this week when it was revealed that Mohsen Amir Aslani, a former psychologist and theology instructor, was executed on Wednesday morning, following eight years of secretive imprisonment.

IranWire reports upon his case and points out that he was charged with heresy because of the nature of some of the questions he raised in his religion classes, as well as the fact that some attendees of those classes were under scrutiny by Iranian intelligence. Aslani was also charged with insulting the prophet Johan because he determined that it would have been impossible for a person to literally enter and then leave the belly of a whale.

Aslani’s family was reportedly made to believe that he would be released without incident if they did not make his case known, so there had been no media attention given to it for eight years. But during this time, Aslani was repeatedly taken to solitary confinement and made to believe that his execution was imminent. At dawn on September 24, it was finally carried out.

Since Aslani’s case was not publicly discussed, it was probably unknown to the ten civil rights activists who gathered outside of Iran’s notorious Evin Prison on September 22. They gathered to protest for the release of four recent victims of politically-motivated arrests and were met with a disproportionate response from state security forces. Human Rights Activists News Agency reports that the ten protesters were surrounded by 70 anti-riot police officers wielding batons.

The protestors dispersed only after prison officials allowed the mother of one of the arrested individuals to visit him, at which point she was promised that he would be released on bail in two to three days.