With that in mind, we wanted to talk a little bit about the massacre of MEK members and how the perpetrators have never been held accountable.

The massacre
In the summer of 1988, then-Supreme Leader Ali Khamenei issued a fatwa calling for the execution of the MEK because he was worried that they would inspire the people to rise up against him and overthrow the Regime.

The MEK members were already serving or had already completed prison sentences for their peaceful political activism, but were retried in five-minute court sessions with no option to prevent a defence. The only way to evade the noose was to repent their political beliefs and ‘volunteer’ to remove landmines from the area between Iran and Iraq.

The MEK members were hanged en-masse and buried in secret mass graves, which leaves the exact number of MEK members killed unknown. In subsequent years, the Regime has tried to destroy these mass graves to cover up the massacre, which has caused Amnesty International to urge the UN to launch an investigation. 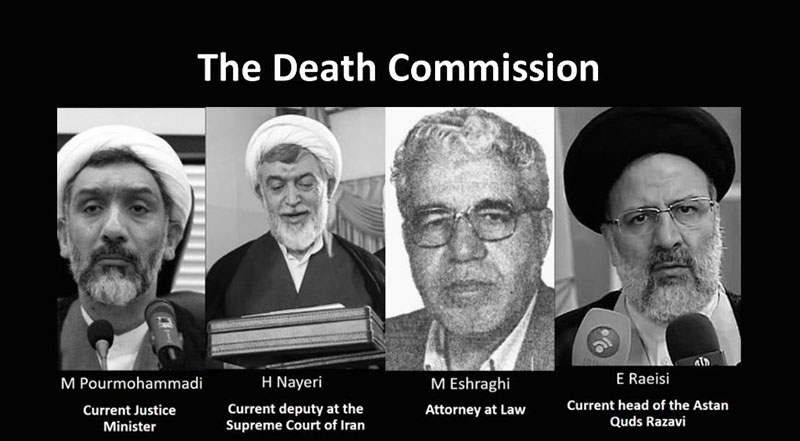 Raisi’s involvement
At the time Raisi was the Tehran prosecutor, having risen quickly through the ranks because of his suppression of MEK members.
He was appointed to the Tehran Death Commission, alongside Mostafa Pour Mohammadi, the Regime’s Minister of Justice until 2017, and sentenced thousands of people to their deaths after meaningless show trials.

We know this because in 2016, an audio recording of former second-in-command of the Iranian Regime, Hossein Ali Montarezi, admonishing the Tehran Death Commission for the massacre of the MEK was released. In it, he addresses both men specifically, while confirming and condemning the massacre.

Defending the massacre of MEK members
Prior to this recording, the Regime had denied the massacre, but since they have focused on justifying it.

Pour Mohammadi openly stated that he was “proud” to carry out “God’s command” of death and while he was replaced as Justice Minister in 2017, President Rouhani appointed another former death commission member, Alireza Avaie, in his place.

Tahar Boumedra, the former chief of the human rights office of the United Nations Assistance Mission for Iraq (UNAMI), said: “These and other high-profile appointments have sent the clear message that the regime stands by its past acts of violent oppression and has no interest in rehabilitating its image.”

Therefore, the Regime cannot be trusted to carry out a full and impartial investigation into the MEK massacre and this should be passed to the UN.

What does Raisi’s appointment mean for the MEK today?
It is very worrying because it implies that the Regime is planning a more severe crackdown against the MEK, who are currently leading the largest ever anti-regime protest movement.
Even so, it is unlikely that the MEK will be deterred. The MEK will fight on until Iran is free.