On April 28, the agents of mullah Rouhani’s government beat the female prisoners in the search of prison under the pretext of carrying cigarettes. According to reports from inside Iran the authorities of this prison have recently prohibited smoking cigarettes. It has been announced that the pretext of this brutal search and beating the prisoners was hiding some cigarettes by a number of prisoners. 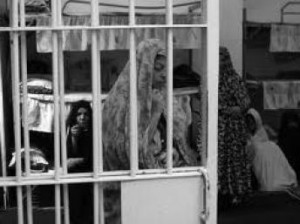 Female prisoners with general convicts are held in Qarachack Prison. It has an inappropriate condition regarding the general facilities and many times human rights organizations warned about the chaotic situation and the violent attitudes of the authorities of this prison but it fell on deaf ears.

On April 27, the prison guards had attacked the women’s prison in Shahre Rey (near Tehran) and had injured the defenseless female prisoners. This attack had been totally carried out under the supervision and with the emphasis of the prison authorities.

Twelve days ago, the agents of Tehran’s Evin Prison had attacked and beat the prisoners, particularly the political prisoners, under the pretext of searching section 350. So that a number of them have been hospitalized and a number are now on hunger strike protesting this attack.