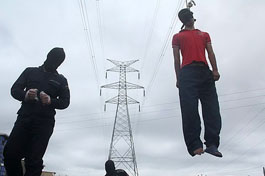 According to a report, another prisoner has been hanged in the main prison in the city of Zahedan.

On Saturday, June 7, four prisoners were collectively hanged in the Shahr-e-Kord Prison.

At dawn on Sunday, June 1, simultaneously with the execution political prisoner Gholamreza Khosravi of the People’s Mojahedin Orgnaization of Iran (PMOI/MEK), the regime secretly hanged eight other prisoners in the Karaj Gohardasht Prison.

On the same day, another prisoner was executed in the prison of Semnan (central Iran)