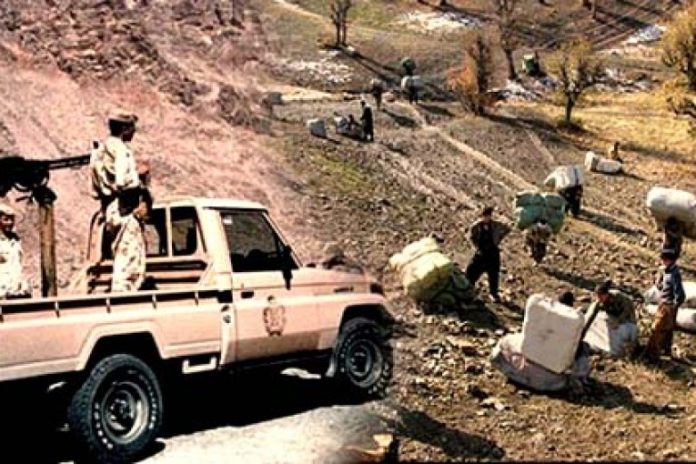 The terrible unemployment situation in Iran caused the number of people who support themselves by working as porters to increase, and today there are very young children and elderly men and women becoming porters, as well as university graduates.

The job is dangerous, but these people are desperate. Porters must deal with extreme weather conditions and uneven terrain and are targeted by the State Security Forces.

It’s been reported that over the past few months, several porters have been killed. Then on Monday, two porters, Heydar Faraji, 21, and Qader Bahrami, 45, were shot by the regime’s border guards. Bahrami was married and had four children.

On Tuesday, the entire bazaar was shut down as merchants closed their shops. Thousands of people from throughout the city joined together to protest these crimes. They went to the governorate, threw rocks at the governor’s building, and demanded that the killing of the porters end.

The regimes’s forces stormed the protesters and fired tear gas, but the protesters didn’t back down, but confronted them instead, and neutralized the tear gas by burning tires.

Military helicopters brought anti-riot guards to the scene in Baneh. They attacked the people, but they were not able to prevent the them from continuing their protest.

A number of people were injured, and many were arrested during the course of the demonstration. It is believed that the criminal governor of Baneh, frightened of the angry people, has fled, and is hidden in an unknown location.

According to an article published by the National Council of Resistance of Iran (NCRI), President-elect of the Iranian Resistance, Mrs. Maryam Rajavi, has “offered her condolences to the families of the porters, saluted the people of Baneh and their brave demonstrations, and called on the courageous and freedom-loving people of Kurdistan and other Iranian cities to support the people of Baneh and the toiling porters.”

The NCRI adds that, “The porters are being killed by the Revolutionary Guards while according to the regime officials, Khamenei and the Revolutionary Guards and other intelligence and security agencies of the clerical regime are the main conductors of smuggling in the country that, according to the regime authorities, amounts to $25 billion a year.”

Earlier this year, on March 7th, at a press conference in London, the Iranian Resistance revealed the presence of 90 piers, which amount to approximately 45 percent of the country’s total number of piers, that are used for large-scale smuggling, and are mainly at the disposal of the IRGC.