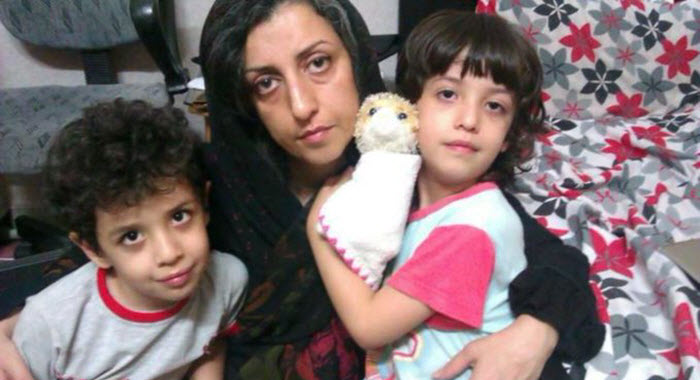 The right to such calls had been arbitrarily and unofficial revoked for Mohammadi after she was sentenced to an additional 10 years in prison on top of the six-year sentence she was serving at the time. As Amnesty points out, the charges all stem solely from her peaceful political activities, and so the international human rights organization urges its supporters to write to Iranian officials urging Mohammadi’s release, the continued defense of her right to communicate with her children, and medical treatment for the health issues that worsened as a result of her hunger strike and former denials of medical attention.

The apparent attempt to use Mohammadi’s children as psychological leverage against her is reminiscent of another case that has been in international headlines in recent weeks, namely that of Nazanin Zaghari-Ratcliffe, an Iranian-British dual citizen who was arrested on vague suspicion of espionage while on a trip to visit her parents in Iran.

As well as taking Zaghari-Ratcliffe into custody and holding her for what has now been more than 100 days, the Iranian regime also confiscated her two-year old daughter’s passport, leaving her in the care of her Iranian grandparents and unable to rejoin her father in Britain.

Although it is conceivable that these cases could have involved the arrest of fathers instead of mothers, it is also conceivable that the involvement of small children in the existing cases serves a purpose within Iranian propaganda, essentially sending the message that women who become involved in political activities or international coordinating automatically put their children at risk.

For the past few years, Iranian officials have been working to find ways of enforcing Supreme Leader Ali Khamenei’s edict that women should remain in the home to a great degree and have large families beginning at an early age. As a part of this initiative, the regime has made considerable efforts to separate women and men in public.

Since May, at least six mixed-gender parties have been raised, resulting in dozens of arrests and prosecutions in each case. Rules governing the gender segregation of workspaces and public parks have intensified, and last week the Independent reported that authorities have begun posting signs banning women from riding bicycles, and have arrested some women for the “offense,” subsequently forcing them to sign pledges not to appear on the prohibited method of transport in the future.