The traditional ceremonies of this national festivity have been kept alive through the centuries in Persian culture. During the festival, Iranians light bon fires and jump over them singing: “zardi-ye man az toh, sorkhi-ye toh az man”. The literal translation is: “my yellow for you, your red for me”

This sentence indicates a ceremony for cleansing. In other words, people want the fire to take away their paleness and diseases and replace it with redness, which is warmth and energy. Chaharshanbeh Souri is not a festival for any particular religion or ethnicity, but it is celebrated by almost all Iranians.

The reactionary regime in Iran has criticized this celebration on many occasions and declared it banned since 1978. Every year scores of people, especially the youth, are arrested and sent to prisons.

For example, supreme leader Ali Khamenei has condemned this ceremony many times. In his speech in Mashhad, northeastern Iran, he criticized Chaharshanbeh Souri and considered it against state beliefs. In response to a question regarding this matter he has said that Chaharshanbeh Souri brings harm and corruption and must be averted.

Nasser Makarem Shirazi, a pro-state cleric, declared Chaharshanbeh Souri as religiously illegal. Iranians, in particular the youth and the Iranian Resistance, hold this festival every year, even at the price of scuffles with suppressive security forces. 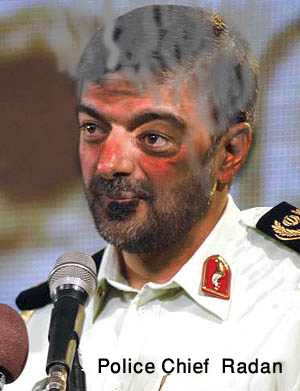 Iranian regime’s helplessness in controlling Fire festival: For the sake of birds don’t participate in this festivity

18 March 2014- Fars news agency, affiliated with the revolutionary guards, in an article published on March 18, the day of Fire festival, pleaded with the youth not to participate in the celebration and wrote: “In the Fire festival ceremony, using the firecrackers and making noises in many cities causes the birds to flee. Some of the smoke of the firecrackers goes into the eyes of the birds and they can no longer fly. Also some of them are affected by the wave of the explosions and flee the cities where people are jubilant. We should note that birds cannot talk to express these things to humans as to how they have been affected by waves of explosions. It should not be that with the excuse of Fire festival, we have acute sound pollution and to endanger the greenery of the country. Because of the sharp lights given off in the cities, the insects are attracted to these lights and destroyed and hence the birds are left without food…”

At the same time in the recent days, the Iranian government has been reporting the discovery of all kinds of firecrackers and the arrest and imprisonment of a large number of people. Ariya news agency of March 18 quoted Mohammadreza Mirzaii, the Security Commander of Semnan Province (central Iran), as saying: “Since the outset of confiscation of the explosive material, 210697 firecrackers of all kinds have been discovered in the province.”

He said: “To prevent these festivities, many meetings have been held with different bodies such as the revolutionary guards, the Ministry of Education, the Radio and Television, and the municipalities; and 25000 brochures and posters related to Fire festival have been distributed in the province. Nevertheless, if people are arrested during the Fire festival, they will be sent off to prison. So far, 115 people have been arrested and 453 shops have been searched.”

Since every year this ceremony is turned into an uprising by the youth against the Iranian regime, a nationwide campaign has been announced to control the youth. Similarly yesterday, Mostafa Ariya, mayor of Shiraz (a city of tourist attraction in central Iran), said: “All security, military and control measures have been envisioned for Fire festival. If people are arrested in this ceremony, they will stay in prison till the end of the New Year holidays that start on March 20 or even longer. We shall be firm in confronting this ceremony so that Fire festival will not turn into Fire festival.” He went on to advise the people to be mournful on these days due to religious excuses.

Provincial Military Commander: A number of boys and girls were apprehended in two night parties

18 March 2014-The Provincial Military Commander of Mazandaran (northern Iran) reported on the arrest of a number of boys and girls in two mixed-gender night parties.

The Mehr news agency reported on March 16 quoting Massoud Jafari: “Once the Police Moral Security agents got tipped on a night party, they entered into action and apprehended a number of boys and girls. In the inspection conducted on this villa, some alcoholic beverages were discovered and the culprits were handed over to the judicial authorities and sent to prison. During the investigations it was found that most of the arrestees were from cities of Tehran and Rasht who had been invited by the owner of the villa through the internet.”

This military officer added: “Also last week, the agents were tipped on a mixed-gender party in the city of Sari (northern Iran) where they were playing music and boys and girls were going there. A team of officers entered into action and apprehended four boys and thirteen girls in this party and sent them to prison.”

At the end he warned: “Parents should employ a better supervision over their children, especially the youth, and if they want to go to a party, they should accompany them to the place.”

In similar raids to parties on various pretexts and mostly because of the mixed-gender charge, a number of the participants are arrested. In a similar case in Mashhad (northeastern Iran), in a raid by the security forces on a house, the hand of one of youth who was attempting to get away was broken and he was subsequently sent to prison.

Celebrations to mark the Iranian New Year have been banned in the city of Yazd, where officials believe they could be used to protest against the theocratic regime.

Authorities in Yazd have approved a directive banning ‘any celebration and music concert from March 14 to April 4 in locations belonging to the city’s municipality’.

The ban will cover events at all parks park, public squares, amphitheatres, sports halls – but holding events that does not include ‘happiness’ would still be permitted, state news reports said.

The Iranian New Year, or Nowruz, on March 21 marks the first day of spring, and celebrations traditionally begin on the last Tuesday of the year ending with the Fire Festival.

Iranians mark this by lighting fires and jumping through the flames, and also use the festival to air their grievances against the mullahs’ regime, which constantly fears it could trigger mass nationwide protests.

In recent years, security forces have cracked down on the celebrations, banning the sale of firecrackers, sparklers, rockets and home-made grenades months ahead of the event.

High ranking clerics and the Supreme Leader Ali Khamenei have also issued a decree stating that the Fire Festival is harmful and has no religious basis. 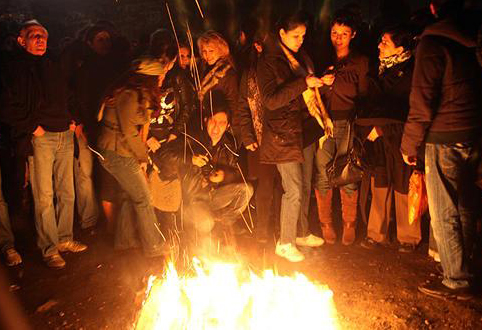 wave of arrests as the Iranian Fire Festival approaches

At dusk on Tuesday, March 18th, the historical Fire Festival, with origins dating back to 1700 BC, is held in Iran. This festival has been banned since the onset of the clerical regime, considered against regime’s interests. Every year as this national ceremony approaches, security forces are placed on alert and the regime publishes daily reports firecracker confiscations and arrested youth.

Fars news agency, affiliated with the Revolutionary Guards, March 3 – Discovery of 16,000 packets of firecrackers in the city of Karaj [near Tehran]: Seyyed Hossein Seyyed Haqiqi, commander of the security forces in Karaj Township, reported the discovery of 16,000 packets of firecrackers in this city and said: “the plan to confront the producers, distributers and sellers of illegal firecrackers in the Karaj Township is being implemented and the police shall severely deal with the transgressors.” He did not state the number of the arrestees.

Fars news agency, March 3 – Discovery of 6,750 firecrackers in Shahr-e Bahar [a small town west of Iran]: Commander of the security forces in Bahar Township reported the discovery of 6,750 firecrackers in this township and said: all the illegal items discovered, along with the culprit, have been transferred to the intelligence police of the township. The indictment was filed and the arrestee transferred to prison. 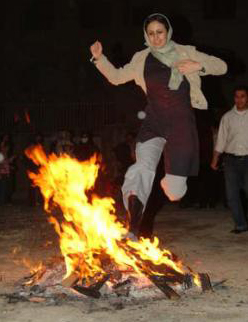 In the latest series of statements by the Iranian regime officials and clerics criticizing the annual fire festival, another senior cleric on Friday defined the fire festival as “Bad tradition.”

Cleric Mohammad Saeedi, the so-called Friday Prayer Leader in the city of Qum, was quoted by a state-run news agency as saying on 1 march : “Chaharshanbeh Souri (Fire Festival) is considered as another bad and improper tradition.”

The Iranian regime has been attempting to outlaw the nation’s ancient fire festival because it represents ‘negative cultural behaviour’ that poses a threat to the ruling dictatorship.

The population has traditionally used the event on the last Tuesday of the Iranian year to air their grievances against leaders of the clerical regime.

In recent years, security forces have been cracking down on celebration up to two months before it begins by banning firecrackers, sparklers, rockets and even home-made grenades.

The Supreme Leader of the regime, Ali Khamenei, has issued a religious decree against the celebrations, saying that Festival of Fire “has no religious basis and is harmful and must be avoided.”

Festival of Fire is a ritual leading up to the New Year on the first day of spring on March 21. To celebrate, people light up bonfires on the last Tuesday night of the year and jump over the fires singing a popular verse hoping for the deflection of the “yellowy paleness” of last year’s ills and inviting the “red vitality” for the coming year.

The powerful symbolism of Festival of Fire injects a terrifying chill in the leaders of the clerical regime. Every year the event is coupled with chants of “death to dictator,” serves as a potent reminder that Iranians are as resolute as ever in their arduous quest for democratic change. 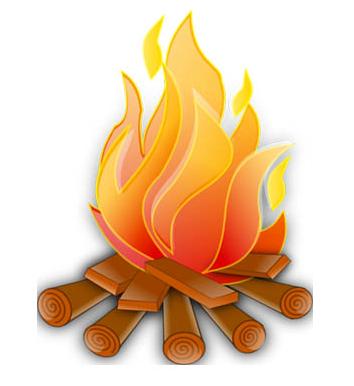 The Iranian regime has begun a crackdown ahead of the traditional Iranian fire festival which precedes Iranian New Year. The regimes security forces have undertaken a series of moves to discourage celebrations, and have attempted to confiscate firecrackers and other materials which they deem to be “dangerous”. This includes reports of seizing large quantities of explosives in Qazvin, as reported by Fars News. The regime continually casts these moves as being done in the name of safety and security, when in reality they are undertaken to strike fear in the public and discourage them from gathering in the streets and potentially airing their grievances against the regime.

The Iranian fire festival traditionally involves the building of bonfires in public streets, with participants jumping over them and setting off firecrackers to celebrate the festival. The festival normally attracts large numbers, gathering in parks, squares and city streets. The regime has viewed the the gathering as a potential threat to security, particularly over the past few years, as it has the potential to serve as a platform for opposition to the regime, particularly among young Iranians. Past celebrations have included Iranian youth burning pictures of Khomeini and Khamanei during the festivals, while others have chanted anti-regime slogans while in large crowds.

The regime has attempted to claim that the celebration is un-islamic and encouraged individuals to stay at home.