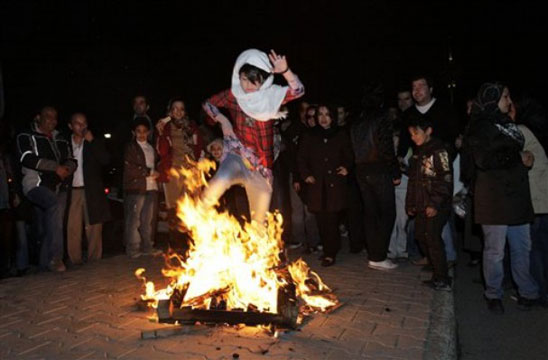 Cleric Mohammad Saeedi, the so-called Friday Prayer Leader in the city of Qum, was quoted by a state-run news agency as saying: “Chaharshanbeh Souri (Fire Festival) is considered as another bad and improper tradition.”

The Iranian regime has been attempting to outlaw the nation’s ancient fire festival because it represents ‘negative cultural behavior’ that poses a threat to the ruling dictatorship.

The population has traditionally used the event on the last Tuesday of the Iranian year to air their grievances against leaders of the clerical regime.

In recent years, security forces have been cracking down on celebration up to two months before it begins by banning firecrackers, sparklers, rockets and even home-made grenades.

The Supreme Leader of the regime, Ali Khamenei, has issued a religious decree against the celebrations, saying that Festival of Fire “has no religious basis and is harmful and must be avoided.”

Festival of Fire is a ritual leading up to the New Year on the first day of spring on March 21. To celebrate, people light up bonfires on the last Tuesday night of the year and jump over the fires singing a popular verse hoping for the deflection of the “yellowy paleness” of last year’s ills and inviting the “red vitality” for the coming year.

The powerful symbolism of Festival of Fire injects a terrifying chill in the leaders of the clerical regime. Every year the event is coupled with chants of “death to dictator,” serves as a potent reminder that Iranians are as resolute as ever in their arduous quest for democratic change.