On Wednesday, February 17, the people of Iran staged at least ten rallies and protests in various cities, venting their anger over the regime’s failure to provide people’s essential demands. Residents of Khuzestan had the lion’s share with four protests, including preschool educators, Health Center’s drivers, retirees, and Haft-Tappeh workers.

In addition to Khuzestan, citizens staged rallies in at least nine other provinces. Pensioners and retirees of the Social Security Organization held gatherings in front of the organization’s representations in seven provinces. Haft-Tappeh workers continued their rally for the fifth consecutive day in front of the Labor Office, demanding officials announce the rules of the Dispute Resolution Council.

Khuzestan province—a group of preschool educators along with their children in Izeh county held a rally in front of the local Education Department.

#IranProtests #Khuzestan—preschool educators along with their children once again rallied in front of Izeh city's Education Department, asking officials to follow up their demands. pic.twitter.com/KY8yxacAtr

They protested officials for failing to follow up their demands after several months. During recent months, preschool educators held numerous rallies in various areas in the southwestern province of Khuzestan. They demanded the department recruits them officially.

Tehran province—a group of contract teachers from the provinces of Isfahan and Tehran staged a gathering in front of the Parliament (Majlis).

#IranProtests #Tehran—contract teachers from Isfahan and Tehran gathered in front of the Parliament, protesting the government's refusal to ensure their rights.
Despite the Parliament's passed plans, teachers have obtained nothing, displaying the plans was only a trick. pic.twitter.com/rrRfnIqtGh

They demanded the legislative apparatus pursue the implementation of approved plans and bills. Notably, in a publicity stunt, the Majlis passed several plans, ensuring teachers’ rights. However, the plans were seemingly another instrument by the government to deceive and silence teachers’ protests.

The company has recently raised retirees’ pensions. However, this increase is not appropriate with the current rate of inflation. In this respect, retirees expressed their discontent over the managing board’s performance, asking the company to adjust their pensions with the inflation rate.

Khuzestan province—Drivers of Health Center’s rented vehicles in the Shush city staged a rally in front of the Health Center.

#IranProtests #Khuzestan—in Shush city, drivers of the Health Center's hired vehicles rallied in front of this center, protesting officials' failure to pay their salaries and ensure their job security. pic.twitter.com/djDDxyXQ4A

They protested officials’ failure to pay their salaries. Drivers also expressed their despair about the lack of job security. Iran is considered the worst coronavirus-hit country in the Middle East, according to official statistics. However, the government refuses to allocate an adequate budget to the hygienic department, exacerbating the health crisis.

Chaharmahal and Bakhtiari province—manufacturers of furniture in Shahrekord city, the province’s capital, staged a gathering in front of the Provincial Governorate.

They protested officials for holding a furniture exhibition amidst the coronavirus outbreak. “Do not sacrifice people’s health for financial interests of periodic exhibitions.

Notably, as of Wednesday, February 17, more than 217,200 Iranian citizens have died of the novel coronavirus, according to the Iranian opposition People’s Mojahedin Organization of Iran (PMOI/MEK).

Only in Chaharmahal and Bakhtiari province, the virus has claimed the lives of 1745 people. Furthermore, there is harrowing news about the UK mutated strain spreading in several provinces, and dozens of people have lost their lives to this kind of Covid-19.

Tehran province—urban engineers held a rally in front of the Housing and Urban Office. They protested officials for lack of selective supervision on construction projects and the destruction of advisory companies due to the rent-seeking in the engineering system.

#IranProtests #Tehran—urban engineers rallied in front of the Housing and Urban Office, protesting the government's policies that had destroyed advisory companies.
They mentioned that officials are responsible for supporting this sector and financial activities. pic.twitter.com/5IVCTtech3

“Syndrome of fluctuating rules in the engineering system has destroyed advisory companies” and “Officials are responsible for supporting the private sector and financial activities,” protesters had written on banners.

They demanded officials increase their pensions in accordance with the poverty line, implement the rule for balancing wages, resolve problems about insurance, and pay regular bonuses on the occasion of Nowruz—new Persian year.

They also insisted on classifying their job experiences as hard and harmful works, asking the organization to consider this element in balancing pensions.

#IranProtests#RazaviKhorasan—retirees in #Mashhad rallied in front of the Social Security Organization's representation. One of the retirees expressed protesters' demands once again. pic.twitter.com/pKg98CgSVA

In Ahvaz city, protesters rallied in front of the Provincial Governorate, venting their anger over the regime’s failure to meet retirees’ demands. “We would never stop [protesting] until we obtain our rights” and “Retirees will die but will never accept discrimination,” chanted protesters.

In Mashhad city, retirees gathered in front of the organization’s representation in Razavi Khorasan province. One of the protesters listed pensioners’ demands once again.

Qazvin province—residents of Andisheh town, in 5km of Qazvin city, held a rally, protesting judiciary agents’ claims about their ownership. This town includes 1,000 plots of land, belonging to the Ta’avoni Maskan [Housing Cooperative] of the State Security Forces (SSF). However, judiciary agents say that the ownership of these lands has legal problems.

#IranProtests#Qazvin—residents of Andisheh town rallied, protesting administrative and executive agencies for creating problems about their properties' ownership.
We have purchased these lands 25 years ago… They do not clearly answer when we referred to the judiciary—Protester pic.twitter.com/ibOTleGf0O

“I and many other residents had purchased these lands 25 years ago. These lands have ownership documents. However, the administrative and executive organizations have created some problems, and we are not aware of them. We received no clear response when we referred to the judiciary,” said a resident.

Markazi province—a group of Arak city-based HEPCO factory staged a gathering at the Arak’s railroad, showing their discontent about the officials’ refusal to resolve the company’s economic dilemmas.

#IranProtests#Markazi—HEPCO workers once again rallied at the Arak railroad, showing their despair over the regime's refusal to settle the company's debts and resume its activities.
The regime rejects aiding the factory while Khamenei falsely beats drums for domestic production. pic.twitter.com/Z8O1b3qF3q

During recent months, HEPCO workers rallied several times at the factory’s facility, in front of the Markazi Governorate and the Parliament (Majlis). They demanded the government settle the factory’s debt and aid it to resume its production cycle.

However, the government practically rejected workers’ appeals despite the deceitful remarks of the Supreme Leader Ali Khamenei, beating the drums for supporting domestic production.

Khuzestan province—a group of Haft-Tappeh workers rallied in front of the Labor Office, demanding officials announce the rules of the Dispute Resolution Council. Following the government’s suggestion to workers about pursuing their grievances through legal paths, workers referred the Haft-Tappeh Sugarcane Complex’s case to the council.

In this context, workers rallied in front of the Labor Office to realize the council rules. However, the government and administrative officials refuse to acknowledge the rules.

#IranProtests#Khuzestan—Haft-Tappeh workers rallied in front of Shush's Labor Office, asking officials to declare Dispute Resolution Council's rule.
"Eight of nine persons voted in favor of us. But officials reject announcing the rule. They don't respect their own law"—Worker pic.twitter.com/vNx0P5Zhyr

“We have realized that in the Dispute Resolution Council, eight of nine persons have voted in favor of laborers. However, the officials refuse to announce the result. They turn our little demands into security issues,” said a worker.

“Now, [Shush] Governor Adnan Ghazi, Provincial Governor Qassem Soleimani Dashtaki, Intelligence Department, and even Interior Minister [Abdolreza Rahmani Fazli] are involved in the issue for announcing a simple vote. They tell us to pursue the legal path, but they do not respect their own law,” the worker ended. 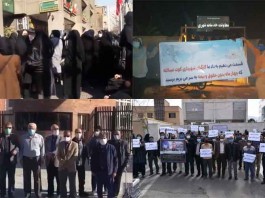 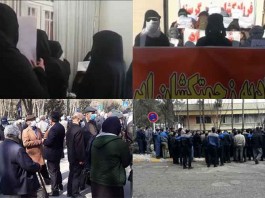 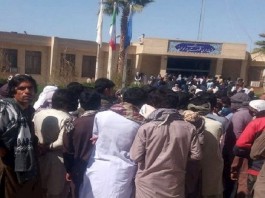