NCRI - The United Nations must hold the government of Iraq responsible for the blockade of vital supplies into Camp Liberty, and protect the residents until they can be moved to safety, former UN Secretary General Special Representative for Iraq has demanded. 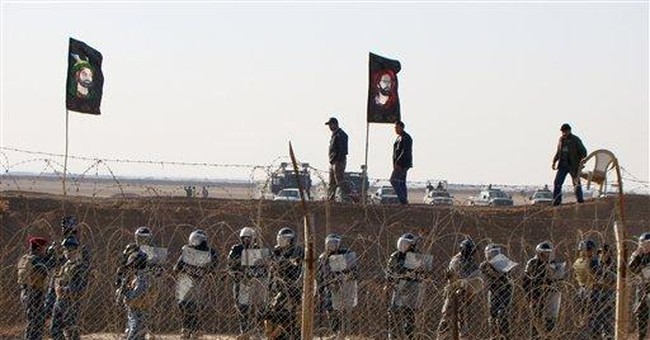 Town hall - The worldwide struggle for freedom and democracy faces enormous challenges today. Despite the promise of the United States government to support that struggle wherever it can, the Obama administration is not standing tall on the world stage. The American Legacy, as a shining beacon for oppressed peoples everywhere in their time of darkness, is being abandoned.

The United States has a enjoyed wonderful track record of fulfilling that commitment. Past leaders of our nation have taken seriously America’s special role in a troubled world. But the fact that the US has historically advanced freedom and democratic values makes me all the more upset when our current leaders fail to demonstrate an understanding of our exceptional role.

September 1, 2014 marks the anniversary of one of the worst examples of that failure in recent memory. It was then the consequence of an apparent decision of our government to turn its back on a group of people it had promised to help. Fifty-two people lost their lives in a massacre perpetrated by Iraqi forces under the command of Iraqi Prime Minsiter- Nouri-al Maliki and under the direction of the exceptionally anti-democratic regime in Iran. All of them died in possession of documents signifying the broken promise of protection that had been offered to them by the United States.

The Camp Ashraf Massacre targeted Iranian dissidents, members of the People’s Mojahedin Organization of Iran, the principal Iranian resistance movement who had been living in exile in Iraq since the 1980s, conducting the struggle for a democratic homeland from abroad. The victims were all ‘Protected Persons’ under the Geneva Convention. Most of them were handcuffed, identified and then executed with a bullet in the head. All of the individuals had signed an agreement with the US, guaranteeing their safety and protection until their final disposition.

Having recently met with leaders of that organization, along with Ambassador John Bolton, General James Conway and others, I can say with certainty that that is a struggle they still believe the United States can help them to realize.

Conversely, many of them are less certain of the commitment of America, for they have lost friends and family who could have been saved if the US had kept its promise. Since then, 3,000 other members of the Iranian resistance have remained in grave danger, languishing in Camp Liberty, Iraq under conditions like those of a concentration camp.

Since the end of the US engagement in Iraq, Iran has steadily exerted more and more influence on the government in Baghdad, as well as the Shiite terrorists roving the country. With that Iranian support, Nouri al-Maliki amplified the sectarian conflict in his country, shutting minorities out of the government and ultimately setting the stage for the rise of ISIS.

And through all of this, democratically-minded Iranian dissidents have been watching the walls of the mullahs’ influence closing around them, waiting for their long-promised relocation to the United States or some other peaceful nation. That promise has simply been broken, just as the promise to them was broken when they were given Protected Persons Status by the State Department, but then abandoned to the whims of the Maliki regime.

In spite of all of this, the PMOI as a whole has not given up on the United States as a potential source of support in their quest to end the Islamic theocracy and provide Iran with the liberty that the West has enjoyed without interruption for so much of modern history. All freedom-loving Americans should urge our government to pursue a comprehensive Middle East policy that serves our national ideals and security.

Such a policy would involve, first and foremost, willingness to confront the most oppressive regimes about their violations of human rights and their crackdowns on political dissent. Conversely, that policy ought to provide the support that we have sometimes mistakenly withheld from organized forces for democratic change both inside and outside of those countries.

As one such group, the PMOI has been rightly waiting for our support and assistance since the time of the US engagement in Iraq. But that wait grew unacceptably desperate one year ago with the needless sacrifice of 52 of their members. The one-year anniversary of the Camp Ashraf Massacre is a good reminder of what the true purpose of American leadership around the world should be.

The US should guarantee the safety and security of these defenseless Iranians. It should demand the new Iraqi government prevent and stop any aggression against camp Liberty; stop daily restrictions against the residents on medical services, medicine, fuel and logistics. Rather, Baghdad should recognize the rights of the residents for freedom of movement and should declare its readiness to allow independent investigations by the United Nations on the massacre of September 1, 2013, and cooperate with the UN Human Rights mechanisms in this respect and hand over individuals who have committed above-mentioned crimes to meet justice.

While the steps to protect Christians, Jews, Yazidis, and Kurds in the face of growing threat of ISIS were right and commendable, one has to remember that when it comes to refugees at Camp Liberty, the US not only has a moral obligation, it has legal and contractual commitments to them.

As a former ambassador to the U.N. Human Rights Commission, I urge President Obama and his congressional colleagues to mark the anniversary as a turning point, whereby we commit to making good on our promise to the freedom fighters of Camp Ashraf (now in Camp Liberty). We can no longer turn a blind eye to the government ordered killings and violations of human rights.

With the sorts of challenges that the worldwide struggle for freedom faces today, neither the West nor the Middle East can afford to wait for the second anniversary.

Iran:Call on the United States for urgent action to end the criminal siege on Camp Liberty