The Statement calls for a halt to executions in Iran, immediate release of seven Ashraf hostages, and protection of Camp Liberty

On January 19th, it was announced that 14,000 French mayors and representatives have expressed their support for the Iranian Resistance.

The statement by mayors noted that there has been a steep rise in human rights violations in Iran since the election of ‘moderate’ president Hassan Rouhani last year. It said Iran’s warmongering and secret nuclear program were both matters of ‘major concern’ for France.

They condemned the attack on Camp Ashraf by Iraqi forces at the behest of the Iranian regime, and described inaction and silence over this crime by the West as paving the way for further atrocities.

The mayors called on the French government, the E.U. and the UN to adopt immediate measures to stop arbitrary executions in Iran, secure the release of seven Ashraf hostages, conduct an inquiry into the Ashraf massacre and provide protection for 3,000 members of the Iranian opposition in Camp Liberty.

At the conference, Mrs. Rajavi urged the West not to be weak in the nuclear negotiations and in the implementation of the Geneva agreement, but instead to force Tehran’s mullahs to permanently shut down all their nuclear sites. 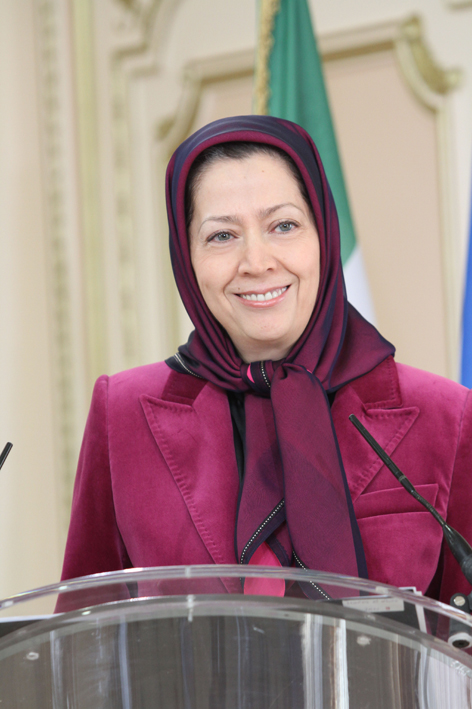 She denounced the West’s tolerance regarding the unprecedented crackdown by the “moderate” government of Rouhani, stating: “The West should not ignore freedom, human rights, and the Iranian Resistance under the pretext of nuclear negotiations.”

Mrs. Rajavi described the massacre of Ashraf residents and repeated missile attacks on Camp Liberty in Iraq as vivid indication of the fear the regime has regarding the bond between the organized resistance and the popular protests. She called upon the UN, U.S. and France for firmness in resolving the humanitarian crisis in Camp Liberty. “France has the ability to take this matter to the Security Council”, she added and “can also demand that residents of Camp Liberty be placed under international protection until their transfer and an independent inquiry to be conducted into the massacre in Ashraf.”