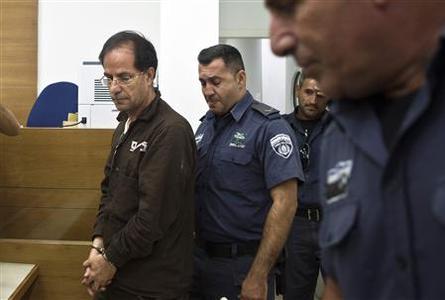 Call for expulsion of mullahs’ Intelligence and Qods agents from Europe and U.S. and disclosure of their actions
NCRI - October 13, 2013 - The arrest of a suspected Iranian spy and Qods Force terrorist in Tel Aviv airport has once again exposed the covert activities of the regime's agents operating outside Iran.

Ali Mansouri was arrested at on September 11 in possession of photographs of the US Embassy, French news agency AFP reported.

Belgium's Le Soir newspaper then reported on October 1 that the suspect 'had identified himself as a PMOI supporter ... and an agent dispatched to Belgium to the infiltrate PMOI'.

The Israeli media said it was Mansouri's third visit to their country for the purposes of spying and carrying out missions for the Qods Force. He was travelling on a Belgian passport under the name of Alex Mans and planned to pave the way for future trips by registering a company in Israel, they reported.

After each trip to Israel, Mansouri went to Tehran to submit his report. His liaisons with the terrorist Qods Force were Hamed Abdollahi and Majid Alawi. Additionally, Haj Mostafa, Haj Hamid Nemati, and Mehdi Khanbabaei from Ministry of Intelligence (MOIS) have met with him in Iran.

Hamed Abdollahi, together with Abdolreza Shahlaei, and Ali Gholam Shakouri are Brigadier Generals of the Qods Force involved who were active in the plot to assassinate the Saudi Ambassador to Washington on October 2011.

Majid Alawi is a senior official of the Ministry of Intelligence who went to Thailand on January 19, 2012, using the pseudonym of Hossein Tehrani and then, following several explosions on February 14 in Bangkok, seven people were arrested, four being Iranian agents of the Qods Force and Intelligence. For eight years, Majid Alawi was a covert MOIS agent in Sudan and Saudi Arabia and once his identity was exposed in Sudan, he returned to Tehran and became Director General of Arab States in the MOIS. He has connections with Lebanese Hezbollah and Palestine’s Islamic Jihad. After removing the Minister of Intelligence Mohsen Ejehi, regime’s former president Ahmadinejad then introduced Majid Alawi as the alter ego to the Minister of Intelligence.

Since 1980, Ali Mansouri was a merchant in Turkey and expressed sympathy for the PMOI. He was present in Istanbul at the time of four terrorist operations by the regime against the PMOI: The abduction of Abolhassan Mojtahedzadeh (December 1988); the assassination attempt on PMOI member Hossein Abedini (March 1990); the abduction, torture and killing of PMOI member Akbar Ghorbani (June 1992); and the assassination of PMOI members Zahra Rajabi and Ali Moradi (March 1996).

In July 2005, without prior invitation, he participated in the celebration of the anniversary of Mrs Rajavi’s liberation and under the pretext of handing a letter to Mrs Rajavi, attempted to get close to her but failed as he was stopped by her security.

This agent used the tactic of offering contributions to infiltrate the network of supporters of the resistance. Once he learned that this tactic was ineffective, he asked to have his contributions returned to him, including a claim that he had given loans to the PMOI after the assassination attempt on Mr Abedini. However, there were no such loans, only expenses incurred for Mr. Abedini’s medical treatment after the assassination attempt. Nonetheless, the PMOI returned the whole amount claimed by him (the receipts are available).

The NCRI Security and Anti-terrorism Commission learned in 2007 that although this individual has Belgian nationality, he covertly travels to Iran under the pretext of visiting his brother. Hence, it advised PMOI supporters to disassociate with him.

The Qods Force and MOIS register phony trade companies and through these companies transfer exorbitant amounts of money to pay the expenses of espionage, agents and terrorist plots. These companies are usually registered by Iranians who have lived abroad for a long time and appear to be opposed to the regime, have a history of supporting the PMOI, and have been involved in the trade business. One of the main agents of the Qods Force in the assassination plot of the Saudi Ambassador in Washington was such an Iranian with US nationality who was supposedly in the business of selling cars.

In the report of a joint probe by the Pentagon and the US Congress into the MOIS published in December 2012, it is noted: "The Iranian government considers Mojahedin-e-Khalq (PMOI/MEK) to be the organization that most threatens the Islamic Republic of Iran. One of the main responsibilities of the Ministry of Intelligence and Security is to conduct covert operations against Mojahedin-e-Khalq and to identify and eliminate its members.”

The report elaborates on one example and writes: "In 1996, Masoud Khodabandeh decided to leave the organization. Later, he married Anne Singleton. Soon after their marriage, the MOIS forced them to cooperate by threatening to confiscate Khodabandeh’s mother’s extensive property in Tehran. Singleton and Khodabandeh then agreed to work for the MOIS and spy on the MEK. In 2002, Singleton met in Tehran with MOIS agents who were interested in her background. In 2004, Singleton finally met her brother-in-law, Ibrahim, who was sent from Syria to Iran after the Syrians arrested him. Eventually, the MOIS forced him to cooperate as well."

Anti-espionage institutions in many European countries such as Germany, Netherlands, Sweden, etc., in their annual reports stipulate that the most important task of the MOIS abroad are activities against the PMOI and NCRI, including to demonize them and to collect information on them. These reports underscore that the MOIS conducts these missions through employing former members of these groups. The Netherlands’ intelligence service, in its last annual report of 2012, says: "The Iranian government is still fully active in its fight against the opposition movement Mujahedin-e-Khalq (MKO). It has emerged that the Iranian intelligence service is directing a European network that is also active in the Netherlands. This network consists of former MKO members who have been recruited by the Iranian intelligence service. They have been tasked with negatively influencing the public opinion of the MKO by means of lobbying, publications and anti-MKO meetings. They also gather information on the MKO and its members or suspected members for the Iranian intelligence service."

Berlin’s federal court, in a decree in May 1997 regarding the assassination of leaders of Iran’s Kurdish Democratic Party in September 1992 in a Mykonos restaurant, underlined that the decision for the assassination was taken by a committee composed of the Supreme Leader, the President, the Foreign Minister and the Minister of Intelligence. Subsequently, in its 29 April, 1997 meeting, the EU Council decided to concentrate on the expulsion of Iranian regime’s intelligence agents from EU member states. Nevertheless, European countries decided to violate this decision and to continue their conciliatory relations with the regime.

The NCRI Security and Anti-terrorism Commission considers the following steps as imperative to prevent mullahs’ Gestapo and regime’s terrorist foreign force from continuing and expanding their espionage and terrorist plots:

a) The arrest, trial, punishment and expulsion of spies and agents of MOIS and Qods Force

b) Disclose and publish the activities of agents of the MOIS and the terrorist Gods Force in Western countries, especially their activities against the PMOI and NCRI, by pertinent organs and institutions in these countries

c) Obstruct the misuse by agents of the religious fascism ruling Iran of the refugee status and receiving nationality through UNHCR and refugee institutions in various countries.

The Security and Anti-terrorism Commission

of The National Council of Resistance of Iran