After a meeting that featured the head of the Iranian Resistance, the senators called on the French government to adopt and “effective and serious policy” regarding Iran and to act to protect members of the Iranian opposition at Camp Liberty in Iraq from more massacres such as those that killed scores and wounded hundreds over the past two-plus years.

In a statement read by Senator Jean-Pierre Michel, the senators also called for an “independent, 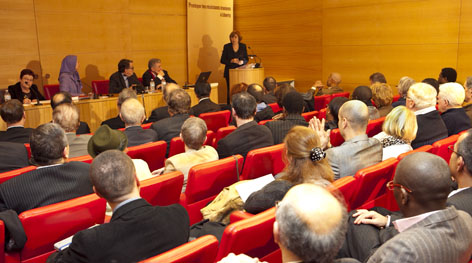 comprehensive and transparent probe by international experts” into the September 1 raid on the Iranian refugees in Camp Ashraf at the upcoming conference of the Human Rights Council in March.

Mrs. Maryam Rajavi, the president-elect of the National Council of Resistance of Iran (NCRI), told the meeting, which included prominent present and former parliamentarians and a past member of the US National Security Council, that the mullahs’ regime’s extensive interference in Syria is the principal problem of that country. “Evicting the Iranian regime from Syria is the only solution for ending the rule of the murderous tyranny in that country,” she stated.

Mrs. Rajavi also discussed implementation of the interim nuclear agreement between the P5+1 and the Iranian regime, asserting that the indecisive approach by the U.S. and the West led the mullahs, “pressured by popular discontent and internal crises,” to retreat one step. She said that the nuclear program would have been dismantled by now if the West had been more decisive she added: “But there’s still time. Western governments must compel the regime to accept and fully implement the additional protocol and agree to snap inspections. They must compel the mullahs to shut down their nuclear sites completely and comply with the Security Council resolutions,” she added. 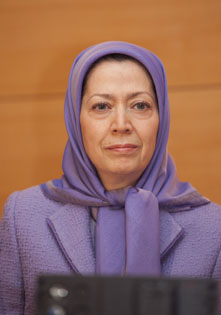 She also described the West’s policy toward the resistance movement as “flawed” and she pointed to the repeated disclosures and warnings by the Resistance about “the threat of the mullahs’ regime” to the region through it spreading of fundamentalism. “Regrettably, with their erroneous policies, Western governments ignored those warnings,” she said.

The French senators endorsed her call for the French government to take the case of the Iranian dissidents in Iraq to the UN Security Council to ensure the protection of the residents of Liberty until their transfer out of Iraq, and to use its influence to secure the release of the seven Ashraf hostages who are being detained by the Iraqi government, to arrange the immediate transfer of asylum-seekers in Camp Liberty to third countries, and to assure their security until that time.