The international conference took place in Paris on Saturday in advance of the International Women’s Day in March 8.

A wide range of participants reiterated the need to support the Iranian Resistance against the religious dictatorship that rules Iran. According to the participants, preventing Tehran from supporting Islamic fundamentalists is necessary to guarantee the rights of women in Islamic countries.

Women with traditional and local attires as well as Western-oriented clothes filled the huge meeting hall.

Iranian opposition leader Maryam Rajavi was the keynote speaker of the event. Her speech summarized the decades-long experience of the Iranian Resistance in standing up to theocratic rule in Iran and its misogynist character. Her speech received a thunderous reaction from the audience. Dozens of Iranian women’s associations in exile from all over Europe, the U.S., and Canada had dispatched their delegates to the unique conference.

The speakers pointed out various aspects of Tehran’s systematic and institutionalized crackdown on women’s rights and reiterated that Hassan Rouhani is part of the establishment—and his only mandate is to maintain the clerical rule that has enslaved Iran. The women activists stressed that it is foolhardy to call Rouhani a moderate, and that he has sinister political objectives that will simply embolden Tehran in its ominous agenda.

The participants took a very critical attitude toward Western attitudes regarding Tehran in general and specifically toward the Rouhani administration. They described the Western attitude as “appeasement” that only plays in the hands of Tehran and its proxies in Islamic countries, to the detriment of moderate Muslims in general and women in particular. 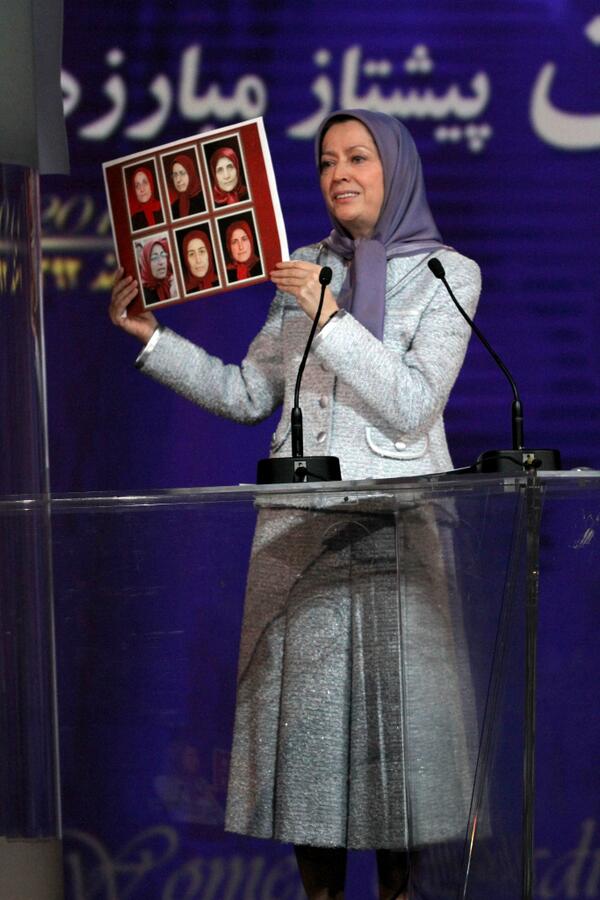 Ritta Sussmuth, the former President of the German Bundestag; Michele Alliot-Marie, who held such key positions as foreign and defense minister in France in several administrations; Linda Chavez, the former White House Director of Public Liaison; Ms. Kim Campbell, the former Prime Minster of Canada; and Ingrid Betancourt, the former Colombian presidential candidate who was held hostage for years, were among the speakers. They were joined by women politicians from old and new Europe.

Women activists from Syria, Palestine, Tunisia, Egypt, Jordan, India, Canada, and Australia also provided a wide range of perspectives on issues that women are grappling with in their societies.

In her remarks, Mrs. Rajavi said that the mullahs’ regime will crumble if they put aside misogyny and the export of fundamentalism from their policies. That is why neither mullah Mohammad Khatami, Iran’s president in the late 1990s and early in this century, nor Rouhani, who had attempted to show signs of moderation and reform, made no moves to alleviate the suppression of and discrimination against Iranian women, since this would be tantamount to the beginning of the end of the clerical rule. She elaborated that this is why the same bills that Mahmoud Ahmadinejad, the former president, had introduced are being implemented as law by Rouhani.

Mrs. Rajavi underscored the need to defend the women of the Iranian Resistance who are among some 3,000 members of the People’s Mojahedin Organization of Iran (PMOI/MEK) in Camp Liberty, near Baghdad Airport in Iraq. The residents do not have even minimal protection and security in the face of immediate and constant threats of missile and rocket attacks by Tehran’s agents, acting with the complicity of the Government of Iraq.

Mrs. Rajavi called on all women activists to urge the US government to carry out its commitments of safety and security for all of Camp Liberty’s residents.