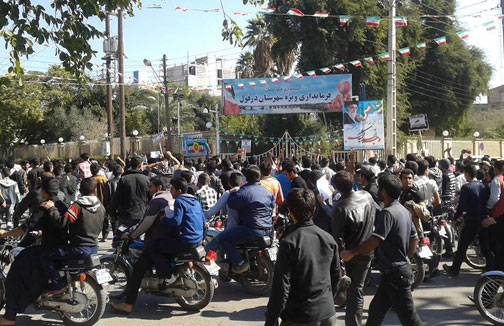 In the anti-government rallies protesters chanted slogans against senior mullahs’ regime officials including Ezzatollah Zarghami, the head of IRIB, and clashed with units of Revolutionary Guards (IRGC) and other regime’s repressive forces.

On Friday, February 14th, in the cities of Dezful, Masjed-Soleyman, Izei and Lali, while the regime was holding its so-called Friday prayer sermons, protesters took to the streets and chanted “Death to Zarghami”, “Bakhtiaris will die but not accept insults” and “Don’t make us resort to guns”. 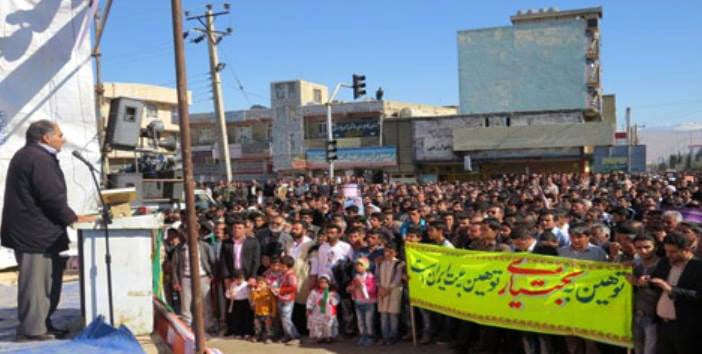 The protest in Dezful led to clashes between the youths and regime’s repressive forces in various parts of the city.

In these skirmishes the youth broke the windows of at least 30 vehicles belonging to security units. They also clashed with a unit of ‘NOPO’ (special forces dedicated to Khamenei) who had placed barriers and attacked the demonstrators.

In these clashes the youths were able to destroy or remove the barriers.

Residents of Dezful were attacked by the regime’s repressive police but they resisted by throwing rocks in self-defense. A senior police commander was injured and forced to flee the scene, according to some reports.

In addition to the police and special units, intelligence elements and plainclothes agents also used batons and tear gas to attack the demonstrators.

Mrs. Maryam Rajavi, President-elect of the Iranian Resistance, hailed the uprising and brave Bakhtiari community, and called on all Iranians – especially the courageous youth – to rise in different parts of the country in support of their fellow countrymen. Iran’s Bakhtiari community has always played an important and decisive role in the struggle against colonialists and dictatorships in Iran, especially since Iran’s Constitutional Revolution in 1907, and insulting them means insulting all Iranians, she added. The mullahs’ regime is the enemy of Iranians from all walks of life, and its overthrow is a nationwide demand.