The meeting at the French National Assembly was organized by the parliamentary Committee for a Democratic Iran,” comprised of parliamentarians from various political groups who addressed the meeting.

Bruno Leroux, head of the socialist group (the ruling party) at the French Parliament said: “I share common values with you…You are free to pursue your resistance as you deem adequate.” 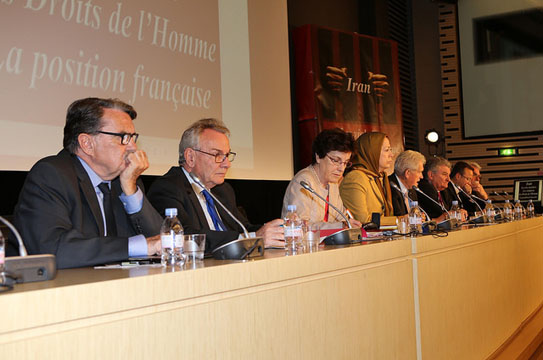 Rajavi made reference to the savage attack perpetrated by the regime’s suppressive forces against the ward of political prisoners in Evin Prison on April 17. She criticized Western governments for overlooking this crime and called upon the UN to investigate both this attack and the steep rise in the number of executions in Iran under the presidency of Hassan Rouhani.

On the issue of Iran’s clandestine nuclear program, Rajavi reiterated that the regime should be pressed to accept NPT’s additional protocol and to completely halt its enrichment and missile programs.

The French parliamentarians said the notion of Rouhai’s moderation is a myth and stressed that the silence by the West on the regime’s savagery emboldens the regime to repeat its crimes. They agreed that Rouhani is a representative of the Iranian establishment and has been pursuing Ayatollah Khamenei’s policies.

Speakers reiterated the imperative of fostering freedom and democracy in Iran by supporting the organized resistance and the 10 point plan of Maryam Rajavi.

Rajavi urged the United States and the UN to launch an independent investigation into massacres that have taken place against Iranian dissidents in Iraq. This, she said, would provide the surest guarantee of preventing further crimes against the Liberty residents.

“We urge the speedy relocation of the residents of Liberty – especially the sick and the wounded – to Europe and America,” Rajavi said.