On Wednesday 9 April, a high level conference on Iran was held in the European Parliament. The meeting moderated by Struan Stevenson, chair of the Friends of a Free Iran intergroup, included speeches by Maryam Rajavi, President-elect of the Iranian Resistance; Michèle Alliot-Marie, former French Minister of Defense and Foreign Affairs; Tahar Boumedra, the former UNAMI Chief of Human Rights and the person in charge of the Camp Ashraf dossier (2009-2012), plus many senior members of the European Parliament from various political groups including Alejo Vidal-Quadras , Vice-President of the European Parliament, Stephen Hughes, First Vice-President of the Socialists-Democrats group, Vytautas Landsbergis former President of Lithuania, Eduard Kukan former Foreign Minister of Slovakia, EP Quaestor Jim Higgins from Ireland, Tunne Kelam from Estonia, Oreste Rossi from Italy, Derk Jan Eppink from the Netherlands as well as Chairman of Belgian Senate’s Equal Rights Committee Nele Lijnen and Belgian MP Els Demol.

Mrs. Rajavi, the keynote speaker to the conference, noted that mullahs’ hysteric attacks of the past week against the European parliament because of its resolution against the violations of human rights in Iran demonstrates that human rights is indeed the Achilles heel of this regime and that the chalice of poison of human rights is a hundred times more dangerous for this regime as the nuclear one. Thus, all factions of this regime are united and have common interest in execution, torture and slaughter. Ten months after Mullah Rouhani assumed office, the unprecedented number of executions and the barbaric massacre against Ashraf and Camp Liberty proved that this regime lacks even the least capacity for flexibility and moderation. The solution for Iran problem is a change of the regime. 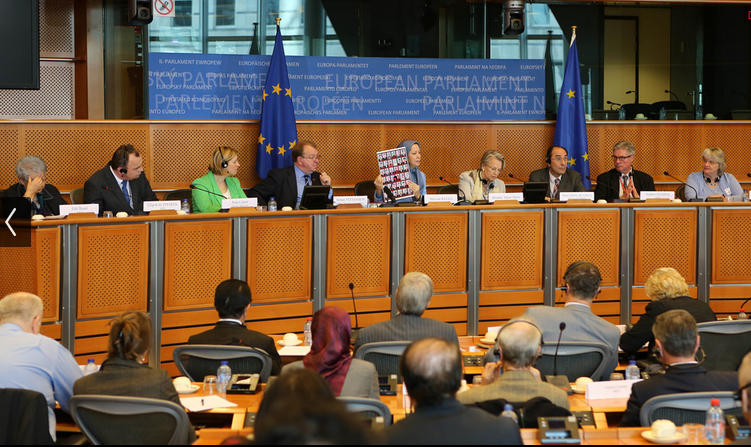 The speakers raised the following points:

1. The Iranian regime has retreated one small step from its nuclear programme because of international sanctions but has not given up its ambitions to attain a nuclear bomb. Many speakers demanded that Iran must implement fully the Security Council resolutions, stop all enrichment and accept the additional protocol.

2. The 10-month record of President Rouhani leaves no hope of moderation and reform within the ruling theocracy. After the undemocratic presidential elections many parliamentarians have realised

that he is no moderate since the human rights situation has become worse and the regime’s meddling in the region, especially in Syria and Iraq has increased.

According to the UN Secretary-General’s report, as well as some Western governments and human rights organisations, the promises for freedom of expression and respect for human rights have failed with over 700 executions since Rouhani’s election. Only a firm policy towards the regime can help the Iranian people who are suffering from oppression.

3. In parallel to the repression inside the country, the regime is trying to destroy its organised opposition in a virtual prison called Camp Liberty in neighbouring Iraq, with assistance from its puppet government there. The mass executions of 52 defenceless PMOI members in Ashraf on 1 September 2013 and the repeated missile attacks on Camp Liberty, intensifying the disgraceful medical siege there, and repeated threats of extraditing these refugees, together with the silence and lack of action by the United States, the United Nations, and the European Union, have all created a terrifying situation for these refugees who are acknowledged by the UNHCR to be under international protection. Twenty six months after the transfer of these people from Ashraf to the squalid and prison-like conditions of Camp Liberty on the pretext of their transfer to third countries, only 10% have been transferred out of Iraq, thanks to the endeavours of the Iranian Resistance.

4. The US, UN, and the EU have failed to protect these refugees piling pressure on Nouri al-Maliki to kill or hand over the 3000 Iranian dissidents in Camp Liberty. Since the Americans reneged on their pledge to guarantee the safety of these defenceless refugees, they have been harassed, psychologically tortured, deprived of food, medicines and basic necessities, bombed, shot, handcuffed and executed.

The false and biased reports by the United Nations on the Camp Liberty residents are unacceptable. Our experience of the past years, especially during the period that Martin Kobler was head of the UNAMI, indicates that these reports are not the result of misinformed authors or mistakes; rather, they stem from a political intent with no objective other than to serve the objectives of the fascist regime in Iran and its subordinate government in Iraq.

5. The conference demanded the implementation of the legitimate, minimum and urgent demands of Camp Liberty’s residents, including:

• The swift release of the seven residents, six of whom are women, taken hostage on September 1 in Ashraf;

• The expeditious transfer of all residents to Europe and the United States;

• Providing the minimum protective provisions at Camp Liberty such as the return of 17,500 T-walls, the transfer of protective helmets and vests and medical equipment of residents from Ashraf, enlarging the area of the camp and allowing construction of buildings for the sick, disabled and injured;

• The permanent stationing of UN observers, along with a Blue Helmet team, in Camp Liberty;

• Immediately ending the siege on the camp, especially the disgraceful medical blockade;

• The conducting of an independent inquiry into the massacre of September 1 by the United Nations and the referral of the file to the International Criminal Court. 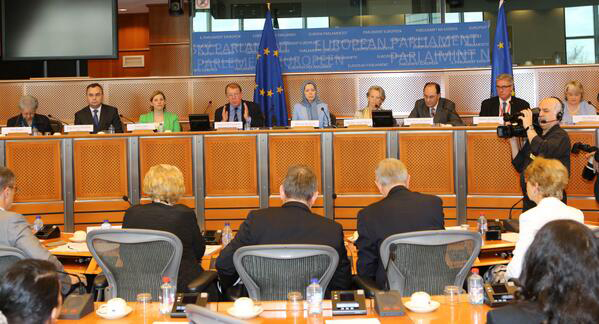 6. The only viable and realistic solution for the future of Iran is a change of regime and the establishment of real democracy. Maryam Rajavi and her movement have the competence to establish such a democracy. Her 10-point plan is a democratic platform that can resolve the problems of Iranian society after almost one century of dictatorships of the Shah and the mullahs. The Iranian resistance has managed to make major progress in the past 35 years, despite facing a brutal dictatorship and an appeasement policy of the west.

7. On 3rd April the European Parliament adopted a moderately critical resolution on Iran causing a hysterical and unprecedented hostile reaction from the mullah’s regime. Many Iranian government officials, including the so called “moderate” Foreign Minister, the Speaker of the Majlis (the Iranian Parliament), the chair of the Iranian Parliament’s Security and Intelligence committee, Tehran’s Friday Prayer Leader, numerous members of the Majlis and the overwhelming majority of the media, have mounted relentless attacks on the EU, questioning why the European Parliament has dared to include human rights violations and the anti-democratic behaviour of the regime of Iran in the on-going nuclear discussions.

The hostile reaction is a clear indication that the survival of the Iranian regime is very much dependent on the continuing systematic and grave violation of human rights and that any relaxation of such oppressive activities would accelerate the regime’s overthrow. Indeed the universal condemnation of the EU resolution has demonstrated clearly that all factions within Iran, including the so called ‘moderate’, ‘extremist’, ‘pragmatic’, or ‘centrist’ political blocs, are all colluding in the repression and violation of the Iranian people’s human rights and are completely subservient to the Supreme Leader.

8. Appointing a terrorist as the Iranian regime’s newly named ambassador to the United Nations shows the real nature of Rouhani. Hamid Abutalebi was involved in the hostage-taking at the United States Embassy in Tehran in 1979 and coordinated the assassination of Mohammad-Hossein Naghdi, the representative of the National Council of Resistance of Iran (NCRI) in Italy, on 16 March 1993.

The conference called for a firm stance against the policies of the Iranian regime; its nuclear programme, its violation of human rights, its warmongering and export of terrorism in the region. It strongly urged the European Union to make conditional the expansion of its political and economic relations with Iran on the ending of executions and a dramatic improvement of human rights.

Chair, Friends of a Free Iran

Friends of a Free Iran is an informal group in the European Parliament (FOFI), formed in 2003 and enjoys the active support of many MEPs from various political groups