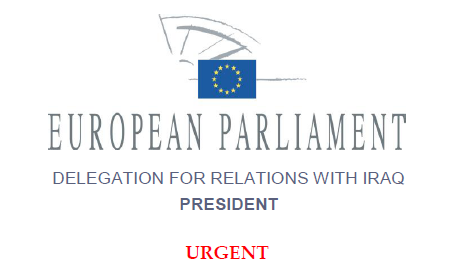 I have received strong and verifiable intelligence this morning that a US delegation has met with the 7 Ashraf hostages in a compound near Baghdad Airport, on at least three occasions and that the US government is therefore fully aware of the fact that they are being held by the Iraqi authorities prior to their deportation to Iran.

As you know, these hostages, six of whom are women, were abducted violently during the horrific massacre that took place in Camp Ashraf on 1st September when 52 of their colleagues were executed, many with their hands manacled behind their backs. The repeated denials by Nouri Al-Maliki and his government of any involvement in this horrendous crime are now plainly exposed by the revelation that the hostages are in government custody near Baghdad Airport.

If these asylum-seekers are now forcibly returned to Iran, against their will, to face certain torture and execution, the US will share responsibility for their fate. I urge you once again to intervene without delay to force the Iraqis to release these hostages and return them to Camp Liberty.

STRUAN STEVENSON, MEP President of the European Parliament’s Delegation for Relations with Iraq