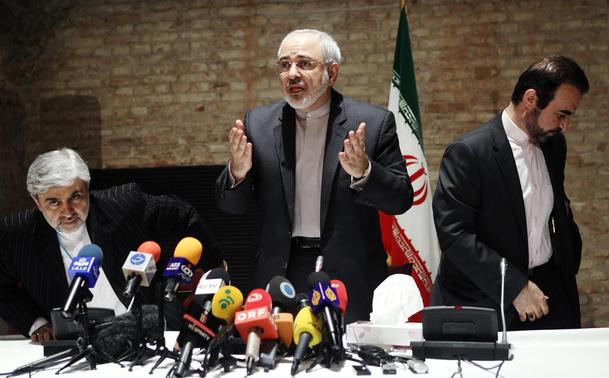 INU - The Associated Press claims that both sides in the Iran nuclear talks have vaguely discussed the possibility of a second extension, beyond the current November 24 deadline. Certainly, Iranian officials including Deputy Foreign Minister Abbas Araqchi have floated this possibility in recent days. But the notion that this has been matched on the US side is disputed by the AFP, which on Wednesday quoted a high-ranking US official as saying that they are specifically not seeking an extension.

Nevertheless, Iranian calls for an extension seem to be supported by Hassan Rouhani’s recent statement that regardless of whether an extension is needed, a final agreement is “certain.” Such statements seem to ignore the threat of Khamenei’s red lines and the hard-sell of a successful agreement. If Rouhani is not ignoring these factors, it would surely indicate that he is betting on the US giving into high Iranian demands and signing what most Western policymakers would agree is a “bad deal.”

However, an editorial by Tyler Cullis at CNN contradicts this, claiming that potential investors in Iran have been advised to wait and see whether the deal goes through before deciding whether or not to bet on Iran as a future source of revenue. However, Cullis provides no concrete evidence to match the implications of the “Europe-Iran Forum” that took place on Wednesday in London.

Cullis’ interpretation is further disputed by The Tower, which says that conference is only the latest example that the sanction regime is eroding. Other examples include gradual increases in Iranian exports of oil and other resources to the European Union, and the end of a European asset freeze on Iran’s largest oil tanker company.

Yet Cullis uses his claim to argue that the US may not be able to secure a deal because it will not be able to deliver on the promise of immediate positive effects upon the Iranian economy. He thus argues that the White House should secure greater authority over Iran sanctions, and prepare to remove them immediately and en masse upon the signing of a deal. He also advises that the US should actively encourage investment in Iran on the assumption that firms will be loath to make those investments even when there are no longer legal barriers.

But large-scale European investment is not the only determinant of whether sanctions relief has immediately noticeable effects on the Iranian economy. And the limited sanctions relief under the interim nuclear agreement has already had such effects. The release of frozen assets has given Iran small-scale opportunities to reinvest, but also the mere promise of broader sanctions relief is leading to expanded economic relations with non-European, as well as European powers.

The India Times reports that India has begun paying on past due crude oil imports from Iran, presumably because the perception of less risk in evading US payment channels to deal with the Islamic Republic. Those payment channels had been closed off under the sanctions regime, creating a situation in which India paid about 55 percent of what it owed through alternate channels, and held back the remaining 45 percent, amounting to as much as four billion dollars.

Indian refiners have already paid about 1.65 billion of these past dues, and are set to pay an additional 400 million in the next few days. Yet this is reportedly not adequate for Iran, insofar as it has demanded the payment of interest on the past dues. India has thus far refused, saying that the closure of payment channels was not India’s fault.