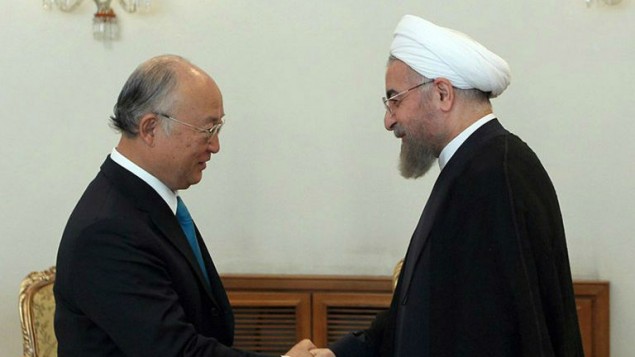 The handling of this probe has been widely criticized in the midst of the debate over the nuclear agreement between Iran and the P5+1, and especially since details were revealed of “side deals” between Iran and the IAEA which appear to give Iran the authority to conduct its own inspections of the Parchin military base, which is considered to be central to past military dimensions, including the testing of detonators that could be used in setting off a nuclear warhead.

Concerns about the limits of that probe have only grown stronger since then, especially with the announcement on Monday that Iran had apparently discovered unexpectedly high quantities of good quality yellowcake uranium, giving the Islamic Republic an opportunity to enrich home-sourced materials instead of relying on more easily monitored imports. By some accounts, Western negotiators had been counting on the presence of these imports, and newly sourced yellowcake may seriously complicate the implementation of new monitoring schemes.

An editorial published at Investors.com on Tuesday asked why Iran would even be engaged in such extensive and costly uranium exploration if it has truly abandoned its nuclear weapons ambitions. The same editorial ties the yellowcake story to another story that was raised as a red flag regarding Iran’s intentions on Tuesday.

The Investors.com editorial referred to China as Iran’s “nuclear enabler,” pointing out that it has provided Iran with ballistic missiles since the 1980s, as well as designing a uranium conversion plant, supplying nuclear materials, and acting as an intermediary between Iran and nuclear-armed North Korea. The article went on to say that there is an “obvious purpose” for this on China’s part, in that any increase in Iranian power challenges US interests and status in the Middle East.

The same motives have arguably also guided collaboration between Iran and Russia, which the editorial refers to as Iran’s “main helper” in the nuclear sphere. That collaboration has grown increasingly extensive as Russia works on completing the sale of advanced missile systems to Iran, as well as expanding economic cooperation and engaging in joint military maneuvers.

Thus, Iran’s stated desire for more collaboration with China once again raises the specter of a potential Asian bloc comprised mainly of these three countries and committed to undermining Western global interests, especially in the Middle East.

One element of this trilateral cooperation was actually raised by President Obama recently, according to the New York Times. In spite of his policy of rapprochement with Iran and his tendency to downplay the Russian threat, Obama acknowledged that Iran, Russia, and China had all become much more skilled at cyber warfare over the previous several months, and that the US had been struggling to keep up.

The Times also pointed out that many analysts expect the Iranian regime to increase funding for cyber weapons in the wake of its nuclear agreement with the West. Furthermore, the article notes that many regard the Obama administration’s response to these cyber threats as incoherent, weak, and thus as tending to embolden more of the same.

Many critics of the administration have also broadened these conclusions to describe the Obama administration’s overall policies toward Iran. The president has been criticized for a failure to take decisive action in a number of areas where Iran has a vested interest, perhaps most notably in Syria, where Obama refused to follow through on enforcing his own stated red lines, namely Bashar al-Assad’s use of chemical weapons.

According to Pakistan Today, the Iranian foreign minister used his trip to Beijing in order to call for Chinese help in formulating “political solutions” to the crises in Syria, Iraq, Yemen, and elsewhere. But there is no indication that Tehran will accept a solution that involves the removal from power of persons who are closely allied with the Islamic Republic. By extension, neither China nor Russia will do so either, especially given that Russia recently began to deploy troops to Syria to directly aid the Assad regime.

If collaboration among the three parties continues, it could thus lead to the further expansion of Iranian power in the broader Middle East, buttressed by foreign support.