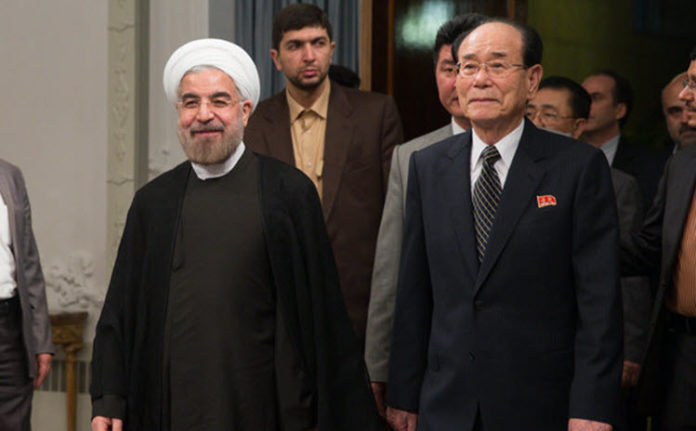 They say the while nuclear and ballistic missile ties between the two nations are longstanding and ongoing, unlike Iran, North Korea already has developed nuclear weapons. Iran is presently constrained by the nuclear deal but, by sharing its technology and through finance, Iran can contribute to the development of North Korea’s program.

Ofek and Shoham noted,“There is an irony in this, as it is thanks to its [Vienna Nuclear Deal]-spurred economic recovery that Iran is able to afford it.” They add, “This kind of strategic, military-technological collaboration is more than merely plausible. It is entirely possible, indeed likely, that such a collaboration is already underway.”  They say that North Korea is likely “ready and able to furnish a route by which Iran can clandestinely circumvent” the nuclear deal.

They point out that many of Iran’s ballistic missiles are modified North Korean models. As an example, they say that Iran’s Shahab-3 missile is a variant of North Korea’s Nodong-1. The warhead on the Shahab-3 was redesigned to carry a nuclear warhead in the mid-2000s by Kamran Daneshjoo, a top Iranian scientist.

According to Ofek and Shoham, Iran made the necessary calculations to miniaturize a nuclear warhead to match the weight and dimensional specifications of the Shahab-3, then carried out benchmark tests at the secret Parchin military site. Ofek and Shoham wrote, “More significantly, Iranian experts were present at Punggye-ri, the NK nuclear test site, when such tests were carried out in the 2000s.”

Iran financed the North Korean-built Syrian plutonium reactor that Israel destroyed in 2007. The project “was probably intended as a backup for the heavy water plutonium production reactor of Iran’s military nuclear program.”

Iran and North Korea used different technologies to produce plutonium, but both use gas centrifuges to enrich uranium, Ofek and Shoham wrote that in that technology Iran is apparently more advanced than North Korea, and that Iran’s 2012 agreement to share science and technology with North Korea was “a meaningful event” that “was probably intended to mask an evolving Iranian-NK cryptic interface.”

The head of the Atomic Energy Organization of Iran, Ali Akhbar Salehi, ratified the deal, and Iranian Supreme Leader Ayatollah Ali Khamenei said the deal was an “outcome of the fact that Iran and NK have common enemies, because the arrogant powers do not accept independent states.”

Ofek and Shoham posited that the deal was intended to “compensate technologically” for the limitations Iran under the nuclear program. Two months before its signing,  former President Barack Obama told Khamenei, “We are prepared to open a direct channel to resolve the nuclear agreement if you are prepared to do the same thing and authorize it at the highest levels and engage in a serious discussion on these issues.”

The authors noted that Iran established a “permanent” delegation of ballistic missile experts in North Korea, who “supported the successful field test of a long-range ballistic missile in December 2012. The more advanced solid-fueled motor technology, which included the NK KN-11 submarine-launched ballistic missile and the Iranian Sajjil missile (range 2,000 km), was apparently developed collaboratively by the two countries.” Satellite photographs publicized in December displayed a missile launch site in Geumchang-ri that bears a strong resemblance to the Iranian launch site in Tabriz.

Ofek and Shoham wrote that a group Iranian experts including Mohsen Fakhrizadeh-Mahabadi, who lead Iran’s nuclear weapons program, were secretly in North Korea for its 2013 nuclear test, “In 2015, information exchanges and reciprocal delegation visits reportedly took place that were aimed at the planning of nuclear warheads,” the authors noted. “These include four [North Korean] delegations that visited Iran up until June 2015, one month before the [nuclear deal] was completed.” Shortly afterwards, North Korea opened a new centrifuge facility.

Ofek and Shoham observed: “The chronology, contents, and features of the overt interface between Iran and NK mark an ongoing evolutionary process in terms of weapons technologies at the highest strategic level. The two countries have followed fairly similar nuclear and ballistic courses, with considerable, largely intended, reciprocal technological complementarity. The numerous technological common denominators that underlie the NW and ballistic missile programs of Iran and NK cannot be regarded as coincidental. Rather, they likely indicate – in conjunction with geopolitical and economic drives –a much broader degree of undisclosed interaction between Tehran and Pyongyang.”

The Trump administration is urged by the authors, to “meticulously and rigidly ascertain” that the strategic cooperation between the two rogue states is stopped.

In December, Claudia Rosetti, an investigative journalist, examined the possibility that Iran and North Korea collaborated on nuclear weapons research after the 2015 nuclear deal.  Her concerns are similar to those expressed in August by Ilan Berman in the National Interest, who wrote that for decades Iran and North Korea have forged a “formidable alliance – the centerpiece of which is cooperation on nuclear and ballistic-missile capabilities.” He wrote that reports have indicated that North Korea has actively aided Iran’s nuclear program for many years, and that North Korea sent “hundreds of nuclear experts” to work in Iran, while making “key nuclear software” available to Iranian scientists.