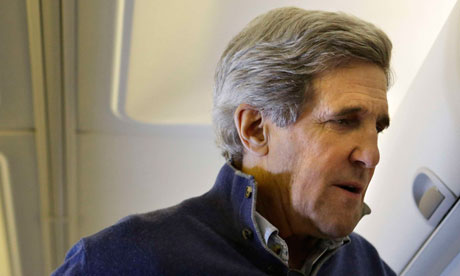 Speaking to Reuters, a Western diplomat who is involved in the talks said, “The ministers can help negotiate an extension of the negotiations, if that’s deemed useful, and they could help generate momentum to get a deal by July 20, which remains our goal.”

That latter point has been repeatedly emphasized on both sides, but the public focus on meeting the deadline has not led negotiators any closer to bridging the gaps between their opposing demands. Various analysts have been saying since even before the current round of talks that an extension might be likely. In a recent interview with the Wall Street Journal, nonproliferation expert Robert Einhorn said that it would be very surprising if the negotiating powers had not begun considering an extension by now. Secretary Kerry’s involvement may indicate that they have.

But it is also important to note that an extension is not inevitable, but depends upon the perception that it would be useful and that additional time would give negotiators the space needed to iron out persistent differences. It is not clear that all parties will agree on this point, especially if visible progress in the current talks is a prerequisite for the expectation of additional progress after an extension.

But not only do Iran and the West remain as far apart as at the start of negotiations on the topic of Iranian enrichment capacity; recent comments by the Iranian supreme leader suggest that the gap between their positions may actually be widening. Western powers have consistently insisted that Iran must reduce its current supply of 10,000 operational and 9,000 non-operational enrichment centrifuges, in order to significantly reduce its breakout period for a nuclear weapon. Iran, on the other hand, has been adamant about its plans to upgrade and expand its supply to 50,000. The supreme leader and the Iranian president have both been explicitly unwilling to negotiate on this point.

Now, in a posting on his personal website on Monday, Ayatollah Ali Khamenei says that his officials have set the actual expansion goal at 190,000 centrifuges. As Western negotiators and analysts have almost universally agreed that 50,000 centrifuges would allow Iran to very quickly be able to enrich enough fissile material to power a nuclear weapon, a final goal nearly four times that number is plainly indefensible.

Khamenei may however feel emboldened to raise his claims in light of alliances that Iran is securing against Western interests, chiefly from Russia. On Tuesday, French Foreign Minister Laurent Fabius said that Russia had increasingly departed from the approach of Western powers in negotiations, presumably meaning that it had shown even more willingness to support the Iranian position.

Khamenei’s statement went on to give an indication of the possible motives behind this expansion of his rhetoric. He appears to feel as though the Islamic Republic is winning the negotiations. “The P5+1 started bargaining with 500 [separative work units],” he said, “then 1,000 SWUs enrichment capacity. Now they want to convince us to accept 10,000 SWUs.”

Contrary to Khamenei’s claims, Western powers have never publicly accepted a 10,000 centrifuge enrichment capacity for Iran. Rather, their demands have remained in the vicinity of several hundred units. But Khamenei’s latest comments are part of a trend of falsehoods or exaggerations that have evidently been aimed at convincing Iran that Khamenei’s government is able to stand up to the world’s superpower and win concessions from the US.