Tehran has a long history of unveiling supposedly new military technology, only for photographs and technical claims to be debunked by experts. It is certainly true that Iranian missile technology has become more sophisticated in recent years, and that the clerical regime has helped to outfit terrorist groups like Hamas and the Yemeni Houthi rebels with longer-range missiles of their own. But specific Iranian claims about the destructive power of the regime’s own missiles are always up for debate, while supposedly advanced military equipment like drones and fighter aircraft are sometimes recognizably little more than propaganda mock-ups.

Even in the case of legitimate military developments, as is likely the situation with the Khoramshahr missile, their rollout in military parades like Friday’s certainly serve a propaganda role. Many of the reports on this missile premiere connect it to US President Donald Trump’s speech before the United Nations General Assembly on Tuesday, in which he reiterated his opposition to the 2015 nuclear deal while also calling attention to various instances of malign behavior by the Iranian regime, including its support for regional terrorist groups and its misappropriation of funds and sanctions relief. 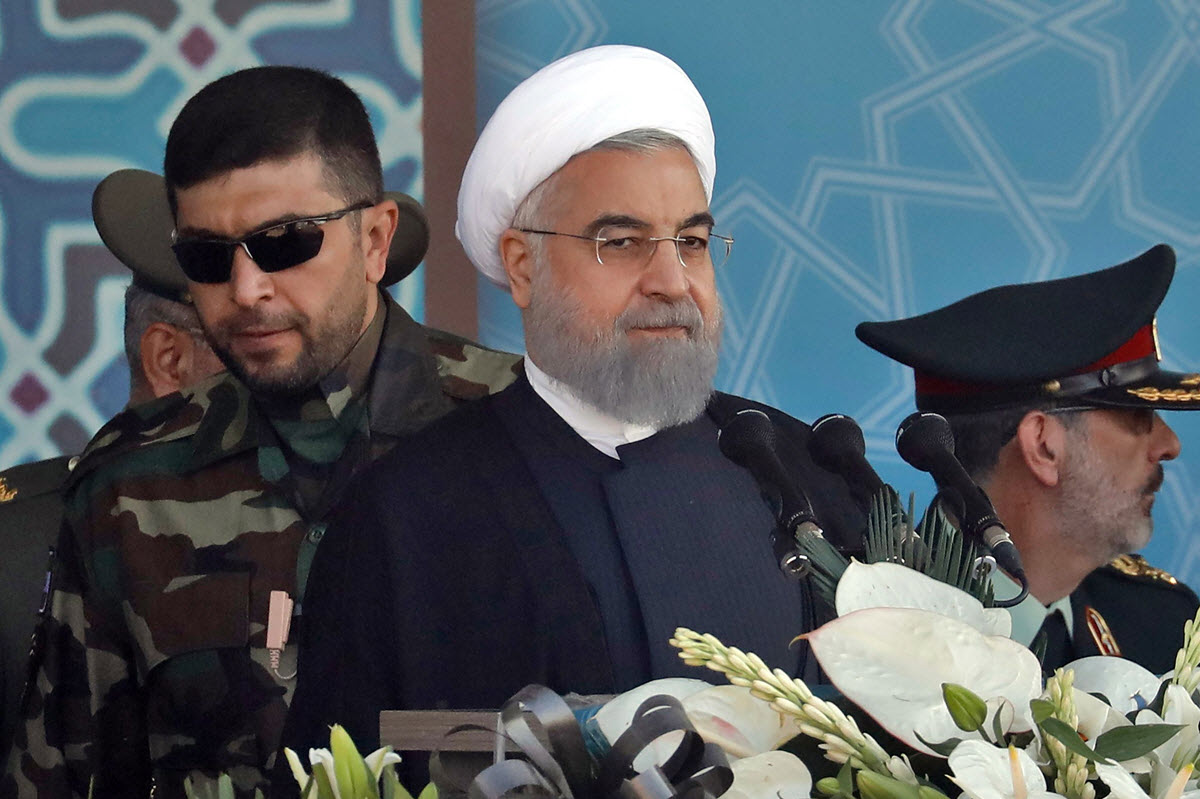 “[The regime’s] wealth, which rightly belongs to Iran’s people, also goes to shore up Bashar Al Assad’s dictatorship, fuel Yemen’s civil war, and undermine peace throughout the entire Middle East,” Trump said in his speech. “We cannot let a murderous regime continue these destabilizing activities while building dangerous missiles and we cannot abide by an agreement if it provides cover for the eventual construction of a nuclear program.”

Trump’s speech was followed on Wednesday by a speech from Iranian President Hassan Rouhani, also before the UN General Assembly. In it, he insisted that Iran would remain committed to the nuclear agreement and he dismissed Trump’s account of the regime’s overall behavior. Side-by-side, the speeches showcased a seemingly ever-escalating war of words between the two nations. And Rouhani’s support of hardline anti-American rhetoric was underscored during Friday’s military parade, when the Iranian president addressed the Revolutionary Guards and their supporters.

In that latter speech, Rouhani said, “We will promote our defensive and military power as much as we deem necessary. We seek no one’s permission to defend our land.” Rouhani has repeatedly stood beside hardline figures, including Supreme Leader Ali Khamenei and officers in the IRGC, in rejecting the notion of any restrictions on the country’s missile capabilities or military development. Intermediate and long-range ballistic missiles are generally designed to be capable of carrying nuclear weapons, and so Iran’s development of these weapons was a matter of some dispute for nuclear negotiators.

Ultimately, the missile issue was left un-addressed by the Joint Comprehensive Plan of Action, but UN Security Council Resolution 2231, as a side agreement to the nuclear deal, called upon the Islamic Republic to avoid work on such weapons while the JCPOA remained in effect. Tehran has ignored this provision, characterizing it as voluntary and suggesting that it does not refer to Iranian ballistic missiles, because they are not intended for nuclear weapons, regardless of their capability.

Rouhani’s steadfast endorsement of this position has helped to cast doubt upon the extent of his commitment to negotiating with the international community and pursuing rapprochement with traditional adversaries of the Islamic Republic. This in turn reflects the widespread criticism of some Western leaders’ efforts to characterize Rouhani as a relative moderate within the Iranian regime. This description was arguably a major contributing factor in the development of international consensus on the nuclear deal. And some human rights advocates have added that this moderation narrative also served to distract attention from domestic issues in the Islamic Republic that have either stayed the same or even grown worse under Rouhani’s presidency.

This was the focus of a series of protests that coincided with Rouhani’s visit to New York for the General Assembly. The Iranian-American political science Majid Rafizadeh described these demonstrations in an editorial that appeared in the Huffington Post on Thursday. The article explained that more than 3,000 executions have taken place in Iran since Rouhani took office, thus maintaining the Islamic Republic’s status as the country with the highest rate of executions per capita. It also noted that the president has implicitly endorsed the execution of political opponents of the theocratic regime, having appointed two justice ministers who were major participants in the massacre of approximately 30,000 political prisoners in the summer of 1988.

According to Rafizadeh, the New York demonstrations also called attention to 11,000 protests that are known to have taken place in Iran over the past year, with their underlying message being the rejection of even supposedly moderate voices in the Islamic Republic, in favor of an actual democratic alternative.

This is something that Mr. Trump made reference to in his speech to the General Assembly, declaring that “the entire world understands that the good people of Iran want change,” and that “oppressive regimes cannot endure forever and the day will come when the people will face a choice.”

In light of such commentary, it seems clear that the White House has largely joined Iranian expatriate protestors in rejecting the notion of moderation under the Rouhani administration. But it remains to be seen whether other world leaders will change their positions with regard to this narrative. For the time being, it is not possible to draw any definitive conclusion from their interactions with Rouhani and his colleagues at the General Assembly.

Reuters reported on Friday that UN Secretary General Antonio Guterres had reached out to Rouhani directly to appeal for the humanitarian release of Baquer Namazi, an 81-year-old former UN official and Iranian-American dual national who was sentenced last year to 10 years in prison after returning to Iran in an attempt to visit his son, who was also sentenced to 10 years on unsubstantiated charges of espionage. On one hand, Guterres’ communication with Rouhani over this issue could be indicative of persistent confidence in the Iranian president’s willingness and ability to intercede in domestic affairs for the sake of moderation or global cooperation. But on the other hand, that same outreach could mark Guterres’ recognition of Rouhani’s failure to counteract hardline trends, or his disinterest in doing so.