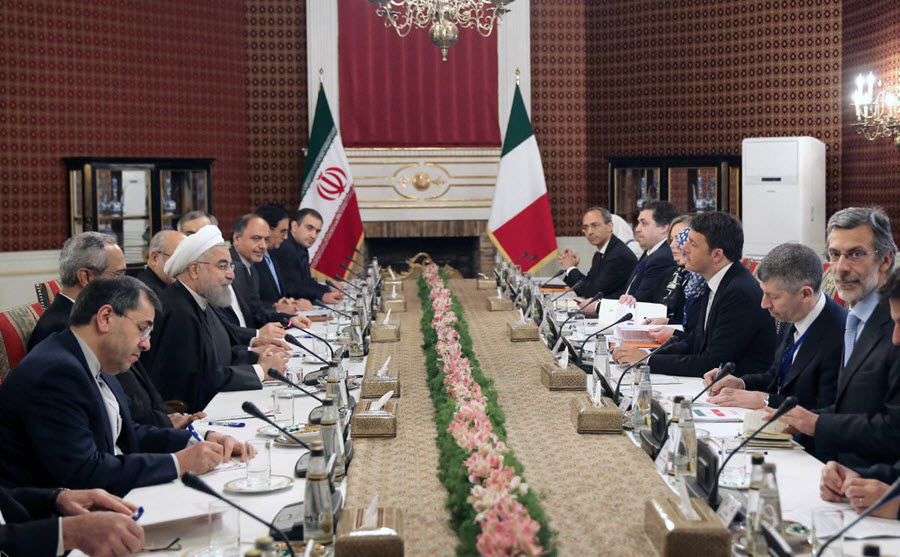 But Rezi’s visit is far from being the first high-level exchange between the two countries in the time since the JCPOA talks were concluded in July. Italy was among the first European countries to send trade delegations to the Islamic Republic to discuss investment opportunities, oil sales, and collaborative projects. Rome also played host to President Rouhani in January, during a visit that also took the Iranian executive to Paris.

Azer News pointed out on Tuesday that by the time Rouhani left Italy, the two countries had concluded 37 deals for economic collaboration and had signed 30 documents to that effect. The total value of these projects was estimated to be approximately 17 billion dollars. Renzi’s visit had reportedly already begun to expand upon this on Tuesday with the signing of additional bilateral agreements focused on the areas of oil and gas development, alternative energy, automobile production, and Italian participation in the renovation of an airport in Tehran.

Iran’s commercial airline industry has been deeply affected by economic sanctions and is badly in need of modernization. This fact has already led to the signing of a 25 billion dollar deal between Iran and the French-based aircraft manufacturer Airbus.

On the other hand, American companies like the air industry giant Boeing have been reluctant to enter into agreements with Iranian entities, for fear of lingering threats of US sanctions enforcement. But this situation appears to be changing in the midst of the ongoing interchange of Iranian and European officials. Furthermore, the White House reportedly assigned diplomats to discuss the nuclear deal with business leaders in recent weeks and convince them that they have little to fear from re-engaging with Iran.

These things appear to be having an impact, as evidenced by the fact that Renzi’s visit began a day after representatives from Boeing finally visited Tehran. That visit was even more historic that the Italian Prime Minister’s insofar as it was the first such visit by the American manufacturer in nearly the entire 37-year history of the Islamic Republic.

A report by the Associated Press apparently confirmed that Boeing’s wariness had diminished as a result of White House efforts. That is, the company’s leadership perceived more permissiveness from the Department of the Treasury, allowing the company to offer to sell at least three models of jet aircraft, as opposed to merely providing “commercial passenger aircraft fleet planning.”

It remains to be seen how lucrative this change in policy will prove to be for Boeing and whether it will result in similar steps by other US-based companies. On Tuesday, The Street published an article analyzing the likely impact of the visit upon Boeing’s stock prices. It claimed that a boost to those prices was uncertain at best, and quite unlikely unless Iran opts to gamble on an order of a significant quantity of the larger models of aircraft that Boeing is offering.

Numerous Iranian officials have been highly optimistic about their prospects for economic recovery, at least in their public statements. Whether or not these statements are sincere, they are certainly aimed at encouraging continued re-engagement from Western governments and business, for the sake of acquiring upwards of 50 billion dollars in annual foreign investment.

So far those efforts have succeeded in keeping up a steady flow of European and American delegations and agreements. And even without estimating how much investment it will help Iran to secure, this fact alone is sufficiently troubling to many opponents of the Iranian regime. Those individuals and groups have variously raised concerns about the possible misappropriation of that investment, leading to a growth in Iran’s military power, regional influence, and repressive domestic infrastructure.

Concerns along these lines were expressed, for instance, by UK Member of Parliament David Amess in an editorial published Tuesday in The Diplomat. The article focused upon Renzi’s visit and criticized him and other European heads of state for ignoring the various protests that have dogged every expansion in relations between Iran and major Western powers.

Many such protests, including those that coincided with Rouhani’s visits to Rome and Paris, have sought to bring attention to ongoing human rights abuses. In his editorial, Amess echoed those protestors’ calls for European governments and business interests to make it clear that any expansion in trade relations with the Islamic Republic will be predicated upon improvements in the country’s human rights record.

Similarly, American congressional opponents of the White House’s Iran policy have attempted to initiate legislation that would bar the US from releasing funds to Iran unless it can be proven that that money will not contribute to human rights violations or the support for international terrorism.