Finally, after a long debate on the plan to protect the rights of users in cyberspace and the organization of social messengers, on July 29, 2021, the Iranian regime’s parliament approved that this plan is considered through a joint commission.

After several weeks of controversy, with 121 votes in favor, 74 against, and nine abstentions from a total of 209 MPs present, the regime’s MPs approved that the plan to protect the rights of users in cyberspace and organize social media be considered as the eighty-fifth principle of the Constitution. The plan has been on Parliament’s weekly agenda for the past few weeks.

According to Article 85 of the regime’s Constitution, “the position of a representative is independent of the person and cannot be delegated to another. The Parliament may not delegate legislative authority to a person or body, but may, if necessary, delegate the power to make certain laws to its internal commissions following Article Seventy-two. In this case, these laws will be implemented on a trial basis for a period to be determined by the parliament, and their final approval will be with the parliament.”

A draft of the plan has been published, according to which foreign messengers must establish an office inside the country. Many people and even elements of this regime have called the issue, and the plan in general, harmful to businesses and society, a point that was also made by lawmakers opposed to the plan.

In this regard, Hossein Mohammadyari, a lawmaker from Tavalesh, said: “If we, as members of the Islamic Parliament, seek to protect the rights of the people, we must respect their concerns. People are the best discerns in cyberspace. With the introduction of this plan, many people came to us and expressed their concerns. Today, cyberspace is an important platform for businesses. Many of the restrictions imposed on the scheme affect people’s small businesses.”

Jalal Mahmoudzadeh, a lawmaker from Mahabad, expressed these words differently and said: “According to this plan, foreign virtual networks must establish an office within four months inside the country. We know that this is not practically possible and will lead to their closure of businesses.”

Massoud Pezeshkian MP from Tabriz wrote on his Twitter page: “As I said at the beginning of the so-called cyberspace protection plan, I am against it, and I believe that the parliament plan will not be successful in society. Not only will this plan not succeed in achieving its goals, but it will lead to a widening gap between the people and the government.”

Hamid Aboutalebi, a former Rouhani adviser, wrote in a tweet: Cyberspace is one of the most important economic, political, social, cultural issues and related to the fate of more than 50 million Iranians and is an example of Article 59; Therefore, its fate was determined following Article 85 and by a group of 15 people with the vote of 121 people out of 290 representatives, which means a violation of Article 59 of the Constitution and destroying the rights of the nation and the fate of the people.”

Ahmad Zeidabadi, journalist and political analyst, said about the regime’s inability to block the internet: “It has been said many times that fighting technology is useless and is like fighting a windmill! The world will soon see the development of satellite internet; A phenomenon that is neither controllable nor limitable. Therefore, the bitter and harmful experience of dealing with cassette tapes, video devices, satellite dishes, etc. And finally, accepting all of them, after imposing heavy psychological and cultural costs on society and provoking public anger about the Internet, is nothing but a continuation of stubbornness to destroy the nation’s nerves!” (State-run daily Arman) 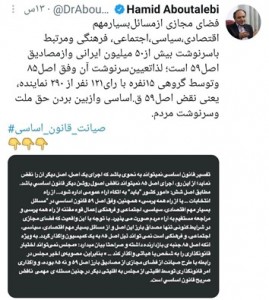 The regime’s Minister of Culture and Guidance, Seyed Abbas Salehi, wrote in a tweet warning about the “Protection of the Rights of Social Network Users” plan: “A polarized society is a road to death, and unfortunately, every day there is a new polarization. And Today: We are splitting the body of the society into two parts with a chopper. The vultures are waiting! Beware of Iran.” 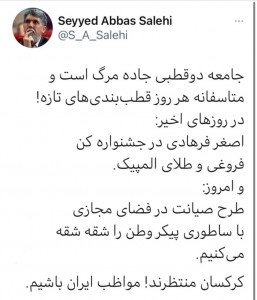 The reason for such a decision by the regime’s parliament even while many of the regime’s officials and elements are criticizing it is easily declarable:

Ensuring the regime’s domination in Iran by turning it into a large, isolated village. A village with the social and economic relations of the feudal era in which cultural backwardness is institutionalized in addition to an economic regression.

The people should only be busy with their work and be held captive by the daily life struggle so that the regime’s officials can freely loot and destroy this country. While the Internet and the free flow of information have blown up such a dream over the past years and made this caliphate perforated and ineffective.

Social networks have become a means of expressing public opinion and sympathy. People expose themselves in this way and stay up to date with the latest uncensored news.

This free flow of information is dangerous for the Velayat-e-Faqih system; Because in times of need, it is an effective coordinating tool for organizing and directing protest movements.

With the existence of smartphones, each Iranian has become a mobile and independent reporter. News in the form of text and media is quickly transmitted to the world. News of uprisings and social protests have a special place in this. By posting them on the Internet, the regime’s options are limited for repression.

In a situation where Iran is burning because of various crises, the priority of the regime’s parliament is not the people’s pains, but also to protect the regime and prevent its overthrow.

This vicious priority is pursued under the guise of a repressive plan: “Protecting the rights of users in cyberspace.”

Isolation and Death of Social Sciences in Iran