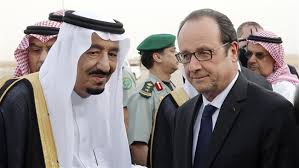 After meeting on Monday, Hollande and Saudi Arabia’s King Salman said that any nuclear deal that is signed between Iran and the P5+1 group, of which France is a part, must safeguard the security and stability of the broader Middle East. A senior French diplomat added, referring to the GCC, “They have a real fear that when sanctions are lifted, Iran will be able to finance all its proxies across the region.”

These proxies include Lebanon’s Hezbollah paramilitary, Shiite militias fighting against the Islamic State in Iraq and Syria, and the Houthi rebels who have seized control of much of Yemen, thus threatening the border of Saudi Arabia, the main regional adversary to the Iranian regime.

AFP reports that Saudi Arabia separately called for action against Iran’s regional influence after the Houthi launched an attack on the Saudi city of Najran from across the border with Yemen. This escalation comes in the wake of a Saudi-led bombing campaign against Houthi targets. The end of that campaign was originally announced at the end of April, but continued military action by the Houthi prompted the Saudi-led coalition to restart bombing.

This, coupled with the repulsion of Iranian arms shipments to the Houthi and Iran’s possibly retaliatory seizure of a commercial vessel in the Persian Gulf, points to the danger of further escalation of tensions among Saudi Arabia, Iran, and various allies on both sides.

King Salman told the GCC leaders that Iran, “aims to expand control and impose its hegemony” in the region. It is of course understandable that the Saudis would pursue vigorous opposition to this situation, considering that such hegemony threatens to put pressure directly on Saudi borders. Yemen is an example of this, but not the only example.

Iran’s backing of Shiite militias in Iraq threatens to give the Islamic Republic a permanent foothold just north of Saudi Arabia, as does its apparent political overtures to Kuwait. On Tuesday, MENA FN reported that former Kuwaiti lawmaker Waleed al-Tabtabai had claimed that Iran was pressuring the Kuwaiti government to remove the aging Crown Prince Sheikh Nawaf Al-Ahmad Al-Sabah, and replace him with an heir who has close relations with Tehran.

Kuwaiti authorities subsequently arrested Tabtabai, accusing him of “spreading false news.” But this cannot be expected to do much to suppress questions about the extent of Iran’s attempt to inject itself into the affairs of other countries in the region.

However, some opponents of the Iranian regime are of the opinion that even though the attempted meddling in places like Kuwait is genuine, it is aimed more at spreading propaganda for the Iranian regime than at asserting any actual power. In a conference at the French Senate on Monday, National Council of Resistance of Iran President Maryam Rajavi told assembled lawmakers and dignitaries that the Iranian regime is extremely unstable and only “falsely portrays itself as a regional power.”

On Tuesday, the National Interest presented a similar picture of the Islamic Republic as it pointed out that recently revealed satellite imagery indicates that a supposed replica of a US aircraft carrier that Iranian authorities claimed to have sunk in a military exercise in February was never really sunk at all.

Fars News Agency had previously claimed: “The model was built in real size and came under attack and was destroyed by missiles and rockets fired from tens of [Islamic Revolutionary Guard Corps] speedboats. Also a number of the IRGC cruise and two ballistic missiles were fired at the mock US aircraft carrier.” These seemed to follow upon the previous claim by IRGC Navy Rear Admiral Ali Fadavi, who said that Iran possessed the military capability to sink a US warship in under a minute.

The stellite images show that contrary to this bluster, the IRGC Navy may have failed in its attempt to sink a mock-up US aircraft carrier even though it was immobile and possessed no defensive weapons.