After the death of the chief of the Revolutionary Guards’ Quds Force (IRGC-QF) Qassem Soleimani, the Iranian regime’s meddling in the Middle East has received an irreparable blow. Notably, Soleimani played a key role in the crackdown on the Iraqi protests.

In this context, the elimination of the IRGC-QF chief delighted Iraqi people and many of them flooded into the streets to demonstrate their happiness on the same day.

In such circumstances, the Iranian regime’s supreme leader Ali Khamenei as the main enemy of Iraqi protests tried to deviate the path of the Iraqi revolution. In this respect, he assigned his mercenaries to hold counter-demonstrations in tandem with conducting political maneuvers.

He ordered his Iraqi agents to recognize and support Moqtada al-Sadr as a “leader” of the people. In truth, Khamenei relied on mercenaries who were trained in Iran for many years.

In 2003, after the U.S. invasion of Iraq, the Iraqi agents of the Iranian mullahs interfered in the highest ranks of Iraq’s military-governmental hierarchy to perform the orders of their masters in Iran.

A Book of the Iranian Regime’s Mercenaries in Iraq

On January 26, 2007, the National Council of Resistance of Iran (NCRI) revealed the identities of tens of thousands of Iraqi officials who were serving Tehran. At the time, the NCRI held three simultaneous press conferences in Paris, London, and Berlin.

NCRI representatives offered a classified document obtained by supporters of the People’s Mojahedin Organization of Iran (PMOI/MEK). The document consisted of names, specifications, a monthly wage, etc. of around 32,000 of the Iranian regime’s mercenaries in Iraq.

The NCRI also provided sensitive details about the IRGC-QF’s network that is used for sending weapons and ammunition to Iraq. At the conferences, representatives of the Iranian Resistance (NCRI) exposed details of the IRGC-QF hierarchy and affiliated networks, traffic paths of the IRGC agents and their terrorist agents, and gates for smuggling the weapons and ammunition. Notably, many Iraqi figures later confirmed the accuracy of the NCRI revelations.

Mohammad Mohaddessin, the head of the NCRI foreign affairs committee, unveiled new dimensions on the Iranian regime’s influence in Iraq. He also pointed out the direct role of the IRGC, IRGC-QF, and Iran’s Ministry of Intelligence and Security (MOIS) in the creation and expansion of intelligence and terrorist networks in this country.

Mohaddessin also revealed that the Iranian regime is behind producing and importing progressive improvised explosive devices (IED) in Iraq. Since 2004, IEDs have killed or injured many people including opponents of Iran’s influence in Iraq in addition to many U.S.-led Coalition forces.

“In this document, you have 31,690 mercenaries from the Iranian regime. The nationality of all these are Iraqi, but they are paid by the Iranian regime,” Mohaddessin said. He clarified that the document is part of the entire confidential information that has been obtained by the MEK sources inside the IRGC.

According to evidence provided by the NCRI representative, all the mentioned mercenaries were hired by the IRGC-QF. Mohaddessin mentioned that most names are related to the Badr Organization and the Islamic Supreme Council of Iraq, in addition to many figures and movements that were funded by the Iranian regime.

Iran’s Mercenaries Enjoy Two Houses and Families, One in Iraq, and Another in Iran

The document also included the Iraqi name and also the Iranian name of each IRGC member in Iraq. This means the mercenaries who live in Iraq also have an Iranian name. All these people are official members of the IRGC-QF.

Additionally, the personnel code, the individual account numbers of these men and their salaries were stated in the document. The document declared the personal specifications, membership date, name of their military unit, military rank, and personnel number when they served the IRGC-QF.

It also revealed that after 2003, these mercenaries in big groups entered Iraq under the command of Qassem Soleimani, current Iran’s ambassador in Iraq Iraj Masjadi, the commander of Ramazan forces Ahmad Frouzandeh, and another IRGC commander Hamid Taghavi.

And many of them have posed in the highest ranks of the Iraqi government and parliament. The names have been mentioned in the document. Also, several highest, special figures such as Abdul Aziz al-Hakim were not noted on the list because the IRGC headquarters have separated communications with them.

Many international presses and news agencies covered the NCRI press conferences. The Associated Press reflected the news of the conference and released a film including the interview with the head of the NCRI foreign affairs committee. 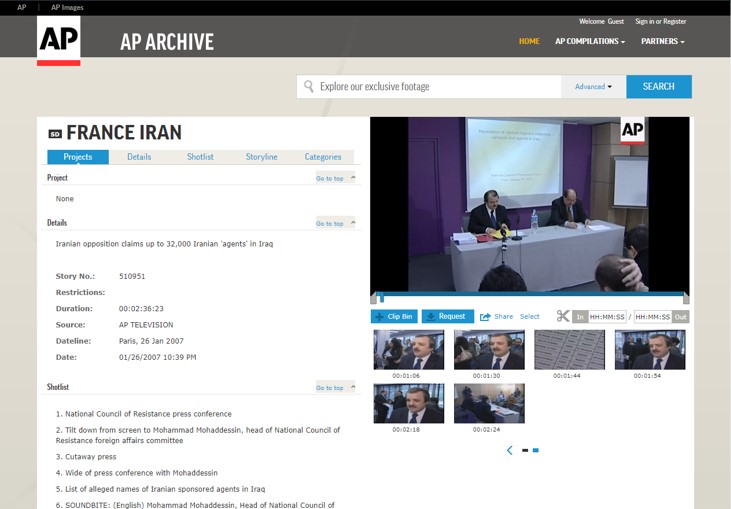 “Alireza Jafarzadeh, an Iranian opposed to the current regime in Tehran, divulged in New York Tuesday information he received from sources inside Iran — mainly from the MEK — with which he enjoys close ties.

The MEK… released a list of nearly 32,000 Iraqis on Tehran’s payroll, including senior Iraqi government officials,” the Washington Times published in March 2007. This newspaper in an article titled, “Iran training Iraqi death squads?” added, “These individuals travel to Iran in different groups, under different covers and use various legal and illegal borders, and go back to Iraq after their training is complete.

According to information obtained by the MEK, since February 2006 Iraqi militias affiliated with the Quds Force, such as the Supreme Council for the Islamic Revolution in Iraq — SCIRI — the Badr Corps, Hezbollah, Islamic Revolution Mujahideen, and Seyyed-of-Shohada Movement have traveled to Iran in groups and are trained in various camps of the Quds Force.” 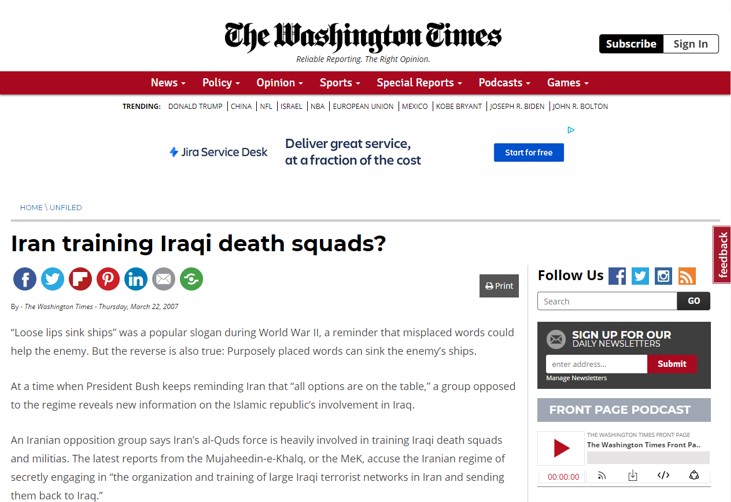 Also, In January 2007, Aljazeera.net published an article in Arabic that covered the NCRI revelation about confidential information related to the Iranian regime’s recruitment in Iraq. “The MEK movement revealed the names of [around] 32,000 Iraqis who are definitely mercenaries of the mullahs’ regime in Iraq and are paid by Tehran,” Aljazeera.net wrote. 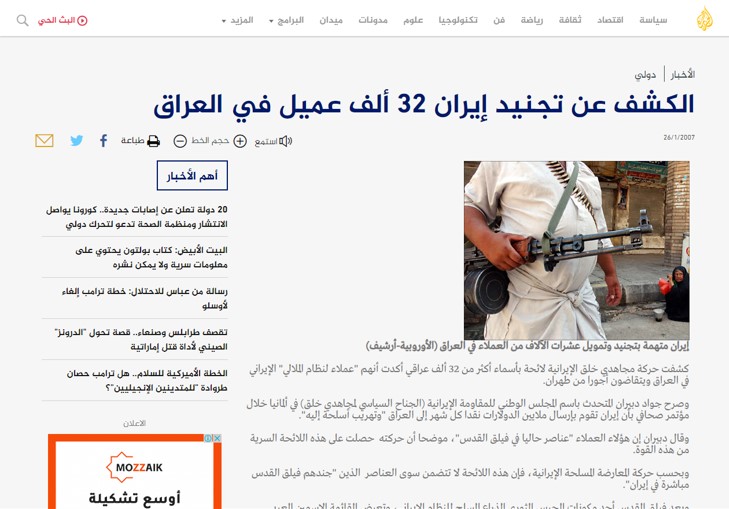 The fact is that Iranian mullahs see Iraq as their gate for influence in the Arabic states. In this context, since 1979, they have constantly tried to occupy this country as the main part of the establishment of a “Shiite Crescent.”

Therefore, they seized the opportunity of Iraq’s invasion by the then-U.S. administration and spread their agents in all Iraqi apparatus. In 2009, they practically completed their operations, and the hidden occupation became obvious.

Before Coalition forces’ retreat from Iraq, the Iranian regime’s then-president Mahmoud Ahmadinejad rudely announced his government’s readiness for filling the “vacuum of power” in Iraq. The regime has effectively gone down this path and taken all of Iraq’s affairs under its control.

In this respect, the NCRI revelation alerted the world about the ominous intentions of the mullahs’ regime in Iraq. Following the revelation, Khamenei assigned Abdul Aziz al-Hakim to perform the Iranian regime’s plan for expelling the MEK members from Iraq.

“Iranian officials declared that the Iraqi government should resolve the problem [of expelling the MEK from Iraq],” the IRGC-owned newspaper Javan quoted the current Iraqi prime minister Adil Abdul Mahdi as saying on February 1.

Then-prime minister of Iraq Nuri al-Maliki also pretended that the MEK presence in Iraq was one of the main obstacles toward the implementation of the security plan of Baghdad. He threatened the U.S. that the plan would not be implemented until the MEK departed from this country.

However, today the Iraqi people well realized that their enemy was, is, and will be the Iranian regime and its malign meddling in this country through tens of thousands of mercenaries.

On the other hand, they grasp that the eviction of the mullahs’ regime and its militias, “parties,” and vassals in their affairs is the sole solution for a democratic Iraq. In this respect, they target this regime and its affiliates and state that they won’t return home until they expel all of Iran’s mercenaries and establish a new government that refuses sectarianism, discrimination, and fundamentalism. A government that takes its credit through ballot boxes, not via Iran-backed “politicians.”