One of the main characteristics of the Iranian regime is its violence against women. Iran’s rule controlled by the fundamentalist mullahs has created a hell in Iran for the women, who are facing any kind of pressure. Their backward laws have created one of the worst misogyny atmospheres in the world.

Making the hijab compulsory for women has allowed the regime to implement any kind of repression against women. Left no rights for them, therefore by the regime’s laws women are secondhand citizens, having even not the half rights of a man.

From the beginning, the regime started the regime with the slogan “either the veil or a hit on the head” to humiliate and terrorize women and follow the general population. This led to the brutal enforcement of a dress code. Making the women defenseless, unfortunately, this had many social consequences, that we are reading every day from the country’s media.

A few days ago, in a new case, two girls were shot dead by their family members in a village in the province of Sistan and Baluchestan.

A video posted on social media showed that locals found the bodies of two girls near a road. The regime’s state-run media confirmed the news and said that the reason for this action was because of the frustration of their families about their running away from home for several days. Hamshahri Online daily reported that the girls were 17 and 18 years old.

The main reason for such a social crisis is due to the regime’s inhuman laws. According to the Iran regime’s law, human lives have no value at all, and their lives are priced on a material basis. Accordingly, the value of a woman is half the value of a man. Signs of the worthlessness of human life are well seen in Islamic penal laws and retribution.

According to Iranian civil law, women are not independent beings of fathers, grandfathers, brothers, uncles, and wives, and are generally owned by the men of the family, and this is a very strong ground for murder and violence against women in general. In other words, there are indirect legal permits for all forms of violence and its most acute form, murder, in law.

But that’s not all. Another reason for that is the daily attacks of the regime’s elements against women. On December 28, 2021, morning, when some women go to Darakhti Street Park in Maryam Town (Phase One of Andisheh) in Shahriar for morning exercise they encounter a strange event.

A masked man, an element of the regime was hiding behind the bushes, and when the women started their exercise, this man sprayed acid on the women and fled. Because of this criminal act, one of the women was transferred to the hospital because of the injures caused by the acid. 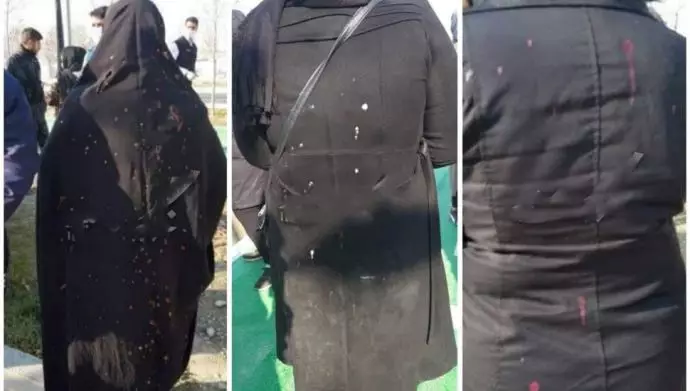 Another strange event is the regime’s decision not to allow the people to install tombstones of women without hijab. Saeed Ghazanfari, Behesht-e Zahra’s director, has said that it is forbidden to put photos without a hijab on women‘s graves and that Behesht-e Zahra authorities are “preventing the installation of tombstones without hijab and unconventional images.”

“To prevent the installation of tombstones that have an unusual and (women) without hijab images, all protocols are presented to the person at the burial of the deceased and approvement is taken, but later people may install such tombstones.” (State-run news agency Fars, December 27, 2021)