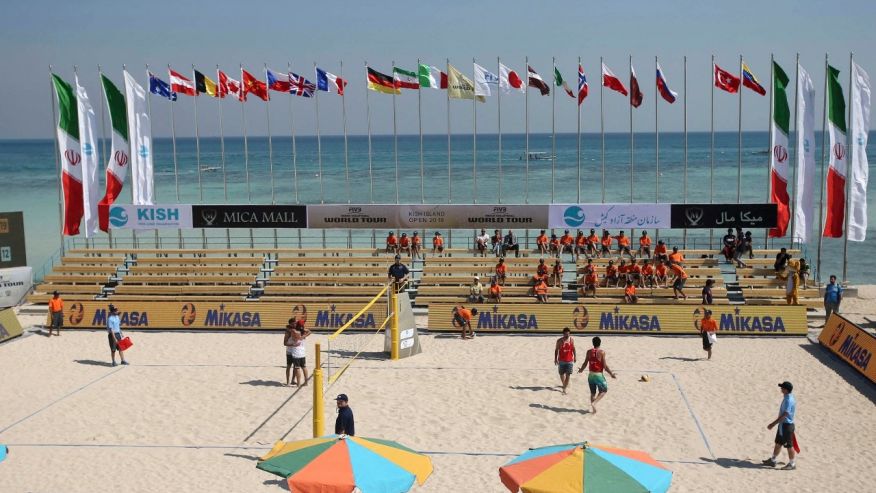 The International Volleyball Federation came under fire after the latest incident because a spokesperson dismissed it as the result of “misunderstandings,” as well as suggesting that the issue was resolved after some women were allowed to watch the competition from a café overlooking the main court.

The FIVB had formerly responded to pressure from women’s rights activists by saying that Iran would no longer be permitted to host competitions as long as the ban on female attendance was still enforced. But after the organization’s handling of the Kish Island competition, Minky Worden, the director of global initiatives for Human Rights Watch said, “This sorry episode highlights the shortcomings of the FIVB’s strategy with the Iranian government, and contradicts their claims that all Iranian fans are welcome.”

Other human rights organizations and political opponents of the Iranian regime are sure to note that the latest enforcement of the ban on women at sporting events also highlights the persistence of the regime’s crackdown on progressive social trends and perceived foreign influence, especially in the wake of the July 14 nuclear agreement.

The same repressive efforts have attacked social activities like male-female comingling, but also the activism and efforts at social organizing which have allowed some Iranians to push for a more open social and cultural environment. Naturally, the internet and social networking applications are among the resources that have been utilized toward that end. And just as naturally, the regime continues to take aim at them, as evidenced by a pair of recent reports from different news sources.

One of those reports indicates that Mohammad Reza Aghamiri a member of the Filtering Committee of Iran’s censorship authorities, had threatened the popular instant messaging application Telegram over the fact that the relatively new social network is particularly difficult for authorities to monitor.

The servers for Telegram are currently located outside of the country, and Tehran has demanded that future domestic activity on the service be routed through locally-based servers, a move that would give Iranian authorities access to all communications taken place on it, as well as facilitating their filtering of material deemed objectionable by the regime. Agharimi said this week that if Telegram does not comply with these demands, the service “will be removed, not blocked.”

It is unclear what this would mean. Other popular social networks like Twitter, which was a major organizing tool for the 2009 Green Movement, are blocked by Iranian internet service providers, but many young Iranians circumvent those restrictions through the use of proxy servers and other tools. The actual removal of a site from the country would presumably require isolating the Iranian internet from the rest of the world. And this may indeed have been what Agharimi was referring to, as the Iranian censorship authorities have long claimed to be on the verge of establishing a “National Internet” wherein only regime-approved content would be displayed.

Another report  indicates that some of Agharimi’s colleagues and fellow conservative politicians have continued to push this idea in recent days, apparently overestimating the prospects for something that the regime has made little noticeable progress toward. The idea has reportedly been bandied about the regime for approximately 12 years, but even now it remains beyond the country’s capability, as well as being a daunting undertaking for even more advanced nations.

In the absence of an “halal internet,” some conservative politicians have taken to criticizing any efforts to expand or improve internet service in Iran, especially ahead of the February 26 elections for the parliament and Assembly of Experts ,Supreme Leader Ali Khamenei issued a decree in 2012 that internet speeds should be deliberately slowed until the establishment of the National Internet. This week, the Basij News Agency claimed that the order remains in effect, along with the pronouncement that speeds in excess of 128 kbps would speed the “spread of lies.”

Such commentary speaks to the Iranian regime’s tendency to regard the free exchange of information as a criminal act. And this in turn helps to explain the situation highlight by in another report : that the Iranians released from US custody as part of last month’s prisoner swap have been largely unwilling to return to Iran, whereas the American-Iranian dual citizens released from Iran were quick to return to the US.