It was reported that two prisoners were hanged on Saturday 10th August. The prisoners were not named in state media, but they were incarcerated in the central prison of Mashhad.

Last week, five prisoners in the Raja’i Shahr (Gohardasht) Prison in the city of Karaj were hanged. They were transferred to solitary confinement before their executions took place. They have been identified as Mohammad-Reza Shekari, Yousof Zakeri, Majid Arabali, Hossein Panjeh-Maryam and Bahram Tork.

Iran Human Rights Monitor has reported that there have been 39 executions during the month of July. Four of these were women and one was done in public. The human rights organisation said that executions took place in a number of prisons across the country.

The organisation’s annual report for 2018 said that there were almost three hundred executions that year alone. At least four of these were women and 10 were political prisoners. Furthermore, a handful of these executions were on prisoners who were minors at the time of the alleged crime.

The Iranian regime uses execution as a means of supressing the people and trying to threaten them into silence. However, the people of Iran have been so badly mistreated by the regime for so many years that they are risking everything – arrest, torture, imprisonment and execution – to make sure that their voices are heard.

The human rights situation in the country is deplorable and the most basic of freedoms are denied to the people. Minorities face harsh discrimination, especially religious and ethnic minorities. Human rights activists, lawyers, journalists, women and many more sectors of society are targeted by the regime that is unable to cope with the high levels of discontent and dissent.

The people have been calling for regime change because they know that the only way they will ever have their human rights respected is if the regime falls and is replaced by an alternative that will not discriminate.

Human rights organisations have drawn attention to the Iranian regime’s use of violence against protesters. Amnesty International highlighted the mistreatment of the people of Iran in its annual human rights report. It said that during the major nationwide protests in which tens of thousands of Iranian men and women protested about their situation, thousands were arrested.

Iranians across the country took to the streets to protest against the repression, poverty and corruption that they face. During the protests, the security forces were seen beating protesters, using water cannons and tear gas, and firing on them. No one has been held responsible for the brutality against the protesters.

Amnesty International said that Iran is one of “the world’s most prolific users of the death penalty” and deplored its practice of executing individuals that were under the age of 18 at the time the alleged crime was committed. 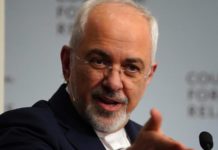 Iran Appeals for Help From the UN, but International Trends Are Against the Regime