At the beginning of September, the Iranian Resistance movement marked the 55th anniversary of the People’s Mojahedin Organization of Iran (PMOI/MEK) with a special ceremony at their current headquarters in Albania, Ashraf 3.

The ceremony was centered on a speech by Mrs. Maryam Rajavi, the president-elect of the National Council of Resistance of Iran,  which we will cover in this short series.

In this part, we will look at Maryam Rajavi’s comments on how the regime is stuck in a whirlpool dragging them down in the heavy waters of political, economic, and international crises.

She began by citing Supreme Leader Ali Khamenei is incapable of offering change to reduce the people’s anger and that his appointment of corrupt and criminal officials to the heads of various institutions is not a show of strength, but one of utter weakness.

Maryam Rajavi said: “It is an attempt to exert more control over various branches and to prevent the regime’s collapse. Just like Qassem Soleimani, major projects like the [2015] nuclear agreement and the so-called reformist and moderate government of Rouhani have failed, with nothing remaining of them but lifeless bodies. The regime’s followers who dreamt of reforms are now seeing the nightmare of being overthrown.”

She advised that all those who support the regime and hoped for the protest movement to end are now disillusioned because the people feel strong enough to bring about change.

Maryam Rajavi said: “Fear has switched sides. Today, the mullahs and their IRGC are trembling with fear. The values and traditions of the PMOI/MEK, particularly the value of making the sacrifice to realize the regime’s overthrow, are guiding the younger generation on the streets.”

Mrs. Rajavi explained that the people who spontaneously rose up in over 200 cities in November have shown national solidarity and offer an image of future confrontations that will unseat the regime and put democracy in its place.

Maryam Rajavi then spoke about the coronavirus pandemic that has killed over 100,000 Iranians in seven months, most of which was completely avoidable, if only the regime used some of their hidden stolen billions to pay non-essential workers to stay home or to ensure that healthcare providers had enough personal protective equipment and medical devices necessary to do their jobs safely and effectively.

She said: “Some state officials admit that the regime’s conduct during the coronavirus crisis was not a political mistake but is tantamount to deliberate murder. Khamenei and [President Hassan] Rouhani seek to prevent their overthrow by creating a wave of human casualties. This horrendous crime, however, will only stoke the fury of the people and will further motivate them to overthrow the regime.”

Maryam Rajavi noted that the regime hasn’t even been paying the salaries of the nurses, doctors, and other healthcare workers who have risked their lives selflessly to treat patients around the clock.

She said: “Let us use this opportunity to once again appreciate them and their tireless efforts to save coronavirus victims. Let us applaud those who have lost their lives in this sacred effort.” 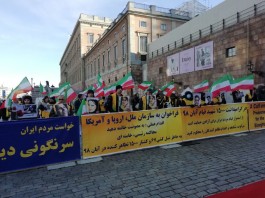