If this claim is accurate, it may somewhat alleviate the criticism that has been levied by human rights activist groups and political opponents of the Iranian regime in the days and weeks leading up to Mogherini’s visit. That sort of criticism has also surrounded a number of other state visits between Iranian and Western officials, including Prime Minister Matteo Renzi’s trip to Tehran earlier this week.

The National Council of Resistance of Iran pointed out that at least eight executions took place in Iran during the time that Renzi was in the country. The exiled resistance group went on to suggest that Mogherini’s visit would be sending the wrong message by implying that expanded relations with Europe would not depend upon Iran’s reducing its rate of executions or improving its human rights record.

In light of these criticisms, Mogherini’s raising the issue only after the fact cannot be expected to silence those who are demanding a more assertive human rights policy from Western leaders. Indeed, even the EU Bulletin report acknowledges that human rights appears to take a back seat to trade agreements and the European efforts to expand bilateral relations with the Islamic Republic regardless of its persistent illicit behavior. 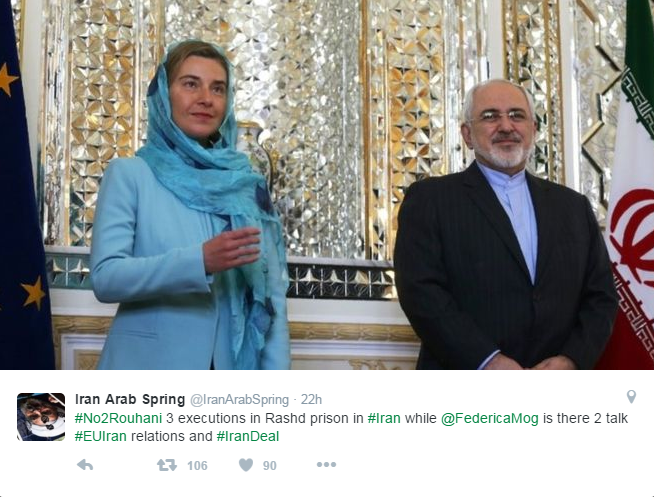 Interestingly, while many assessments of current Western policy indicate that the US and Europe regard trade as more important than social and cultural issues, the opposite may be true of Iran. There are various indications that the Iranian leadership considers the country’s Islamic and anti-Western identity so important that it is willing to compromise on matters of economic development in order to safeguard the regime’s social and cultural controls.

For example, CNN reported on Friday that Iran has some potential to develop its tech sector, but that this potential is notably held back by the persistence and further growth of the country’s restrictions on the internet and social media. These restrictions have been widely reported upon in the past, and they include outright bans on Twitter and Facebook, as well as ongoing efforts to entirely close off the Iranian internet from the rest of the world, so as to allow in only content that the regime authorities consider appropriate.

But the economic impact of these restrictions has been given less attention. That impact is made more important by the fact that, as CNN points out, Iranian Supreme Leader Ali Khamenei is currently pushing for diversity in the Iranian economy, so as not to leave that entire economy at the mercy of the possible renewal of sanctions on the energy sector.

In his speech on the occasion of the Iranian new year celebration of Nowruz last month, Khamenei declared the year ahead to be the year of the “resistance economy,” urging domestic development and arguably welcoming the cancellation or weakening of the July 14 nuclear agreement.

To the extent that restrictions on the internet undermine one of the economic sectors that might help in this project, those restrictions may seem inconsistent with Khamenei’s push for diversification. But these things seem less inconsistent if one considers the web censorship and the resistance economy to be motivated by the same goal: reducing the threat of foreign economic, political, and cultural influence.

In other instances, the tension between social repression and economic harm is even more explicit. For instance, on Friday an Iranian human rights group in Iran published a new report on the persecution of business owners who are also members of the Baha’i religious minority. Authorities regularly force the closure of such businesses, thereby not only contributing to the regime’s negative human rights record but also interrupting commerce that could be lucrative for the economy as a whole. There have been at least 80 of these forced closures since October 2014.

The report was sparked by a letter signed by “54 leading business people and economists from countries around the world” urging Khamenei to reverse course on this issue. Hadi Ghaemi, the International Campaign’s executive director added to this message: “The business community worldwide should let Iran know that if Iran wishes to be ‘open for business’ it must respect the law and the rights of Baha’is.”

Of course, such commentary clearly seems to serve as a response to the rush to invest in Iran in the post-sanctions era brought on by the nuclear deal. Visits to Tehran by Renzi, Mogherini and others help to support the notion that much of the world community already regards Iran as “open for business,” regardless of its treatment of the Baha’is, the country’s population of political prisoners, internet users, or Iranians as a whole.