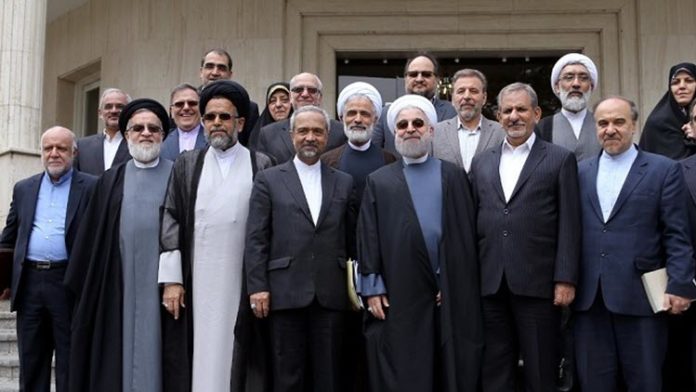 In its May 20th statement following the presidential election, the Iranian Resistance said, “In Rouhani’s second term massive economic and social destructions along with political suppression would continue. Rouhani neither wants, nor is able to seriously alter the foundations, structure or behavior of this historically backward regime… And indeed it should never be expected from him, who for the past 38 years has held the highest positions in the regime’s security and military apparatus in domestic suppression and war mongering. And as his rivals have noted, he was the one who called for public hanging of conspirators during Friday prayers right from the beginning.”

The new Minister of Communications and Technology, Mohmmad Javad Azari Jahromi, has been a Ministry of Intelligence (MOIS) agent since the age of 21. He was appointed to the MOIS Technical Department and Director of Surveillance during the 2009 uprising, and played a large role in arresting demonstrators and quelling the uprising. In his appointment of Azari Jahromi, Rouhani attempts to confront the growing influence of the Iranian Resistance among the Iranian people.

According to YJC website, associated to the IRGC, Jahromi said on July 17th, “We are blocking 3,300 Telegram channels each week and around 13,000 each month. For two years now we have been surveilling these channels, including pornography, religious beliefs and even political material… It is true that the channel of the People’s Mojahedin Organization of Iran (PMOI/MEK) is open, and as the leader has said these people have murdered our youth. The PMOI/MEK are using Telegram and other social media platforms to quickly publish their desired material.”

The YJC website, also published remarks by the director of the Working Group on Criminal Material Determination, “The PMOI/MEK are freely spreading propaganda inside the country through social media and providing material for our youth? In fact, these very channels have disrupted our order… We have been humiliated in social media…” he said.

Amir Hatami is Rouhani’s new Defense Minister, who is a member of the IRGC paramilitary Bassij, and who, according to state media, has a criminal past. Hatami also played an active role in confronting the PMOI/MEK during the 1988 Operation Eternal Light. State media wrote, that he had an “active and effective role in the struggle against anti-revolution groups and the PMOI/MEK, along with infiltration teams in the country’s northwest and western regions.” Iranian Supreme Leader Ali Khamenei sent him a letter of gratitude. Khamenei also appointed the 32-year-old to Brigadier General and Deputy Army Intelligence Chief of the Islamic Republic of Iran In 1999.

Rouhani’s new Labor Minister is Habibollah Bitaraf, a former member of the six-man central council of the students who supported former Iranian Supreme Leader Ruhollah Khomeini. He was also one of the officials in charge of raiding the US Embassy and taking it hostage in 1979. He was one of the initial organizers of the Construction Jihad foundation and a member of the IRGC during the bloody Iran-Iraq War of the 1980s.

The new Minister of Industry, Mining and Trade, Mohammad Shariatmadari, has been a senior official since the early days of the regime. He played an active role in establishing and organizing the “Revolution Committees” and the MOIS in 1985, after which, he was appointed Deputy Intelligence Minister. He was also allegedly involved in plundering ordinary people’s assets. He was in charge of the “Setad Ejraiye Farmane Hazrate Emam” – Headquarters for Executing the Order of the Imam,” which is said to be a massive economic cartel, controlled directly by Khamenei himself, with assets worth $95 billion, mainly from confiscating assets belonging to regime dissidents. (National Council of Resistance of Iran article, August 9, 2017)