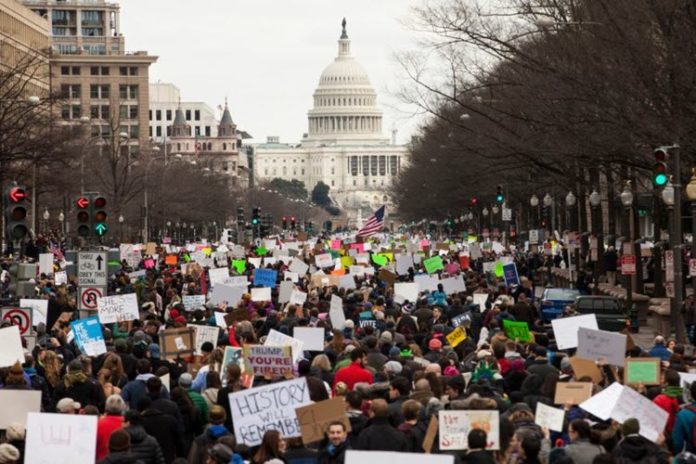 In the midst of large protests at American airports where travelers were said to be stuck in limbo as a result of the ban, a federal judge granted a stay to the American Civil Liberties Union, putting an end to the initial enforcement of some provisions of the order. But the Trump administration continued to clash with opponents of the measure, even as the media continued to report information regarding those who had already been affected by it.

The Associated Press described the case of an Iranian-born professor of religion who lives in Vermont and works at Middlebury College. Professor Ata Anzali was planning to visit Iran until spring with his wife and two daughters, but as of Sunday it was uncertain whether the family would try to return to the US immediately.

Anzali said that he did not trust the latest development and hoped that he could help his daughters, aged 12 and nine, avoid the ordeal of a possibly lengthy detention. Other reports suggest that these fears may be well founded. Michigan’s WILX news network was among those to report that a five year old child had been detained for approximately four hours at Washington-Dulles International Airport. The report indicated that while the child is a US citizen, his mother is from Iran and this was sufficient to raise questions about his susceptibility to the ban.

This detail is upheld by at least one other incident, in which an Australian teenager was barred from obtaining a visa to visit the United States for a trip to space camp, because his parents had emigrated from Iran. According to Gizmodo, although the young boy did not originate from the Islamic Republic, his parents’ Iranian identity mean that he holds dual citizenship. In the confused first days of the Executive Order, the US State Department indicated that even citizens of close US allies like Canada would be not be permitted to enter the US if they also held passports from one of the seven countries named on the ban list.

Although this case was a relatively minor instance of personal disappointment, there were many other cases in which the order threatened to seriously interrupt the lives of people who were already lawful permanent residents of the US, and still other cases in which this actually happened. Mass Live reported on Monday that the Department of Homeland Security had announced that 392 green card holders had been granted access to reenter the country in the wake of the federal court’s partial suspension of enforcement. But many of these were detained for multiple hours.

The article named University of Massachusetts Ph.D. candidate Alireza Ghodrati as an example, specifying that he had traveled to Iran for his father’s funeral, leaving behind a wife and a son, both US citizens, before the executive order was signed. The story evoked the same sentiments about divided families as were expressed by Coleman, the Nashville aid worker. And these sentiments were repeated in an Al Jazeera report that began with the story of a green card holder who no longer expects to follow through on plans to visit his mother in Iran for the springtime holiday of Nowruz.

The report goes on to quote Mahmoud Kashani, a factory owner who frequently travels between Iran and the US, as placing this latest series of developments in context with the landmark 2015 nuclear agreement and saying, “I had visited the US during the worst times between Iran and America. I never imagined that after the nuclear deal the situation will get worse.”

Indeed, the USA Today declared that the travel ban would further complicate an “already complicated relationship” between the two countries now that President Trump has taken office amidst promises to cancel or renegotiate the Joint Comprehensive Plan of Action. Tehran has rejected Trump’s statements to this effect and has also suggested that it would retaliate against any measures that seem to undermine the deal. What’s more, the Islamic Republic has already retaliated against the executive order itself, and many critics of Trump’s action are concerned about the possibility of that action further inflaming already vigorous Iranian propaganda.

Speaker of the Iranian Parliament Ali Larijani went even farther, saying of American policymakers as a whole that the order had “exposed their brutal racist manner hidden behind their demagogic veneer which pretends to be pro-democracy and pro-human rights.”

By contrast, the Iranian Foreign Ministry, headed by Western-educated Foreign Minister Mohammad Javad Zarif, was somewhat more delicate in its wording but nonetheless pushed an unrestrained narrative about the character of the American government. That statement was published in its entirety by Eurasia Review, and it accused the US and its allies of “fomenting and expanding terrorist groups,” including ISIL.

The statement also made a clear effort to direct the Iranian people’s sentiments against the US government and in favor of Tehran. It referred to “baseless claims” of American friendship with those people, and was full of self-praise for the Iranian regime, which promised to “respond as deemed necessary” to the executive order and all other perceived violations of “international obligations” by the US.

In fact, the administration of Iranian President Hassan Rouhani has already retaliated against the travel ban by instituting a similar ban on travelers from the US to the Islamic Republic. The Foreign Ministry attempted to present itself in a better light than the US government by claiming that Tehran’s measure would not be retroactive against people who already held valid visas. But this claim was seemingly belied by a report in New York Daily News which found that two Americans who had been playing basketball as part of the Iran Super League were stranded in Dubai after a period of leave and might not be permitted to return to Iran to collect their personal belongings, much less to finish their season.

Of course, many Americans and residents of other Western nations had already been subject to a de facto ban on travel to the Islamic Republic, as the Intelligence Ministry and the Revolutionary Guards have been prosecuting a major crackdown on supposed pro-Western sentiment in the wake of the nuclear deal, leading to several arrests of dual nationals and foreign visitors including San Diego graduate student Robin Shahini, Iranian-American businessman Siamak Namazi, and the Iranian-British charity worker Nazanin Zaghari-Ratcliffe, whose two-year old child Gabriella is also stranded in the country in the care of her grandparents, after her passport was confiscated at the time of her mother’s arrest.