They tried to bury us, they didn’t know we were seeds.

• Prosecute the perpetrators of the 1988 Massacre

• Adopt a firm policy towards the theocratic regime ruling Iran

As nationwide protests and strikes continue across Iran, entering their ninth month of continuous uprisings, and at a time where the cry for regime change and freedom is echoing throughout Iran; Iranian communities in over 20 capitals and major cities across Europe and North America, will come together in a new innovation, on Saturday, 25 August, in a joint, interactive conference to commemorate 30,000 political prisoners who were executed in the 1988 massacre in Iran.

The nationwide popular uprisings today, are the continuation of the aspirations and paths of those fallen for freedom in 1988. Those who said ‘no!’ to the henchmen and sacrificed their lives for freedom in Iran.

The Iran protests derive from deep roots within such sacrifices, and now, intertwined with the Iranian resistance, the chimes for regime change have been rung. The roots of the nationwide uprisings and its prospects will be discussed in this international conference. 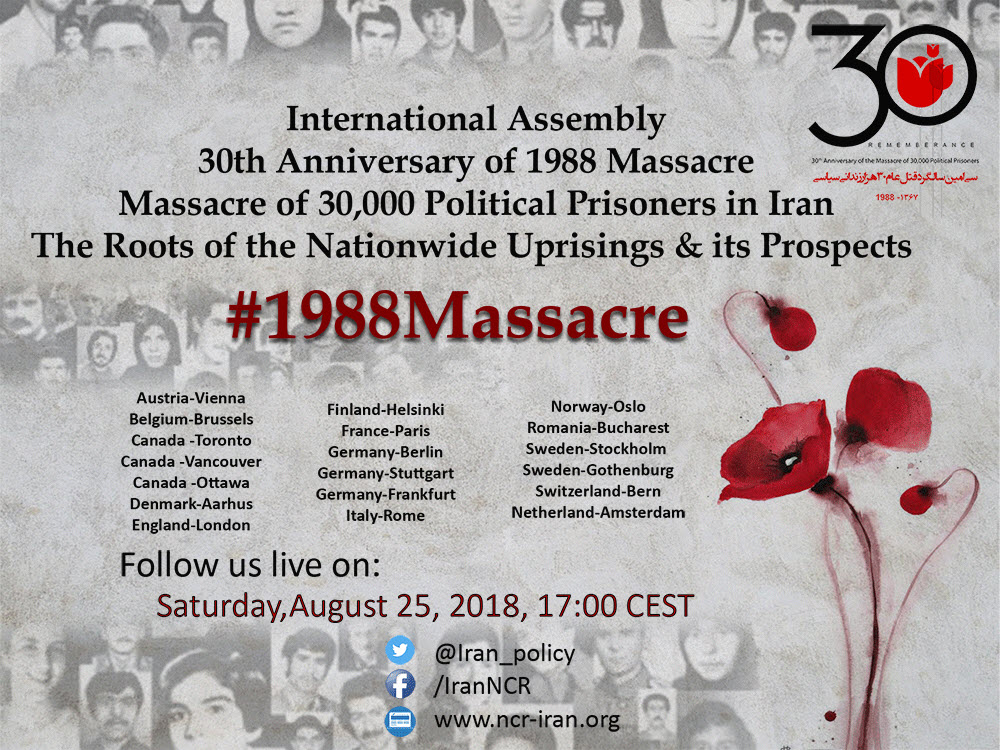 The conference, which will bring together thousands of Iranians in Europe and North America for the first time online, is part of the international campaign seeking justice for the victims of the massacre. A campaign which was launched two years ago with a call by Maryam Rajavi, President-elect of the NCRI, and demands an independent inquiry by the UN into the massacre, putting an end to the impunity of the perpetrators of the 1988 massacre. A massacre which has been highlighted by human rights NGOs, experts and defenders, as one of the worst crimes against humanity since World War II.
Perpetrators of this massacre are now among the highest officials in the regime and are directly involved in suppressing the uprising.

Thousands from across the Iranian diaspora and representatives of Iranian Associations, along with prominent international social and political personalities will gather in Paris, London, Berlin, Frankfurt, Stockholm, Amsterdam, Rome, Oslo, Brussels, Bern, Ottawa, Toronto, Vancouver, Bucharest, Helsinki, Gothenburg, Aarhus, Stuttgart. Survivors and relatives of the massacre will also share their experiences and observations with the participants.
Congressman Patrick Kennedy and a number of European lawmakers, will be among the participants at the Paris conference.

This international gathering of the Iranian communities will begin at 5 pm CEST and 11 am EST and will be broadcasted live in Persian, English, French and Arabic on social network and websites of the Resistance and Iranian communities.
Together we can echo the voice and message of this event!

What you can do:

• Inform friends, family and activists interested in human rights and Iran Protests of the event.

• Share the live broadcast of the gathering on social media to better echo the call for justice and democracy in Iran.

You can tune in live on the following networks:

• Ask your local media and news outlets to cover the conference and report on the aspirations of the Iranian community.

Undoubtedly, as the President-elect of Iranian Resistance pointed out in her message, “The nationwide uprising persisting today is the continuation of their perseverance of resistance units and the pioneers of the call-for-justice movement continue the path of those heroes.”

In 1988, based on a fatwa by Khomeini, more than 30,000 political prisoners who were serving their sentences were executed for standing their grounds in defense of democracy and human rights. To expedite the executions Khomeini formed three-member death committees throughout Iran to sentence the prisoners to death within a few minutes. The victims, most of whom were members of the PMOI, were buried in mass graves. So far, no independent international investigation has been carried out in regards to this massacre, and the perpetrators of this terrible crime have never been brought to justice.

In an audio recording which was revealed in 2016, Hossein Ali Montazeri, Khomeini’s successor at the time, explicitly tells the Death Commission in Tehran that what is being carried out is the most heinous crime of the Islamic Republic in Iran’s history. In April 1989, Khomeini dismissed Montazeri for his opposition to the massacre and wrote after me you would give the country to the liberals and through them to the PMOI/MEK. In June of that year, after the death of Khomeini, Ali Khamenei became Iran’s Supreme Leader.

In recent months, many human rights organizations such as Amnesty International have presented reports on the 1988 Massacre, calling for investigations in this regard and have called for urgent reaction to the destruction of mass graves by the mullahs.