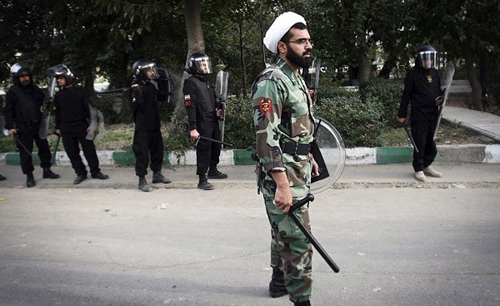 Among the latest examples of this, Ya Libnan reports that the Vice-Speaker of the Iranian Parliament, Mohammad Hassan Aboutorabifard explicitly compared his nation’s air defense to those of Israel, asserting that “Iran’s airspace is the safest in the region.” He also reiterated other officials’ claims that a new Iranian missile defense system constitutes the region’s “real Iron Dome,” co-opting the name given to a US-Israeli missile defense system.

The Indo-Asian News Service adds that Hossein Chitforoush, an Iran Air Force spokesperson claimed on Wednesday that the Islamic Republic had begun mass-producing its own Sa’eqeh fighter jets, and that these would be “altered and modified” to improve Iran’s air defense in the near future.

If these sorts of statements can be read as part of a broader refusal to defer to those who seek greater diplomacy and cooperation between Iran and the Western world, the same can be said of some of Iran’s recent moves in the domestic sphere, as well.

For instance, a Tehran appeals court had upheld the ten-year prison sentence for Omid Kokabee, a physics graduate student who was arrested in 2011 and convicted the following year on charges of “contact with hostile states.”

The confirmation of this sentence apparently disregards the recent decision by the Iranian Supreme Court indicating that the convicting court had no basis for the conviction, due in part to the fact that Iran is not in a state of hostility with the United States, where Kokabee was studying prior to his arrest. In a letter from prison in 2013, Kokabee indicated that that arrest had come in the wake of his refusal to contribute to an Iranian weapons project, a stand which earned him the American Physical Society’s Andrei Sakharov Prize for “his courage in refusing to use his physics knowledge to work on projects that he deemed harmful to humanity, in the face of extreme physical and psychological pressure.”

If this was indeed the motivation behind Iran’s arrest and imprisonment of Kokabee, the upholding of his sentence in contradiction to the judgment of the Supreme Court may be indicative of continued commitment to cracking down on those who might stand in the way of the military development that Iranian officials are so often boasting about.

Additionally, this disregard for the opinion of a higher court raises serious questions about the rule of law in Iran. It highlights the vague charges that often justify political imprisonment, which are open to interpretation in widely divergent ways. The law that Kokabee is accused of violating fails to clearly define “hostile states,” leaving open the possibility of that phrase being interpreted very liberally to suit a politically motivated case. The same can be said of other phrases like “insulting government officials,” “insulting the Prophet,” and “enmity against God.”

Of course, the latter two charges by their very nature legally enshrine repression of non-Muslim faiths, and this is also something that regime officials have apparently remained committed to in the midst of perceived expansion of dialogue with the world community.

The Assyrian International News Agency provided new information about the arrests of Iranian Christians that had been reported on Wednesday by Bos News Life. The update explains that Pastor Victor Beth Tarmez and two Christian converts had been arrested at a Christmas party at his home after Tarmez had previously been targeted by the regime for his teaching of Farsi language classes as his former church. Such activities are viewed as encouraging conversion, and thus threatening the ruling Islamic system.

During the arrest, security agents confiscated personal belongings and videotaped the faces of each of the 14 guests at the evening’s party – a tactic that allows the Intelligence Ministry to track people who have associated with undesirable events and movements, and to intimidate them into believing that their subsequent activities may be monitored.

For opponents of the Iranian regime, such repression of minority religions and other ostensibly threatening movements lead to the conclusion that that regime is little different from non-state-based Islamist movements like Al Qaeda and the Islamic State. Indeed, The Tower reported on Thursday that Arabic-language media is increasingly drawing comparisons between Iran and IS on point of their treatment of women, from forced veiling to efforts to compel women to remain in the home instead of in workplaces and the public square.

Notwithstanding negotiations over Iran’s nuclear program, these sorts of comparisons aim to raise serious questions about the compatibility between Iran and Western values, and about the viability of plans for broader rapprochement between the two parties.