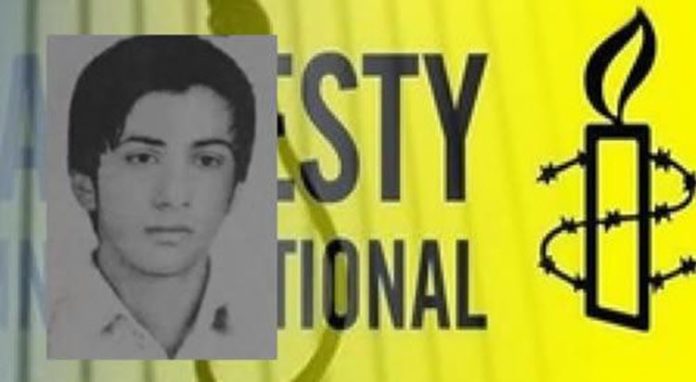 His trial was completely unfair and unjust as it relied on “confessions” that authorities got from him after periods of torture. It is unthinkable that officials in Iran will use medieval methods of torture such as floggings, beatings and suspension from the feet and arms as a way of getting a prisoner to “confess”.

However, despite how unthinkable this is to many of us in the West, this is something that happens on a daily basis in the Islamic Republic of Iran. The media has portrayed this and human rights organisations have condemned Iranian authorities for it.

Woman and minors are not even spared this harsh treatment. In fact, Iran is one of the last few countries that still executes minors.

Amnesty International has commented on the execution of Alireza Tajiki, saying that Iran is defying its obligations according to international law and is ignoring the massive opposition from home and abroad. The organisation’s Deputy Director for the Middle East and North Africa, Magdalena Mughrabi, said that the Iranian regime is, once again, showing that it has no respect whatsoever for the rights of children. She said: “This shameful act marks a critical turning point for Iran, and exposes the hollowness of the authorities’ claims to have a genuine juvenile justice system.”

She added: “This execution is a flagrant violation of Iran’s obligations under the UN Convention on the Rights of the Child, which it ratified two decades ago. By putting Alireza Tajiki to death, the Iranian authorities have demonstrated their appalling commitment for continuing with this abhorrent practice and shown they do not even have the will to implement their half-hearted reforms to save the lives of those convicted as children.”

Iran is no stranger to using the death penalty, even for minor offences. The regime has “morality” police that will enforce the regime’s idea of suitable dress and will arrest, fine or punish people carrying out activities that they class as crimes. Some examples include not being veiled properly, women who ride bicycles, women who participate in sports, etc.

The Iranian regime is so fearful of the people of the country that it tries to keep them under control with harsh punishments like this. However, the people will not be silenced and will never back down to such oppression. The regime will be taken down by the will of the people who want nothing more than peace and freedom.