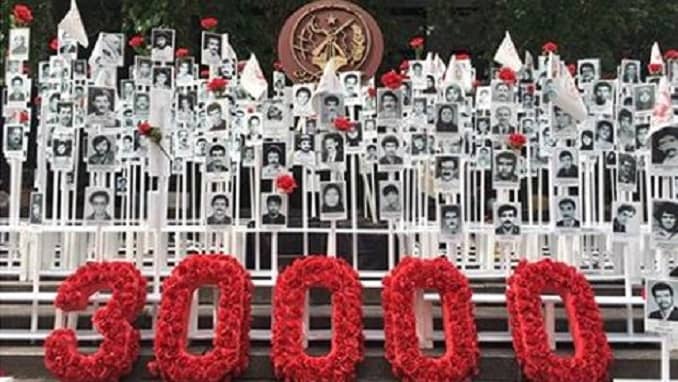 Some of the relatives of the 30,000 People’s Mojahedin Organization of Iran (PMOI/MEK) members and supporters massacred by the regime in 1988 gathered at a mass grave in Khavaran recently to demand justice for their loved ones’ death.

The regime formed Death Commissions that put on staged trials of political prisoners, mostly affiliated with the MEK prisoners – even those who had already been sentenced or who had finished their sentence. These five –minute trials essentially boiled down to one question: Do you support the MEK? Everyone who said yes was executed.

Now, 32 years after the horrific massacre ordered by Supreme Leader Ruhollah Khomeini, not one person has been brought to justice for this crime against humanity, even though the MEK has provided documents and interviews with survivors to prove who is responsible for this atrocity. Around 60 are still high-ranking regime officials. This includes Judiciary Chief Ebrahim Raisi and Justice Minister Alireza Avaei.

However, a lot of people have been arrested, beaten, imprisoned, and even executed for calling attention to the massacre of the MEK that the regime wants to keep hidden, which various groups and people, including Amnesty International and human rights lawyer Geoffrey Robertson QC, called a “crime against humanity”.

Khomeini’s heir apparent Hossein-Ali Montazeri even admitted that it was “the worst crime of the Islamic Republic” when he spoke to members of the Tehran Death Commission. He was subsequently stripped of his position and put under house arrest until his death in 2009.

The failure to bring the regime to justice has meant that the mullahs are emboldened to commit more crimes against humanity, such as the crackdown on the November 2019 uprising, where security forces shot dead at least 1,500 people in the street, or the harsh sentences issued to protesters, like the Afkari brothers.

The three brothers were arrested in the 2018 protests in Kazerun and Shiraz; two were sentenced to lengthy prison terms and dozens of lashes on trumped-up charges because they dared to advocate for their rights, but Navid Afkari, 27, was given two death sentences.

Maryam Rajavi, the president-elect of the National Council of Resistance of Iran (NCRI), has urged the United Nations Secretary-General, High Commissioner for Human Rights, and Human Rights Council to prevent this execution by compelling the regime to commute the sentence. She highlighted that protester Mostafa Salehi was already executed this year for taking part in protests in 2018.

On August 28, she tweeted: “I urge the UN Secretary-General, High Commissioner for Human Rights, and Human Rights Council to immediately intervene to stop the execution of Navid Afkari.”

The MEK wrote: “The international community has failed to address these terrorist crimes, which has meant they have continued unabated. The United Nations General Assembly is about to take place and it is time the regime’s worst crimes at the 1988 massacre were discussed.”

Indeed, if the regime goes unpunished, the mullahs will continue its killings and oppression.