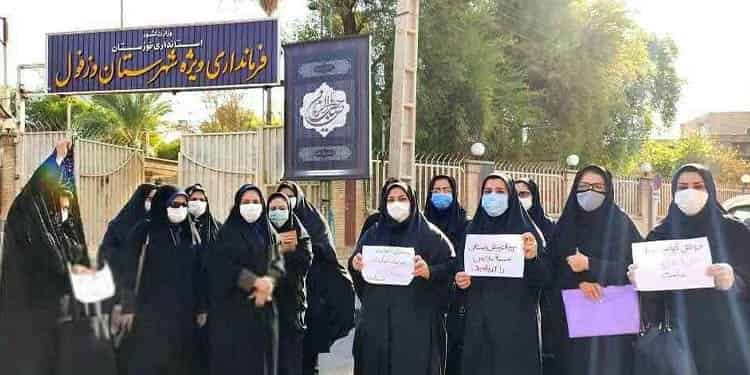 The workers in Iran’s oil and gas refineries, petrochemical industries, and power plants, have been on strike for over a month now, with the protests spreading to dozens of cities in 12 provinces.

At the same time, Haft Tappeh Sugarcane Company workers in Shush, Khuzestan province, have been on strike for over two months, with daily protest rallies.

These protests are, at the end of the day, the result of the regime’s poor economic decisions that have made corruption an integral part of the financial system. But the regime cannot change its system without endangering their rule. They are deadlocked.

The regime is terrified that these protests will spread across Iran, given the explosive state of the society, but they also fear that cracking down harshly on the workers – who have been deprived of the wages for several months – will result in a nationwide backlash. They also cannot (and don’t want to) meet the demands of one sector or other sectors will come forward with their demands.

The regime has tried to keep a low profile, making only vague and hollow promises to workers with the hope that this will pass and that things remain the same, with the workers giving in because they’re too tired to fight.

They are using other methods to intimidate the protesters though, including trying to cause rifts between protesters and not-so-subtly threatening them with prison and death sentences. They did this by executing or confirming death sentences against those arrested during the 2018 protests, like Mostafa Salehi, who was executed and had his property posthumously confiscated from his wife and children, and the three brothers in Shiraz, who were given execution, imprisonment, and flogging sentences for bogus charges.

Maryam Rajavi, the President of the Iranian Resistance, condemned the brutal sentences and called on all Iranians, especially the youth, to protest because the regime is measuring the response of the people to see how hard they can crackdown before the mullahs are in danger.

Other recent protests include the residents on Abolfazl village, Ahvaz, who have been forced out of homes that they’ve lived in for decades because one of the mullahs’ foundations claims to own the land. The residents, who have lived on the land since before the Mostazafan Foundation was founded, have been brutally attacked by regime authorities.

The foundation was forced to retreat, which shows how much the mullahs fear the people’s anger, but they will be back as soon as attention turns elsewhere.

Iranians Continue Protests; at Least 37 Rallies and Strikes from April 8 to 11

Iranians Continue Protests; at Least 37 Rallies and Strikes on April 6 and 7

Iranians Continue Protests; at Least 37 Rallies and Strikes from April 8 to 11

Iranians Continue Protests; at Least 37 Rallies and Strikes on April 6 and 7