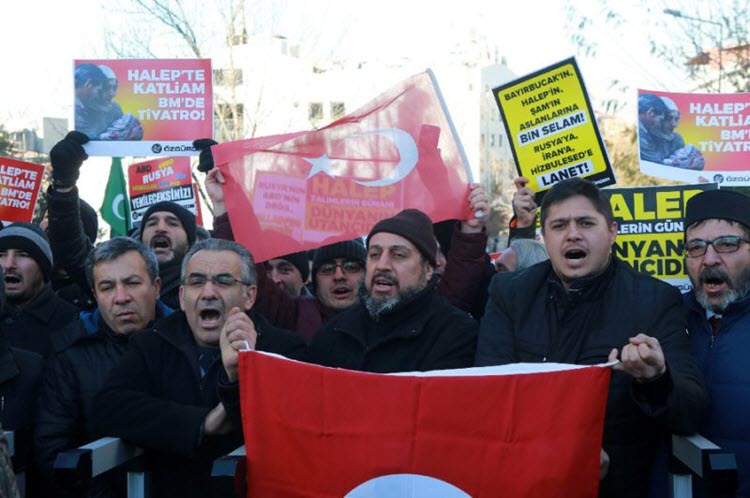 Yahoo News reports that, “Protesters held flags of the Syrian opposition as well as placards saying: Massacre in Aleppo, theatre at the UN.”

The day before, more than 1,000 people gathered outside the Iranian consulate in Istanbul to demonstrate over what they said was a “massacre in Aleppo”.  Turkey provided support for the Syrian opposition and called for Assad’s ouster.

As the horror in Aleppo has unfolded, protests have been staged in several European cities.  Danish police said as many as 7,000 people braved freezing temperatures in Copenhagen on Wednesday night, to protest against the operations in Syria. “I’m here tonight to show my (solidarity) with the Aleppo people. And this is the only thing I can do,” stated Calle Henriques, a retired restaurateur.

According to Yahoo, “Two banners reading “Save Aleppo” and “Stop the killing” were hung on a stage where speakers and performers were standing, as hundreds of demonstrators carried torches handed out by the protest’s organisers.”

The lights of the Eiffel Tower were switched off, while several hundred marched in Paris and to show support for the people of Aleppo.

There were protests in Sarajevo, which itself suffered being pounded by Bosnian Serb forces for 43 months during the 1992-1995 war.

A statement issued on Thursday by 25 NGOs providing humanitarian support to over five million Syrians, condemned the international community over its “hollowness, inefficacy, and moral bankruptcy” in Aleppo.

Organisations including the Syrian American Medical Society urged the international community to “insist on independent observers (the UN or other external actors) to be present” for civilian evacuations from Aleppo.

On Thursday under an evacuation deal brokered by Turkey and Russia hundreds of civilians and rebels were allowed to leave eastern Aleppo.

The Daily Sabah reports that two days of protests in Ankara and Istanbul have targeted Iran over the killing of civilians in Syria’s Aleppo by militias backed by Tehran.

Iran’s involvement in the conflict aggravates atrocities committed on civilians and the country now faces a public backlash in Turkey.  Turkey has historic ties with Syria and hosts about 3 million migrants who fled from assaults by the Assad regime that targeted civilians.

According to the Daily Sabah, “Hence as the Iranian-backed militia moved to block the evacuation of civilians from Aleppo, a city besieged by the Assad forces that indiscriminately target civilians, the Turkish public lashed out against Iran as an ‘accessory to murder’, as some banners in an anti-Iranian protest in Turkey read.” The militia is accused of firing at civilians.

Hundreds of people from several Turkish-nongovernmental organizations, accompanied by Syrian students living in Turkey, convened outside the Iranian embassy in the capital of Ankara on Wednesday night, to protest the killing of civilians in Aleppo.

An angry crowd protested the airstrikes and shelling of some 100,000 civilians who are trapped by the militia and regime forces in the ruined city. Yahoo reports. “The protest followed earlier rallies outside the Russian embassy and Iran’s Istanbul consulate, where demonstrators memorialized civilians killed in the attacks that are targeting residential areas of Aleppo.” ‘Killer Iran, Get out of Syria’ and ‘Aleppo is shameful for the whole world’, protesters chanted’.

The demonstrators issued a joint statement, saying that although mankind’s history was stained with massacres and genocides, Aleppo was different. “It has been happening before the very eyes of the international community and is being broadcast live,” they said. “We have witnessed human rights and humanitarian values promoted by the West being trampled,” the demonstrators said.

The statement acknowledges that merely protesting Iran would not achieve any success, but that they aimed to raise awareness among states and governments. “Iran is a killer in this region, and this should be acknowledged by more people. Iran helped the United States during the occupation of Afghanistan and Iraq. Today, it is the architect of massacres in Aleppo,” the statement says.

The escalating conflict in Syria strains the ties between Turkey and Iran, as Ankara is one of the staunchest opponents of the Assad regime. Turkey was also critical of the Iran-backed militia operating in Iraq, where efforts are underway to liberate Mosul from Daesh.

Turkey is pursuing diplomatic efforts through talks between Turkish, Russian and Iranian officials to maintain a cease-fire in Aleppo, and the continuing evacuation of civilians. Turkey hopes to expand the cease-fire across Syria in talks scheduled for Dec. 27 in Moscow.