“With or without hijab, we conclude the revolution,” “Death to the oppressor, be it the shah or a supreme leader,” “Death to Khamenei,” “Kurds and Baluchis are brothers and despise [Khamenei],” “We don’t want a child-killing regime,” “Death to the Revolutionary Guards,” “I will kill those who killed my brother,” “Khamenei is a murderer; his rule is illegitimate,” “Basiji, IRGC, you are our ISIS,” “Poverty, corruption, high price, we continue to overthrow [the regime],” and “Death to Basij,” chanted Iranian Baluchi women and men.

“Our Baluch compatriots rose again today in step with the nationwide movement to seek justice for those who laid down their lives for the freedom of Iran,” said Mrs. Maryam Rajavi, the President-elect of the National Council of Resistance of Iran.

December 2 marked the 78th day of anti-regime protests in Iran. The demonstrations began following the heinous murder of Mahsa Amini, 22, in police custody. However, it immediately turned into a revolution against the entire theocratic regime.

According to the Iranian opposition Mojahedin-e Khalq (MEK/PMOI), the protests have extended to 279 cities. The regime has killed more than 680 citizens, injured tens of thousands, and detained over 30,000. The MEK has published the names of 555 killed protesters.

Over 680 people killed and more than 30,000 arrested by the regime's forces. The PMOI/MEK has published the names of 555 killed protesters.#IranRevoIution#مرگ_بر_ستمگر_چه_شاه_باشه_چه_رهبر pic.twitter.com/NETOCJN9Vd

Tehranpars residents chanted “Death to the dictator” after midnight. Source

Protesters in Sar Jangal started a fire outside a local state police station while chanting “Death to Khamenei!” Source

More footage of Zahedan locals continuing the nationwide protests against the regime on the 78th day of the uprising. Source

We fight and take back Iran! Source

For each person killed another thousand will rise! Source

Locals in Zahedan held a protest rally in the city’s Kowthar Square. Source

Locals in Ashuri district threw Molotov cocktails in an attack targeting a base of the regime’s IRGC paramilitary Basij Force. Source

Locals gathered to mark the third day of the murder of Hamed Salahshouri by regime security forces began chanting: Death to Khamenei! and This is the year Seyed Ali (Khamenei) is overthrown! Source

Locals gathered to mark the third day of Mehran Samak’s murder by the regime’s oppressive security forces began chanting: This is the year Seyed Ali (Khamenei) is overthrown! Source 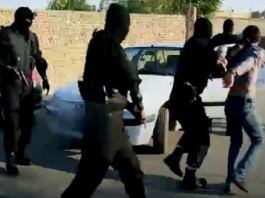