On Friday, November 4, 2022, citizens resumed protests across Iran. Thousands of worshippers rallied in mosques of Khash, Zahedan, Saravan, Rask, Suran, Sarbaz, Iranshahr, and other cities in Sistan & Baluchestan. However, as in previous weeks, the Friday Prayer turned into anti-regime demonstrations.

“Death to Khamenei,” “Death to the dictator,” “This is the year of [Khamenei] overthrow,” “Death to the regime’s principle,” and “Mullahs must get lost,” widely chanted by protesters.

Footage shows security forces heavily shooting at protesters in Khash. Iranian dissidents TV Channel Simay-e Azadi reported that the regime killed at least eight citizens and injured over 60 across the province as of the afternoon.

Responding to the regime’s atrocities, defiant youths in Khash attacked the local governorate, taking over it and set there ablaze. Furthermore, protesters torched murderers’ vehicles.

November 4 marked the 50th day of anti-regime protests in Iran. The demonstrations began following the heinous murder of Mahsa Amini, 22, in police custody. However, it immediately turned into a revolution against the entire theocratic regime.

According to the Iranian opposition Mojahedin-e Khalq (MEK/PMOI), the protests have extended to 213 cities. The regime has killed more than 480 citizens, injured tens of thousands, and detained over 25,000. The MEK has published the names of 324 killed protesters.

Over 500 people killed and more than 25,000 arrested by the regime's forces. The PMOI/MEK has published the names of 324 killed protesters.#IranRevoIution#آزادی_آزادی_آزادی pic.twitter.com/6N4gDEJL88

November 4 was also the tenth anniversary of the late Sattar Beheshti, 35, tortured to death by authorities in Tehran’s notorious Evin prison in 2012.

#IranRevolution
"I won't complain if they fit the noose around my neck right now. Because this is not life, this is slavery. Death is too much honorable than such life," said the late #SattarBeheshti🌹

Citizens in #Iran honor him on his 10th martyrdom.pic.twitter.com/Lr5pwa8lEO

Further footage from conflicts outside the local governorate in Khash shows citizens trying to take over the site despite the Revolutionary Guards (IRGC) forces direct shooting. [Footage]

A large number of Zahedan citizens continue anti-regime protests despite bloody suppression, chanting: “Death to Khamenei!” and “Death to the dictator!” [Footage]

A large number of Saravan youths continue anti-regime protests despite bloody suppression, chanting: “Death to Khamenei!” and “This is the year of [Khamenei] overthrow!” [Footage]

A large crowd attends the late Shirin Alizadeh commemoration ceremony in Bagh-e Rezvan cemetery, chanting: “Swearing martyrs’ blood, we resist until the end!” and “1,000 people are behind every slain protester!” [Footage]

“In his last Instagram story, my son wrote: You stay back, I give my life for your freedom,” says the mourning mother of Roozbeh Khademian, 32, killed by security forces in Malard, Karaj, on September 21. [Footage] 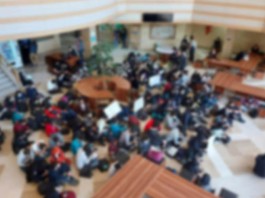 “Referendum and Reform Are the Regime’s Trick,” Iranians Chant – Day...