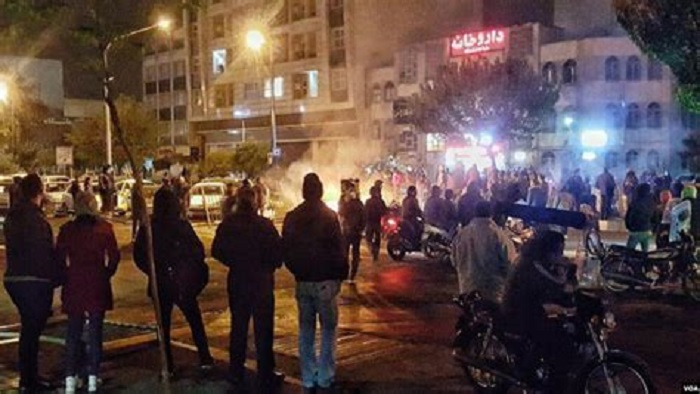 An Iranian regime insider had warned senior regime officials of an uprising coming at the end of 2020 that could see the mullahs overthrown.

On Sunday, Hassan Biadi said: “Up to Christmas of this year, there is a high possibility that we will witness unexpected political and social developments. Taking into consideration all the mismanagement we are seeing across the country; people are no longer listening to various parties and are not happy with the current circumstances. Remarks and pledges made in the past have been of no use.”

He advised that the regime should not ignore that these problems were created by the failures of those “associated with rich and powerful entities”, which have a “significant influence in many important political and economic organizations”.

State-run daily Mardom Salari appeared to agree on Monday, with an article about a new uprising caused by increased social gaps

It read: “The only method to escape this impasse is usually violent tools and methods… The protests were seen in December 2017, January 2018, and November 2019, and the fact that they were dealt with improperly, are not good examples as they did not render the preferred results. Naturally, violent measures have highly negative consequences.”

In the November 2019 uprising alone, 1,500 civilians were murdered by the regime, according to the People’s Mojahedin Organization of Iran (PMOI/MEK), who have named hundreds of the victims.

The MEK wrote: “Atrocious reports and footage of dead bodies being found in rivers and near dams, especially close to Ahvaz, southwest of Iran, also indicated that the mullahs’ regime went the distance to cloak its atrocities. This also indicated the desperate need of a regime facing enormous hatred from a public hellbent on overthrowing their despotic rulers.”

Mrs. Maryam Rajavi, the President-elect of the National Council of Resistance of Iran (NCRI), described the massacre as a “shocking crime”, saying that it was “one of the most horrific crimes of the 21st century” and a “crime against humanity”.

Mrs. Rajavi urged the United Nations to condemn this crime and dispatch a fact-finding mission to Iran’s prisons, while also calling for the UN Security Council to address the massacre and hold regime leaders responsible.

Rajavi said the international community’s inaction regarding the massacre has “scarred the conscience of contemporary humanity” and gave the regime “a green light to continue and intensify its crimes”.