The reason: While the Islamist regime funds terrorism throughout the Middle East, it oppresses its own people and exploits the people.

The mullahs’ security forces and militias respond to the protests with brute force – and shut down the Internet to cover up the violence.

In dozens of cities, demonstrators have been attacking government buildings, state-owned banks, state-owned firms, and the regime’s so-called seminaries, where they activate their reactionary ideology, since Friday night.

As in the previous waves of protest, women played an important role again.

The trigger of the renewed protests was a drastic increase in gasoline prices. But the reasons for the protests are deeper: Decades of mismanagement by the corrupt Revolutionary Guards (IRGC) and the young people’s longing for a life of freedom, dignity, and prosperity have led to hundreds of minor and major protests and strikes across the country since December 2017.

For the mullahs, the protests come at a critical time: In Lebanon and Iraq, hundreds of thousands are campaigning against the regime, too – Tehran controls both countries through powerful militias. While Iran is already confronted with uprisings in both countries, Iranians themselves are now taking to the streets against the regime.

The exact extent of the casualties is therefore still unclear. Amnesty International cited at least 106 fatalities, citing media reports, testimonies, and activists. The United Nations High Commissioner for Human Rights has been alarmed by reports that dozens of people have been killed in the use of live ammunition. Activists report far more than 200 dead.

The Revolutionary Guards – the paramilitary arm of the mullahs’ regime – reportedly refused to hand over the body of the killed demonstrators to relatives, presumably out of fear that the funeral celebrations would spark further protests.

From the Iranian people’s perspective:

On Friday, 22 November 2019, Ms. Dowlat Nowrouzi, the Representative in the UK for the National Council of Resistance of Iran (NCRI) took part in a live online press conference about the nationwide eight-day uprising in Iran and answered questions posed by journalists.

She said that the protests started last Friday with a stunning speed across the country. The regime engaged in bloody suppression, shut down the internet on 17 November to have the free hands for the suppression of the protests.

Shahin Gobadi: If noticed, both rifts within #Iran‘s dictatorship supported the brutal crackdown on #IranProtests.So any illusions of any differences between “hardliners”&”Reformists” is now over.#FreeIran #IranRegimeChange @gobadi pic.twitter.com/cUBKgcRx6S

She pointed out that despite the regime’s efforts, clashes are continuing in different parts of the country. The regime is extremely terrified of the re-ignition of the uprising. One obvious reason for this is that after eight days, the regime is still fearful; of restoring the internet.

She said that based on information provided by the Mujahedin-e-Khalq (PMOI/MEK),

Ms. Nowrouzi noted that from the very first beginning, the regime used all its suppressive forces, including the IRGC, the paramilitary Bassij, the Intelligence Ministry and plainclothes agents.

She said that regime officials repeatedly acknowledged the role of MEK’s Resistance Units in the uprising, noting that with the uprising, a page has turned in Iran and that the regime has entered its final phase. This is the beginning of the end for the regime.

Ms. Nowrouzi added that the uprising laid bare the murderous and barbaric nature of the regime, and the Iranian people realized that there is no difference between the regime factions. Hassan Rouhani put aside his moderate posturing and called for a total crackdown. 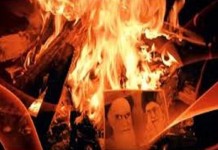 Iranian Supreme Leader Ali Khamenei has mentioned the “security” crisis that his regime faces, which is code for a threat of being overthrown, in...
Read more
Protests

Following the nationwide anti-government uprisings in December 2018 and November 2019, Supreme Leader Ali Khamenei talked of a “security” crisis for the regime and...
Read more
Protests

The Iranian regime has increased its oppression ahead of the anniversary of the November 2019 uprising in Iran in an attempt to counter possible...
Read more
Go to mobile version