Home News Iranian Opposition Khamenei Admits to the Leading Role of PMOI/MEK in Organizing and Leading... 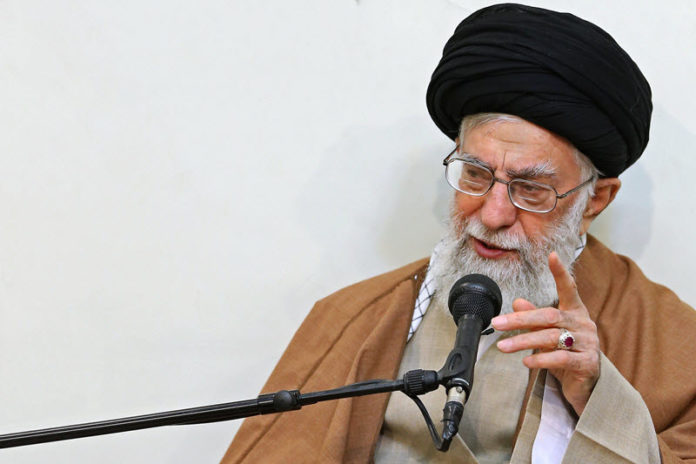 On Sunday, the IRGC declared victory over the protesters, although the Associated Press subsequently reported that the hardline paramilitary’s claims could not be independently verified. The National Council of Resistance of Iran reports that unrest continued in multiple cities on Monday, and it cited several specific examples including the obstruction of vehicular traffic outside Evin Prison and attacks on a government building in Mahshahr and a Basij militia base in Mobarakeh.

Last week, the IRGC attempted to claim that only 15,000 people had taken part in the demonstrations, but other sources indicated that gatherings were taking place in at least 80 towns and cities, some of which individually comprised thousands of participants. Iranian authorities’ own accounts of the extent of the crackdown on these demonstrations seem to have undermined the previous efforts to portray them as not being widespread.

Whereas earlier official statements had only admitted to a few hundred arrests, Member of Parliament Mahmoud Sadeghi announced on Tuesday that at least 3,700 people had been detained, according to Al Jazeera. This more than triples the most widely-cited figures from previous days. Most outlets continue to report on a confirmed death toll of just over 20 protesters, although the NCRI has reported that at least 30 people were killed in the first week alone.

In reporting upon Khamenei’s latest input on the demonstrations, Reuters points out that he took the unusual move of defending the people’s right to voice their grievances, provided that they do not threaten public security.

The supreme leader is the ultimate authority in all matters of public policy in the Islamic Republic, and early analyses of the protests emphasized that he would determine the government’s response to it. The above-mentioned figures clearly indicate that that response was a violent one, just as had been ordered by Khamenei in the wake of the Green Movement uprising following the disputed reelection of President Mahmoud Ahmadinejad in 2009.

Despite this fact, by paying lip service to the people’s right to protest, Khamenei may be betraying the regime’s concern over the possibility that the IRGC is wrong about the protests being at an end. Various independent analysts predicted the regime’s violent response but also expressed the view that that would engender further demonstrations at a later date, even if it was successful in putting down the current ones. With this in mind, even hardline Iranian authorities may see it as imperative to provide at least superficial concessions to the protesters in order to forestall such an outcome.

What is surely more important to those authorities, however, is controlling the public narrative about the protests and their impact. While it is impossible for Tehran to categorically reject the legitimacy of all protesters and their demands, it may be politically viable for the regime to focus attention on the economic frustrations that sparked the initial protests in Mashhad while disregarding the broader social and political demands as the manufacture of foreign infiltrators.

This is exactly what Khamenei sought to do in his latest public comments. Reuters noted that he used Twitter to deliver a message to the US and Britain, accusing them of plotting to overthrow the Islamic Republic and declaring, “You’ve failed, and you will fail in the future, too.”

The report adds that the IRGC had advanced similar claims about a foreign hand behind the recent unrest. Indeed, various regime authorities had been pushing this narrative since soon after the protests spread beyond Mashhad. And this strategy has not been limited to avowed anti-Western hardliners like the supreme leader and IRGC. It has also been employed by the supposedly moderate faction associated with President Hassan Rouhani.

The Associated Press reported on Monday that Foreign Minister Mohammad Javad Zarif had attended a security conference in Tehran that day, where he accused neighboring countries of fomenting insecurity within the Islamic Republic. Zarif declared that such efforts would backfire, in keeping with Khamenei’s assertions of Western “failure.”

While focused on the US and Britain specifically, the supreme leader’s statements also made mention of the neighboring countries, led by Saudi Arabia, that Zarif was surely referring to. Alwaght noted that Khamenei blamed the unrest on a “triangle” of enemies, consisting of the US and Israel on one side, Saudi Arabia and its regional allies on another, and the People’s Mojahedin Organization of Iran as their agents on the ground in Iran.

The PMOI itself has affirmed its own role as a leading organizational force in the recent demonstrations, but it maintains that participation in those protests was an expression of genuine popular sentiment, without any sense of foreign contrivance. Regime authorities, meanwhile, have failed to cite any evidence for their conclusion that Western interference contribute to the outbreak or spread of the protests.

Nevertheless, Khamenei and others have apparently been using that narrative to justify further anti-Western rhetoric and explicit threats against the US and other Western nations. Alwaght highlighted this trend when it reported that Khamenei’s recent comments included praise for the blows that the US has supposedly suffered at the hands of Iran’s Islamic revolutionary movement. The Iran Project indicates that the supreme leader conversely claimed the US had “inflicted damage” on Iranian society through its alleged support of the protests. “This will not remain unanswered,” he added.

Iran’s ambassador to the United Nations, Gholamali Khoshroo, was able to voice its accusations somewhat more directly in an emergency meeting of the UN Security Council that took place on Saturday, upon the request of the US. The Islamic Republic also received support during that session from some of its established allies, including Russia, which, like the United States, is a permanent member of the Security Council and a wielder of veto power.

In reporting upon the meeting, Al Jazeera concluded that it ended with member states’ representatives getting up “perhaps more divided than when they had sat down.” This speaks to the widening global divisions that seem to be emerging from the ongoing war of words between the Iranian government and the administration of US President Donald Trump. While the US, Saudi Arabia, Israel, and various other regional powers have shown increasing strategic alliance in response to their shared anxiety regarding Iranian influence, the Islamic Republic has begun to line up allies in explicit opposition to Western interests.

This latter phenomenon was expressly encouraged by Pakistani analyst Abid Ali Abid in the wake of the latest Iranian uprising, according to the Islamic Republic News Agency. Leaving aside somewhat more distant allies like Russia, Abid called for unity among Iran, Pakistan, Afghanistan, and Turkey, in the interest of countering American strategy in the region. Such commentary seems to capitalize on the official Iranian narrative about foreign drivers of domestic unrest in the Middle East.

Indeed, the head of one of the states mentioned by Abid, Turkish President Recep Tayyip Erdogan, specifically endorsed this narrative on Friday in what the Algemeiner described as a “verbal onslaught against the US and Israel.” Expressing anger over an American court’s sentencing of Turkish bank executive Mehmet Hakan Atilla for systematic violations of Iran sanctions, Erdogan called the case part of a “chain of plots” by the US. In this way, he connected his own government’s anti-US rhetoric to Iran’s claims of a US plot to overthrow the Islamic Republic.

Just as Iran has failed to demonstrate evidence for Western interference, Erdogan has failed to undermine the legal justification for the Atilla case. Nonetheless, both of these developments may point to the ways in which Iran and its allies can be expected to respond to other perceived threats to their domestic stability or international legitimacy. Indeed, anti-Western self-identity is central to the character of the Iranian regime, and that identity threatens to spread into a broader anti-Western bloc of nations.

Of course, it is natural that the US would express support for the recent Iranian protest movement, if only because some of that movement’s slogans expressed outrage at the expenditure of Iranian resources on foreign interventions that are aimed at spreading Tehran’s ideology and influence.