In our first piece, we looked at the speech of NCRI leader Maryam Rajavi, but now we will look the words of former New York Mayor and Donald Trump’s personal lawyer Rudy Giuliani, who has been an avid supporter of the MEK for many years now and has spoken at many MEK events.

Mayor Giuliani began by explaining the history of the MEK after the Iranian Revolution. (The MEK actually began in 1965 to fight the Shah, but the entire leadership were imprisoned in the 1970s and only Massoud Rajavi was spared execution thanks to an international campaign by his brother.)

Former NY Mayor @RudyGiuliani responds to lobbyists for Iran’s regime: The MEK is committed to freedom and democracy in Iran. We should support them to bring regime change in their country.#IStandWithMaryamRajavi #FreeIran #WeSupportMEK pic.twitter.com/LbTv9X2Z7K

Rajavi was released from prison in 1979 and forced to rebuild the MEK from the ground up as it had been all but destroyed by corrupt forces whilst the leadership were in prison.

Giuliani said that Massoud began the post-revolution MEK movement with “a very brave act”, which was refusing to swear allegiance to regime founder Ruhollah Khomeini. He then encouraged the international community to be that brave, asking if we were now at a point in history where we can stand up and say no to oppression and murder.

Giuliani said: “I accuse [Khamenei] and [Iranian regime President Hassan] Rouhani and all their followers, I accuse them of murder. Not just murder but mass murder. How can we tolerate this? Four decades of mass murder and crimes against humanity.”

The biggest victims of the mullahs’ crimes are the Iranian people; particularly those who support the MEK, and they have basically been abandoned by the world. Giuliani said that there are two things the international community must do to ensure peace and stability in Iran. 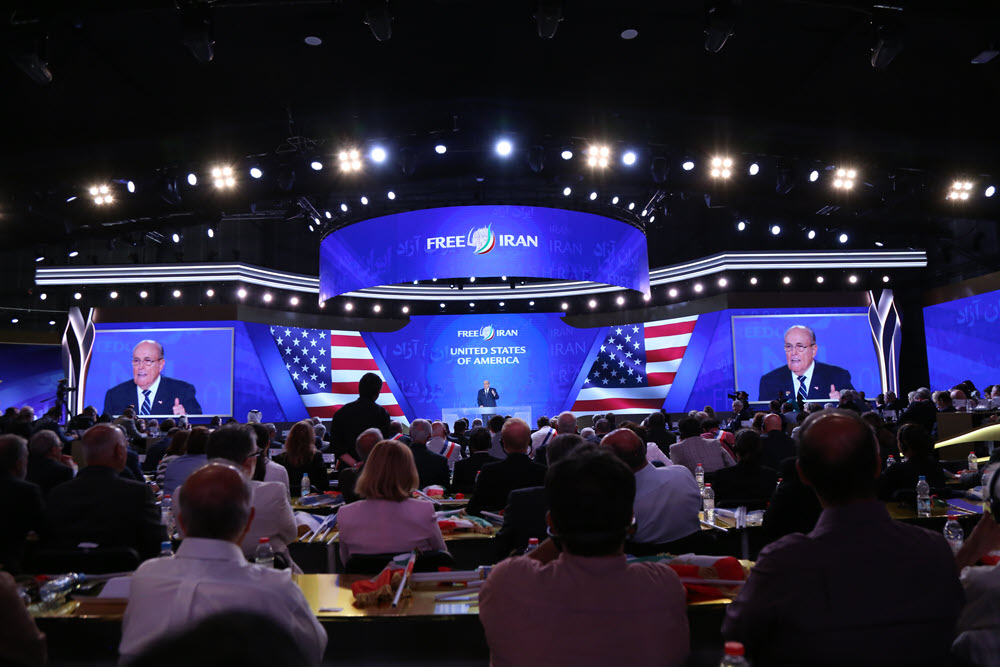 First, European governments must “stand up” and withdraw from the nuclear deal, as the US has already done, and stop giving money to “murderers”, which they will use to create nuclear weapons.

Second, the world must recognise that there is an alternative to the Regime and that is the MEK, its umbrella organisation the National Council of Resistance of Iran (NCRI), and Maryam Rajavi.

He said: “This isn’t one of those situations when we have to dispose of a regime and we know that a more horrible regime will come… We have the biggest sponsor of terrorism in the world and then we have the [MEK and NCRI], led by the President-elect Maryam Rajavi.”

He went on to talk about how the MEK has written down its principles – “Free elections in six months. Gender equality. System of law. Fair trial. And they oppose capital punishment” – in a clear 10-point plan for a Free Iran that will be fully enacted within six months of the mullahs’ fall.

Giuliani said: “[The MEK] is a group we can support and a group that makes us comfortable to have a regime change.”