The Resistance Unit network, which is directly associated to the Iranian opposition group People’s Mojahedin Organization of Iran (PMOI/MEK), have been collecting medicine, blankets, clothing, canned food, hygiene goods, and more to send directly to the people affected, as the Regime would only steal such goods.

One PMOI/MEK supporter said: “We are PMOI/MEK supporters responding to Mrs Rajavi’s message and sending our aid directly to our flood-hit compatriots. Some necessary medicine is being kept by the regime’s Red Crescent in its warehouses, refusing to provide them to flood victims.”

While another said: “I am from Iran’s Kurdistan region and I am responding to Mrs Rajavi’s call to express my readiness to provide further aid to flood victims. We sent yesterday to Golestan Province (northeast Iran).”

Others have also taken part in vigils for those lost in or affected by the floods.
A supporter who took part in a vigil for the flood victims in Shiraz, south-central Iran, said: “We lit a candle on behalf of the PMOI/MEK for those who lost their lives in the recent floods. This catastrophe was the result of the inhumane regime’s negligence and incompetence. We express our deepest condolences.” 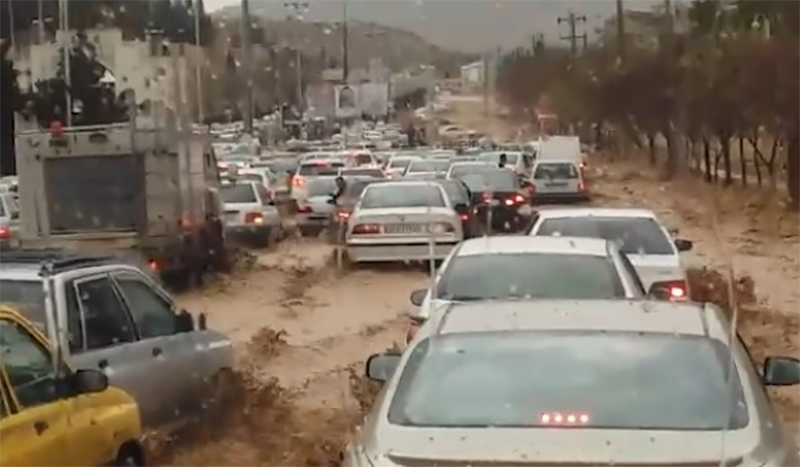 Even the Resistance Unit in Sarpol Zahab, Kermanshah, western Iran sent aid, despite the fact that many there are still living in trailers, 18 months after a devastating earthquake shook the region.

A Resistance Unit member there said: “To the deceitful [Supreme Leader Ali] Khamenei and [President Hassan] Rouhani, although you know nothing of shame, just take a look at how people who have been living in tents and trailers for more than a year now are providing aid from their very little belongings to those hit by floods in Golestan Province…

These are the same locals of Sarpol Zahab who are now sending the aid they received from locals after the earthquake to those who are in need in Golestan. Shame on you! Death to Khamenei and Rouhani. Viva the National Liberation Army of Iran, Hail to Rajavi.”

Members of resistance units in Marand and Kashan, northwest and central Iran, respectively, distributed leaflets quoting Maryam Rajavi saying, “The only method and best solution is to rise to the occasion ourselves and provide aid” to the flood victims.